Life, on the chessboard and otherwise, does not always smile kindly on staunch defenders of principle.

Take Tarrasch, for example, who famously once called 4. Ng5 against the Two Knights Defence a “duffer’s” move. It’s not difficult to see the old German’s point. After all Black has not broken any of the standard rules that guide opening play so it’s not obvious why White should be able to get away with moving a piece a second time to set up what appears to be a just a one-move threat. 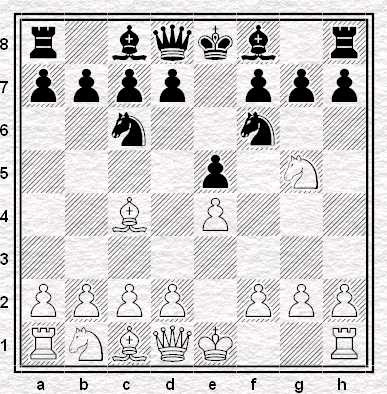 It just happens to be the case that while theory might be on Tarrasch’s side, practice isn’t. It may look like a childish way to play at first sight but the knight sortie is now considered the most testing move and commentators routinely begin their annotations of games that open with the Two Knights by wheeling out the duffer quote [e.g. see Fischer's 45th memorable game and just recently Waylon Smithers on Short-Sokolov at the 7th Staunton Memorial] thereby making poor Siegbert look a little silly.

Suck it up fella. 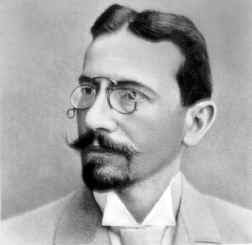 If Tarrasch didn’t like 4. Ng5 one wonders what he’d have made of an early … Be6 in the Queen’s Gambit Accepted and related positions. Not a lot I rather suspect. 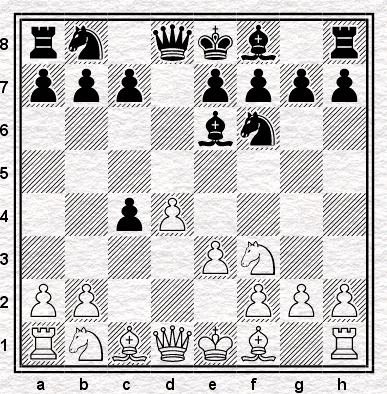 and a similar position that could have occurred in his own game which began with a Slav Defence. 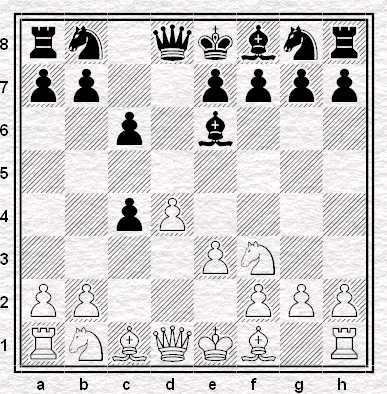 Again, general principles are clearly against the idea. By playing … Be6 Black blocks his e-pawn from moving and at a stroke prevents himself from contesting key squares in the middle of the board with his one remaining central pawn while also limiting the options for his dark-squared bishop. The light-squared prelate, for that matter, hardly has a life of opportunity to look forward to now that it’s tied down to defending that extra c-pawn.

… Be6 just looks like a total beginner’s move and hardly worth discussing at all. Yet when I saw EJH’s post I was immediately reminded of something I’d first seen in Ray Keene’s Flank Openings many years ago.

After 1. Nf3 d5, 2. c4 dxc4 Raymondo gives the famous game Botvinnik – Fine, Nottingham 1936 where White continued with 3. Na3 but also suggests that 3. e3 intending something like 3. … Nf6, 4. Bxc4 e6, 5. d4 c5 transposing into the Queen’s Gambit Accepted is the more common choice in modern times. Tucked away at the end of the section, though, he cites two games where Black countered White’s plan with 3. … Be6 !?/?! (delete according to your point of view). 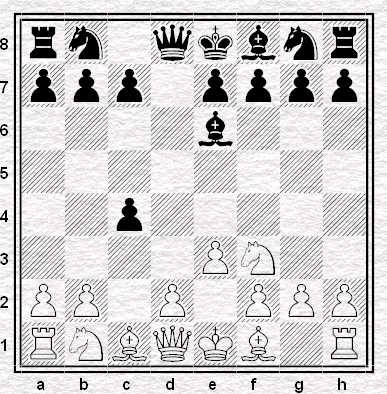 The player of the Black pieces on both occasions was none other than Paul Keres. True he lost against Geller (Moscow, 1963) and only beat Darga (Beverwijk, 1964) after some optimistic play from the latter but if somebody of his stature is willing to give 3. … Be6 a go it can’t be that bad can it?

I very much doubt that … Be6 in these kind of positions will ever be as popular or considered to be as good, objectively speaking, as 4. Ng5 in the Two Knights. GMs such as Lputian, Ljubojevic, Rozentalis, Ehlvest and our own Glenn Flear have been willing to follow in Keres’ footsteps which suggests that 3. … Be6 is good enough to be playable at club level but the fact that for the most part they’ve only done it once (and even then sometimes only in blitz chess) would rather indicate that the idea’s not strong enough to warrant making a habit of it.

Still, that it’s worth trying at all strikes me as unfair and marvellous in equal measure. There's also something rather pleasing about the revival of 4. Ng5 being driven by a mirror of Keres' concept of bishop development - Stellwagen's 8. Bd3. 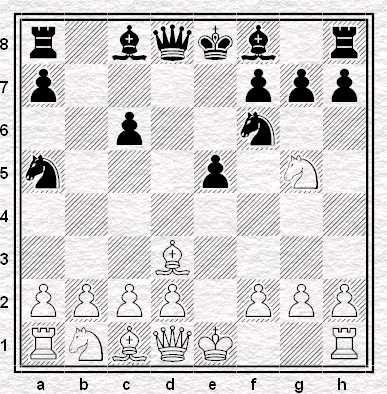 Tarrasch might not have liked any of these moves but perhaps he should have adopted a more flexible Marxist approach to ideology. Groucho that is not Karl.

“Those are my principles. If you don’t like them … well I have others.” *

In life and chess things sometimes end more happily with that point of view. 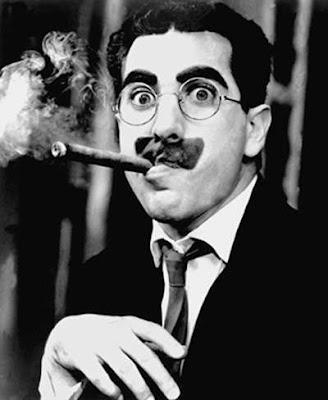 * Although it's surprisingly difficult to find out when and where Groucho uttered this particular bon mot. It's not in the Oxford Dictionary of Quotations and even those websites that give references for many of his sayings, e.g. here, don't help. EJH directs me to a website that suggests Groucho said it in Duck Soup but EJH also points out it is not included on the imdb page of quotes for the film - so perhaps it's specious (as suggested here).

Does anybody out there know for sure?

I don't know when 4.Ng5 was rehabilitated, but I do seem to recall that when there was a fad for 3.Bc4 in the Eighties, it was all 3...Bc5 rather than the Two Knights'.

Which should tell us something, because I don't see that anything other than 4.Ng5 tests Black at all. I can certainly say that, having myself moved from 3...Nf6 to 3...Bc5, I wouldn't have done so because of 4.d4 or 4.d3, neither of which is any real challenge at all. But I don't really believe that Black's got enough for the pawn in the duffer's variation and I don't think top GMs think so either.

Mind you, I'm not convinced that REO Stellwagen's move is likely to be what retires the Two Knights' Defence, either. If people are going to start playing it as standard, I might go back to the knight.

Incidentally - as ever, I find myself growling a little at the mention of general principles. Is it a general principle that when you've captured a pawn in the opening, it doesn't make sense to try and keep hold of it, especially if you are able to develop a piece in so doing and maintain the pawn somewhere which inconveniences the opposition? Or that if White points his pieces at f7 in an open game and Black does nothing about it, the latter should be able to get away with it?

'Those are my principles, if you don't like them...well, I have others'. I know the film 'Duck Soup' quite well and I can't remember those lines in the film. Definitely worth a watch for those who haven't seen it.

I take your point justin, but does the bishop on e6 count as developed?

Half and half would be my answer to that one.

I like the Reuben Fine quote of the day on chessgames today: "Really bad moves can always be refuted by general principles."