Ever wanted to play chess here? 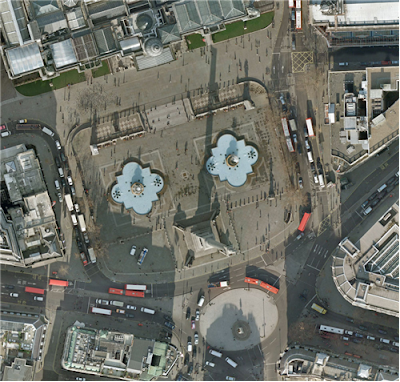 Where? I hear non-Londoners ask, not recognizing the shadow of Lord Nelson's Column reaching past the fountains, on toward the grassy banks of the National Gallery, proudly guarded by four imperial lions. Trafalgar Square of course, that's where.
Not especially, I hear London chess players answer. And if I did, couldn't I just take a pocket set?
But I should have told you more. I should have said, ever wanted to play here with a gigantic chess set, your pieces spanning the board from one fountain to the other; the board itself a mosaic made from glass, the ceramic pieces themselves towering two metres high? And all that the "centrepiece" of the London Design Festival and brainchild of Spanish designer, Jaime Hayón?
Well, guess what. Maybe you can. The chess games will be played from Saturday 19th to Wednesday 23rd September, and you can find the entry form on the London Design Festival Website. Good luck if you enter.
One word of warning, though. Look closely at this graphic from the website: 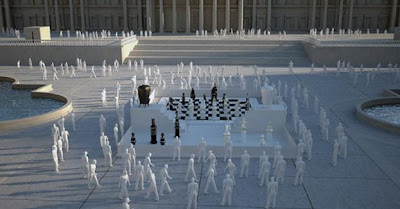 What colour square is that on the right hand side, do you suppose?
Posted by Tom Chivers at 10:01 am

There's also the Pub in the Park event at Greenwich Park from Fri 18 to Sun 20. Lots of entertainment is promised with the opportunity to play chess and "try your luck against an expert player from Charlton Chess Club". Tickets are £18.75 each and food and drink is extra.

Anyone fancy a visit to Trafalgar Square followed by some drinks at the Bree Louise and some nosh at Drummond Street?

Who's the expert likely to be? Ian Snape?

And have you seen this?

"What colour square is that on the right hand side, do you suppose?" Assuming White is playing from right to left, h1 appears to be a white square.

But do you think White is playing right to left? The podiums maybe suggest so, but the general configuration of the pieces suggests otherwise. Odd.

Today's chess vibes report seems to confirm the board is indeed the wrong way around.