Nosher on the rampage

If you were in the tournament hall of the 7th Staunton Memorial at around 3:45pm yesterday you would have seen Nigel Short striding from the room punching the air as he went - and why not since he'd just ended the tournament with a rather perky looking +6 =4 -0 and a 2862 rating performance to go with the 2900+ one he notched up a couple of months ago in Malmo.

Marvelous stuff from Nosher who, as my friend and fellow blogger EJH recently pointed out over on the EC Forum, is proving to be a real inspiration for we chess players who would like to believe it is possible to significantly improve our results in our forties.

In other circumstances such a sharp rise in fortunes for a man of Short's relatively advanced years might have raised a few eyebrows. A few days ago, though, I happened to be in the gents when Nigel came in and I can exclusively reveal to readers of the S&BC blog that he did nothing more suspicious than take a wizz. No electronic lavatorial assisance for The Nosh.

Here's the conclusion to Short's last round game against van Wely ... 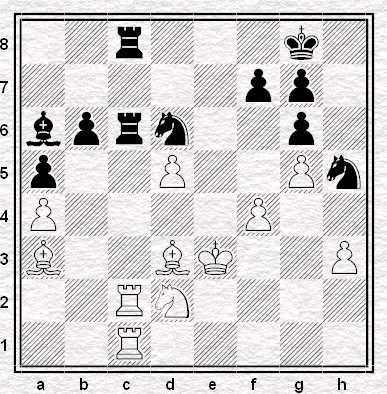 ... which I leave as a puzzle for the reader to solve.

However my favourite game of Short's from the tournament was his win in the 6th round against Jan Werle. Short avoided the Tartakower defence to the Queen's Gambit and although he's been doing that a fair bit recently it seemed to confuse the Dutchman a little. When I left the tournament hall at move 16 ... 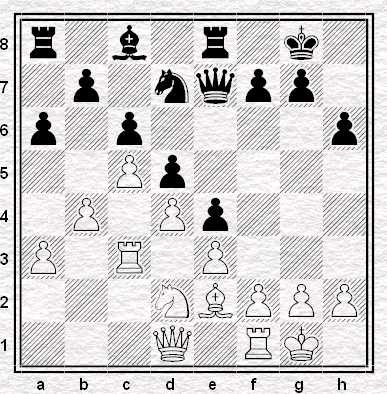 ... the position already looked good for Black to me. There's a lot of space for Nigel's pieces over on the kingside and my first glance assessment was that a direct attack against Werle's rather lonely looking monarch might be in order.

And that's pretty much now it turned out.

And while we're on congratulations ...

Andrew Stone informs me that S&BCC London League top board Venkat scored an IM norm at the recent Uxbridge International tournament. A quick trip to the tourney website tells me he managed to secure this result with a round to spare! Well done him.
Posted by Jonathan B at 7:15 am

A "case" of bad grammar?

Pithy writing, and interesting as ever, but between you and me (sic) this provoked a wince:

"a real inspiration for we chess players".

Stay in after school and write out one hundred times "for us chess players".

I'm thrashing my bottom red with my left hand as I type this with my right!

May I plead a zeitnot blunder? I had less time than I would have liked to produce today's post.

I'm sure Alekhine would have had something to say about that sort of excuse though.