Chess in Art Postscript : Staring into the Abyss

Guest post by Martin Smith
The Orient! King of Games, Game of Kings! Renaissance! Entertainment! Eroticism! The Abyss! Mate! The Moment of Duchamp! Geometries! Art is the Game!

These are the evocative chapter headings of Yves Marek's book "Art, échecs et mat" (note 1) and they add up to proof that as a genre, art based on chess, with its subject's chequered history, chameleon social role, and resonant gaminess, has a richness that knocks most others into a cocked hat.

Take the "Abyss" sub-genre, and explore a small niche therein: the one-up Abyss picture. It has a simple visual formula: board (or part thereof) + pieces (a decent selection) + one player (top whack). The theme, the text, the message in these vignettes is that the implacable opponent of the lone player is the monstrous infinity of chess itself. You can't beat it!

We had a faint, surrealist inflected, foretaste with Foster's Chess Player (Chess in Art VII) but this shows us the real deal: 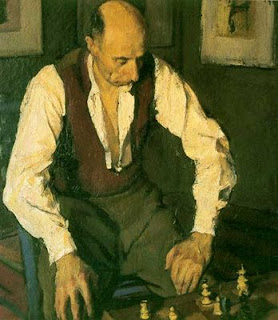 Man playing chess c.1948
Corneliu Baba (1906-1997)
Baba's player is of humble peasant stock (look at those hands) and at rest from the daily grind he phlegmatically applies himself to his toil at the board. He sits like a Buddha in a ten-foot cell (note 2). A Cezanne influence is clear; the figure has the structure and substance that he wrought in his ground-breaking portraits, still lives and landscapes. Like Mont Sainte-Victoire, Cezanne's favourite picnic spot, the solitary presence dominates the image.

With no human opponent on show what can the poor wretch do but gaze, transfixed, at the board, and peer beyond its brittle surface into the bottomless pit of possibilities. His head spins as vertigo's grip tightens and he mouths a silent scream into the maw of the unknowable gaping before him: the inaudible in pursuit of the ineffable. He stares into the Abyss.

It doesn't help to be a retired bank manager (note3) for the Abyss pays scant regard to social rank or distinction. 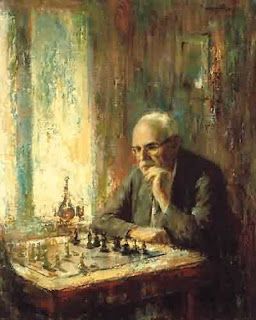 Concentration (no date)
Richard Earl Thompson (1914-1991)
The artist has captured the passage of time, infused with melancholic nostalgia, in this atmospheric study of ageing. Engrossed in his move for so long he hasn't noticed the years slip by. He is drained of colour and life by the ebbing light and, as they did on Miss Havisham, the cobwebs will settle as his time runs out. He is lost, there is no way back, and in the Abyss no one can hear you think.

Effecting a casual nonchalance won't work either, nicely caught in this next quirky, droll, almost caricature piece, with the player's ungainly angular limbs set off against the unperspectived board. 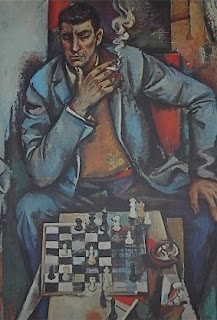 Willi Neubert (b.1920)
Schachspieler 1964
Archness expressed by a raised eyebrow may intimidate a human opponent, but when it is one-on-one-who-isn't-there, and you confront the Abyss alone, trying to pass as Jean-Paul Belmondo will likely result in an anxiety attack and shortness of breath, which those French ciggies will just make worse.

To be fair not all player+board+pieces pictures are doom-laden as those above, especially if youth or femininity is involved. 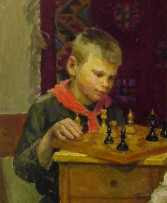 Grigori I Tseitlin (b.1911)
Playing Chess 1949
This Young Pioneer is a picture of innocence. He can just reach the pieces, his sense of wonder burns brightly, and he faces the future with confidence, as Socialist Realism has taught him, together with an unshakeable conviction in the ultimate triumph of the Soviet School of Chess. But time is on his side, he may not fall into the Abyss; he may end up doing judo like Mr. Putin.

Women seem also to float above the Abysmal gothic horror. 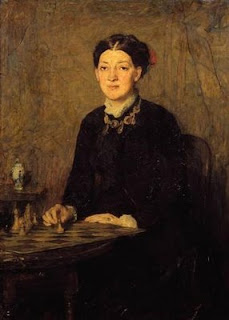 Mrs Charles Moxton c.1875
William Quiller Orchardson (1832-1910)
(Tate Gallery)
Mrs M. hasn't the faintest idea what to do with the pieces (she would regard this as a compliment) except to get the maid to tidy them away after the sitting. In this gracious study of a Victorian lady with chess set, tea and cucumber sandwiches would do just as well. Abyss won't immediately be on her mind, but should it occur, she may have to do battle with that ghastly new-fangled water-closet. 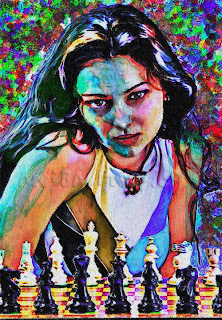 Alexandra Kosteniuk 2008
Anibal Lopez Lenci b.1966
For contrast, here is a woman in full dragon-slaying mode. Alexandra is no sheep in she-wolf's clothing, but is hard to the core. She looks with steely determination; there is no softening of the features, such as the mouth, even though, in this image, there is no chance of encountering the crack of doom. Perhaps a bottomless chasm might provoke some kind of reaction, and then Abyss would be good as a smile.

Formally speaking, the portrait relies heavily on a photograph (that's how they do it these days) the colour is not naturalistic (thank the Fauves for that) and the background is rather busy (a kind of aura, or force-field). In its way it is all very effective, and the gaze stops you, standing in for her opponent, dead in your tracks.

If looks could kill then Alexandra is guilty of first degree murder, so maybe she has a better home in the "Mate" chapter in Marek's book which analyses Death! Regicide! Faust! Perhaps we might tip-toe through that theme another time.

1. Yves Marek, Art, Echécs et Mat. (Imprimerie nationale, Paris, 2008.) New French book exploring various aspects of chess in art. The exclamation marks are not his, and he bears no responsibility for what follows.

2. While Rubin sits like Buddha in a ten-foot cell/ An innocent man in a living hell. / That's the story of the Hurricane... Bob Dylan and Jacques Levy (1975).

The Baba discovery comes from Art Inconnu: Chess. Thanks to the James Bros for providing the lead to it.

3. Especially one with an uncanny resemblance, I fear, to my doppelganger 15 years hence. Though I have never been a bank manager.
Posted by ejh at 9:45 am

"Engrossed in his move for so long he hasn't noticed the years slip by." ---- why we should always play with a clock, perhaps!

Just imagine if it was you and the game was a Berlin Tom!


Martin, I wish I had the time to read your post but dissertation calls. Will get to it in the week.

Tom, in the Abyss one is in perpetual time trouble; but the flag only falls once, though you never when you quite expect it...a bit like doing a dissertation, then, eh Jonathan...and, the Berlin as the Abyss; now, there's an image to conjure with.

The picture of Alexandra is quite striking. The colors make her seem like "super woman" If she looked like that in real life it would be totally scary to play her.

Polly,
Isn't it reminiscent of a famous image of Bobby Fischer staring out across a full chess set, straight at the viewer? So famous I can't find it anywhere on the Web. Maybe I dreamt it. Can you, or anyone else, help locate it, please (unless I really dreamt it, of course).

Presumably you're not thinking of this

Yes, thanks, that's a good one, and close to what I had in mind. But he's not quite making full eye contact as Alexandra is. But the shoulder push is interesting - imitation...flattery..and all that.

It was taken by Phillipe Halsman in 1967; full face and no shoulder budge. But I misremembered because here Bobby isn't staring us in the face either. He is looking slightly off line at a chess piece.

However I have to confess that, in fact, it was staring me in the face all the time; being reproduced on page 91 of Marek's book. Oops. Sorry.

Now as I recall, somewhere there was also a staring pic of the young Tal, though at his opponent...but definitely not in Marek.

And to the Tal photo mentioned above.