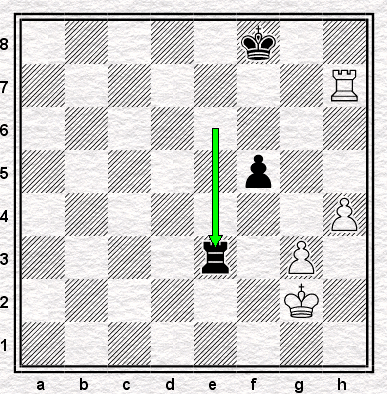 The time control had been and gone and I was following this and a few other endings with the help - or otherwise - of a computer progam that was most surprised when Salimbeni responded to 54.Kf2? [54.Rh5! +-] with 54...f4! which gives up a pawn but in return secures what ought to be a drawn position, something of which you can assure yourself - as after the capture we're down to only six pieces on the board - by entering the positions in the Nalimov database.

Salimbeni actually went on to lose the game, having the draw in hand until his very last move. (For reasons which were evidently clearer to both players and Nalimov than to the present writer, Black is lost in the final position. He could apparently have saved himself by playing his rook to any of a2, b2 or c2 instead of f2.) Of course it's a little bit easier to save such endings with access to books or databases than it is without them, but it's a matter of some curiosity that computer programs, stuffed as they are with opening information, don't seem aware of equally crucial information in the ending.

The concept of "not making any progress" is a hard one for a computer program to be made to grasp. There is a related problem with the concept of the blockade and for a better-informed discussion of the issues involved I'd refer people to Robin Smith's Modern Chess Analysis which largely deserves the reviews it received on publication five years ago. For the moment I'll just observe that anybody who believes that to find the best moves, one merely has to turn on the computer, needs to explain why it can neither find nor understand Salimbeni's 54...f4.

"Computers can't play endings" isn't entirely true, of course but I was interested that it was a rook ending which the computers failed to get to grips with, having written last year about a game in which computers were similarly unhelpful. In fact it wasn't just, as mentioned in the piece, that they cannot find the winning line, but that they do seriously strange stuff - like recommending variations that lead to positions such as this 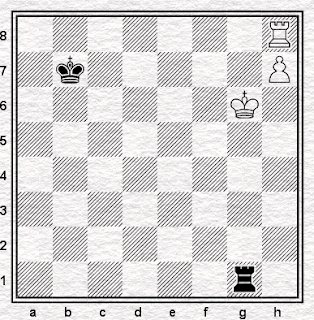 which is evaluated at about 4.50 by the computer and about 0.00 by the well-informed human mind.

So it's not just that they can't find wins, but that the wins they think they find often aren't wins at all - and whoever follows their evaluations is liable to find, down the road, that the sort of position that the computer was aiming for, evaluated as an easy win, is in fact a stone cold draw.

Take this, for example, which cropped up in a corrspondence game, concluded earlier this week, between IECG International Master Alfredo Dutra of Brazil, and the present writer. White has just played 42.b6 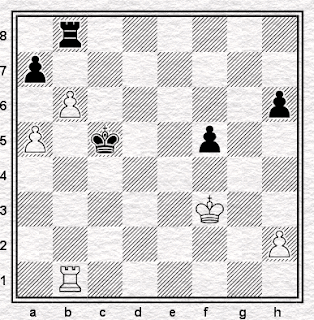 and the computer thinks that Black is in desperate trouble, since after the natural 42...axb6 43.axb6 Rxb6 44.Rxb6 it evaluates the position as 3.48 in White's favour - and even after the recapture 44...Kxb6 thinks White is ahead to the tune of 3.14 until it reaches a depth of no fewer than 28-ply. Even then it revises its assessment not to 0.00 but to 1.22 - which you would still think was probably enough to win. Unless you actually looked at the position.

Now I've no reason to assume that my opponent blindly followed the computer, since as far as I was concerned the position was drawn anyway from some moves previously. (He may, indeed, have been hoping that I would be misled by the computer into not selecting the drawing line.) But it's clear to me that the computer's massive misevaluation would, if I had followed it, have caused me to lose the game - since in the position after White's 39.a5 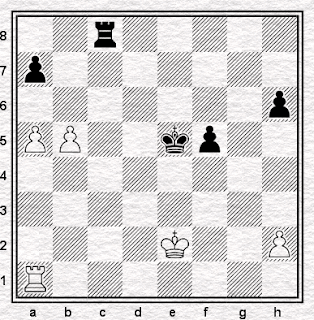 it's necessary not just to ignore what the computer thinks best (the king going to the fourth rank) but to go down the line that the computer thinks loses. Moreover you can't just wait for the point where the computer gets it very badly wrong (with its +3 evaluation) and then diverge, because if you do, you'll never get there in the first place. You'll have been put off by a bad evaluation (worse than 1.00) on general principle - and have chosen another line, with a better evaluation but which turns out to lose.

In fact Black probably needed to see, for himself, the route to a draw at least before playing 36...e5 (if not before) since after that, although there is a draw, it takes a succession of only moves to get it.

I got it. The computer would have settled for a loss.

18. Bxf6 seems rather a strange move to my (incompetent chessplayer) eyes.

Anybody able to offer an explanation of why it's a good idea?

File under, 'There Is Still Hope'!