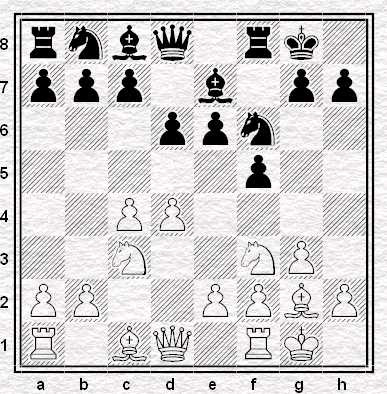 This Saturday Simon Williams, occasional visitor to these parts, will face Victor Korchnoi with the Black pieces in the eighth round of the 7th Staunton Memorial tournament.

Imagine you're the Ginger GM. Are you going to take the chance to play the Classical Dutch against a legend? It is, after all, the opening with which you made your name and the one you've used to hack to pieces opponents of all strengths for many a year ... but also, if truth be told, an opening you don't play so much anymore because frankly it's a bit ropey.

So, Classical Dutch to answer's Korchnoi's 1. d4 or something else?

The choice is yours. 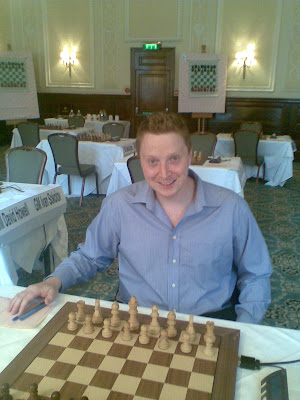 S&BC Blog stalkee Simon Williams
Go on Simon, you know you want to

You run a chess tournament. Your name is Raymondo. It's Tuesday and you're sitting in the tournament hall a few feet away from the tables. Your phone is on silent but you can feel it vibrating in your pocket ... Do you take the call?

Well, if you're the real Ray you do. EJH wondered whether it might have been Chessville wanting a word.

PREVIOUSLY:
BORP? III - which side of the board do you want to take?
BORP? II - opposite coloured bishop ending?
BORP? I - rook ending?

It's hard to say. It depends on how confident Simon feels about the Dutch these days. When did he last play it? My instinct is that he will not play it against Korchnoi.

As it happens, VK's record against the Dutch is not great. 58% from only 12 games against GM opposition. With 1.d4 generally he scores 60% from a whole lot more games against GMs.

I asked Simon to punt the dutch against Victor and he laughed and said he "might" depending on how many points he had at the time.

Well the Dutch must be very bad for Black if, as in your diagram, he has to do without his white squared bishop! :-) That piece is pretty useless in the classical Dutch anyway!

Jonathan B - Simon's playing Victor on Sunday not Saturday as Saturday is a rest day for the all-play-all section.

Thanks Phil ... I've improved Black's prospects in the diagram a little bit now.

And thanks anonymous - you just saved me a fruitless trip to The Strand. Another extra day for Williams to brush up on his Dutch repertoire. Good news.

Korchnoi did face a Dutch today - but the Leningrad variety.

Jon B - glad to be of help about avoiding the few empty tables tomorrow for the all-play-all.

I see what you mean about Sokolov -turning up 15 mins late then straight to the coffee/tea area. Indeed, I noticed you looked at your watch to see exactly what time it was once Sokolov brushed past you. Then I did the same - I made it 14.45.

The same goes for Wells and Howell, I've seen them both arrive about 5 mins late every time I am present at the start of play. Irritating isn't it? Especially when I think their hotel is opposite the venue (?)

Other obversations - I couldn't believe it when a guy next to me got out a pair of binoculars! You may laugh but the demo boards were so far away I considered asking to borrow the binoculars. I'd stay at home with my feet up watching it live but nothing beats being there, including the false mingling amongst the GM's on display in the bar area when it came to the post-mortems.

Also I was disappointed that Gawain gained a dress sense since his last appearance in 2007 with his trousers a few inches too short replaced by trendy clothes and a few pounds shed to go with it. Must the following his gf around the venue every move that helped.

Are you who I think you are (Madame K)?

anyway, yes it's interesting the order of arrival seems set every round...

Sokky being 15 minutes late is positively early for him. Usually it's 20 or 17 at his most punctual.

I note, however, that he's added a new element to his routine. Now he first goes to get a glass of water, then goes to the coffee table and then, finally, plays some chess. Perhaps that's why he needs the extra time?

I'm not sure if I find this annoying - a bit strange for professionals perhaps but not annoying. Sokolov on the other hand I find positively funny. How he can piss 20 minutes away every game and still be one of the highest rated players in the world is beyond me.

PS:
yes the demo boards are a long way away. I've heard loads of people making this point - from the ordinary punter to the titled visitor to those who've had senior roles in the British chess establishment.

Too far away and too small.