Rest day down in Torquay, and we reach the half-way point of the tournament with Howell and Jones at the top of the tree unbeaten on 5/6. A pack of GMs - Gormally, Jones, Hebden, Wells, Trent(IM) and Williams - is in hot pursuit just half a point behind so it's shaping up for an interesting run in.

I'm afraid the S&BC favourites idea has turned out to be a bit of a kiss of death with probably only Williams happy with his results so far. I would imagine both Keith Arkell (3.5/6) and Jack Rudd (3/6) would have hoped to have reached the end of the first week a half or even a full point better off. 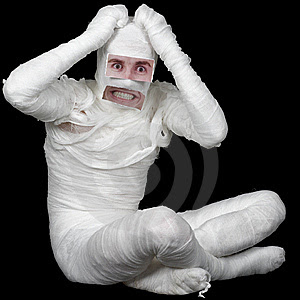 Angus French: out of action since Tuesday

Of those with S&BCC connections Michael White has reached 50% in the championship and James McDonnell, one of the lowest rated players in the event, has now notched up his first win. Chandler's Corner suggest James might also have secured a draw in an earlier round but lost after turning down a repetition.

Elsewhere Chris Jones finished the 5 day morning tournament 5th= while Dave Ledger leads the major open outright with 5.5/6 with brother Steve a little further back on 2.5. Angus 'sick note' French has three points after an interesting tournament consisting of two wins, two half-point byes and two defaults. I'm pleased to report that the S&BCC President is on the mend and he hopes to return to the fray tomorrow morning.


A rest day for many then, but one bunch who won't be getting the day off today will be the folk taking part in the annual cricket match - this year against the Miss Marple-esque Clyde Saint Mary. I don't know how long this tradition of a chess players v local cricketers has been going but it certainly seemed well established when I went to Plymouth twenty years ago.

Talking of cricket, here's a photograph of Michael Hussey getting bowled by Onions in the third test at Edgbaston. 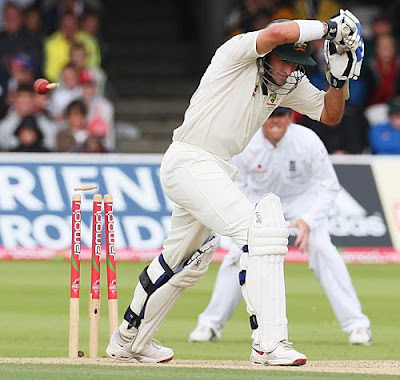 I include it not for my own gratuitous amusement (although this link to a video of the start of the second day is here for precisely that reason) but to make a point. In offering no shot, Hussey got himself out in a way that no ordinary club player ever would. As it happens also on Friday, if much later on, David Howell and Lawrence Trent reached this position. 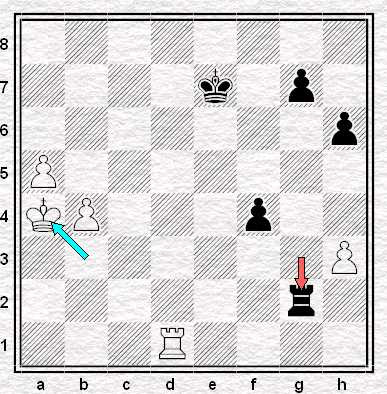 I'm fairly sure the vast majority of club players would play a5-a6 without much of a thought but in fact the game continued 38. Kb3 Rg3+, 39. Kb2 Rg2+, 40. Ka3+ Rg3+, 41. Ka4 Rg2 returning to the diagram position albeit with the important difference that the time control has now been passed.

Howell now settled down for a big think, 10 to 20 if my computer screen was to be believed, and then did actually push his a-pawn forward, Trent eventually resigning a dozen moves later (see here).

Strange that a GM would take so long to find a move that an average player would get instantly - but I suppose if you're contesting the British Championship you have to be a little more careful than if you play the game in the lower reaches of the Surrey League. More importantly GMs are that much more aware of the dangers of their opponents passed pawns and the value precision in rook endgames.

A case of ignorance being the blissful state of the average player I think. Or maybe it's just that after reaching the time control Howell went for a pee and found a long queue at the gents.

There's another issue, generally applicable to Fischer clocks. Although I have in fact been known to repeat moves to gain time on the clock, I usually find that by the time I've actually worked out for sure that it's a definite repetition, I've used more time than I was trying to save!

I almost didn't recognize Angus under that lot.
Get well soon, Angus!

Anybody know how the chessers got on at the cricket then?