Guest post by Martin Smith
Most chess clubs are rather subdued introverted places dedicated to the pursuit of our favourite, if not-yet-popular-enough, game. In nineteenth century Italy they may have thought that comely serving wenches would broaden its appeal. 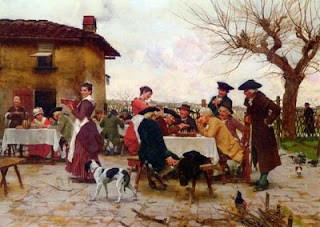 La Partita a Scacchi (1886)
Raffaello Sorbi (1844-1931)
from Chess in Art XX
Come on down and get a rollicking good game, even if the rest of the company is distracted by feasting, carousing, and other ribald diversions. That's the message from Sorbi's rumbustious extravert image. You might be in Italy, but there's little chance of a quiet game here.

Although you can't see the position on the board, it is obvious that a tame draw by repetition is not on the cards. Yes. Draw by repetition: the artistic credo of Signor Sorbi, whose pencil, followed by his brush, recycled the scene several years later, albeit in a mirror image, sort of. 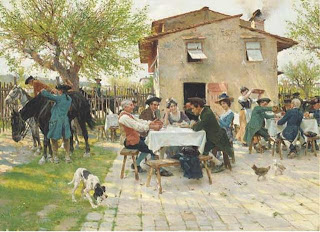 A Sunlit Osteria (1913)
Raffaello Sorbi (1844-1931)
It is spring at last, and the willow, now on the left, has burst into leaf. A brace of horsemen appear to have stopped by, and enjoy the last glimmer of the low evening sun. This is a rather daring innovation and Signor Sorbi must have been pleased with himself. Carried away he airbrushes the game of chess.

If the artist has second thoughts it would be no trouble to pop it back in, and our rather forward friend could play his move without so much as j'adoube. The simple God-fearing fellows would continue their debate; "White pawn to queen's knight fourth in the Italian Game, on move four!?" "Mamma Mia, for an 'acker it is manna from the 'eavens"...and so on.

Sorbi's 1913 version, minus board, shows the length, the extraordinary length, to which an artist will go to portray people in blatant and unabashed acts of not playing chess. And he isn't the only culprit. Here is another comedy of manners where chess is beside the point, and off the pace: 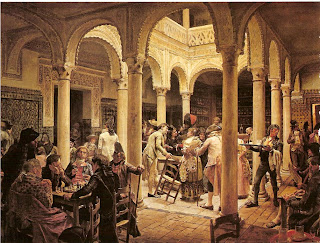 El Café (1889)
José Jiménez Aranda (1837-1903)
For the most part it's a lively scene. A gentleman gallantly offers a chair (blink, and it's done); an order catches the waiter's eye (quick, or he's gone); and to the left a fellow nods his head in a passing encounter (bows, and moves on). Meanwhile, the chess party, unnoticed and oblivious, play their interminable game. The artist may have put them in his picture, but at the same time he contrives to put them beyond the pale.

Not that you have to be in a crowd to not play chess, or be ignored playing it. 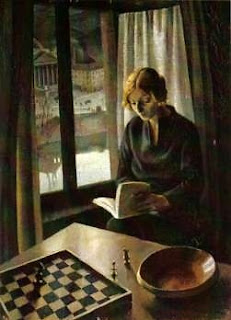 Interno (1921)
Gigi Chessa (1899-1935)
In Chessa's atmospheric and contemplative study he shows that chess can also not be played in the privacy of one's own home. She has buried her nose in her book, and the reduced position on the board might suggest that she is absorbed in an obscure endgame treatise, but more likely some racy potboiler from the burgeoning genre of probablygotnothingtodowithchesslit .

Some pictures look both modern and old at the same time, and Chessa's has the clean cut and strong design of a something contemporary, with mood music from the neutral art deco colouring. But the intimate interiority, and play with space and light, calls Vermeer to mind.

Matisse doesn't look back. He is the master of languor, of not doing much, of not playing chess. 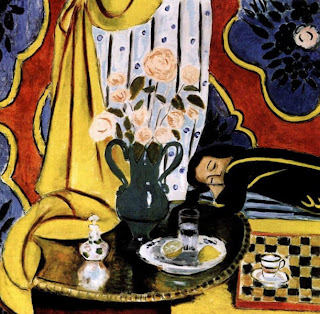 Femme à côté d'un échiquer (1928)
Henri Matisse (1869-1954)
There is an outrageous asymmetry in the composition, with the high-keyed roses dead centre, and all the action, or lack of it, to the right, reinforced by the yellow/black contrast. The heavy swag tries to balance the design, but one's eye is drawn irresistibly to the sleeping beauty. She has surrendered to the rich and sumptuous décor, heavy with the scent of musk. She does not play the game, but dreams of using the board as a drinks tray.

If you comb the Chess in Art Resources you'll find rather too many artists not painting people engaged in the mentally challenging, spiritually uplifting, socially useful and environmentally friendly activity of the royal game. To murder Marcel Duchamp's famous line: while all chess players are artists, not all artists paint chess players.

And having that read, I'm off to not play chess...