Good things come to those who wait 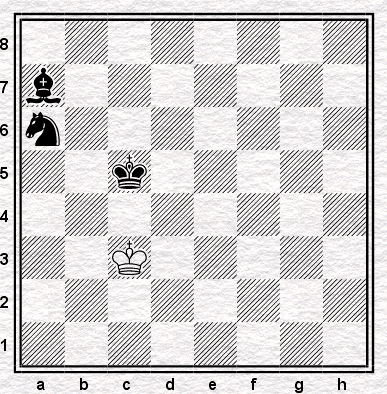 I played the longest game of my life on Sunday evening. 125 moves and we were on our third scoresheets before we were done. I'm pretty sure if not been beyond move eighty before. It was, as well, the first time in my life I had the chance to mate with bishop and knight against king.

I've occasionally bored people before by saying that I was taught this ending by Nigel Povah in a Hertfordshire Juniors training session in either 1982 or 1983. In actual play I've only ever been on the receiving end of it before, at a congress in St Albans in 1994. I think both players were both down to our last five minutes, scoresheets therefore being abandoned, and I can certainly remember calling over the arbiter, the late Glynne Jones, to keep an eye on the move count. Mate came well within the fifty. (I believe the opponent was one Roger Lamont.)

I must have taken a little more time than that. I played 36 moves after the final capture: as I began the sequence with just a minute or two left, finished it with six to my credit and had thirty seconds' increment each move, it's not too hard to calculate that I must have used a little less than a quarter of an hour. Most of it, I should imagine, in the first part of the process, driving the king to the wrong corner. (I actually relaxed a little after capturing the final pawn, almost forgetting that the clock was still running. That would have been a desperate tragedy even by my standards.) Just as well, too. There was just a moment or two where I was unsure, where the king didn't go the way I expected it and I was glad of the time to think.

My opponent resigned, having waited to see if I might stalemate her, two moves before mate. Twenty-six years, or maybe twenty-seven I've waited to do that. Thirty-six moves, plus the two more it would have taken to deliver mate: it would have taken me thirty-eight in total from the starting position. Nalimov reckons it can be done in twenty-eight. Can you do better?

I mean, of course, better than my thirty-eight. If anybody reading thinks they can do better than Nalimov...

It seems there was a B+N mate in the recent Grand Prix tournament too.

FWIW, I had the opportunity to go into a K+B+N vs. K ending a few weeks ago, at the Major Open in Torquay, but declined to do so. Both I and my opponent also had a rook each and these could have been swapped. Instead, I thought it would be easier to play with rooks on and I ended up mating in 27 moves.

That's inspired me to learn the Bishop and Knight mate. I still haven't got round to it - hoping it never comes up.

Revisiting this post, it strikes me as rather a shame that White didn't allow Black to deliver mate. It would only take a second or two and it feels like a much more pleasing way to end the game.