Knights on the rim

Today I'm taking some time off from the Staunton Memorial to catch up with Vassily Ivanchuk's adventures at the recent Jermuk Grand Prix.

EJH brought Chucky's game against Alekseev to my attention a couple of days after it was played although the internet being what it is I had already heard of it from a thread over at www.chesspub.com.

After twenty moves the game had reached this position ... 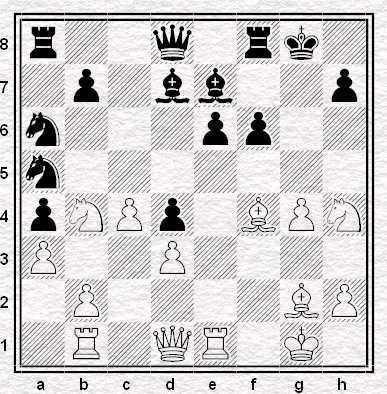 The GMs weren't paying too much attention to that stuff about knights on the rim. In fact it would seem that the steed on b4 was so embarrassed about being the only one of the quartet not to be loafing around on the edge that it immediately committed suicide.

I looked at the diagram for a few minutes trying to work out who was better. I figured out white was, that the two white bishops were more likely to cause the black king problems than vice versa. It didn't get me anywhere near Nd5 though!