[Following Benasque and the British Championship we're going to keep our post-a-day schedule going for at least a couple more weeks. Today marks the start of our coverage of the Staunton memorial] 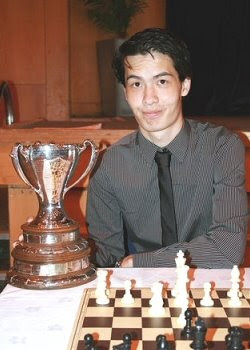 If you're going to get a few perks as British Champion I suppose being able to turn up for the opening round of a chess tournament more or less when you feel like it is going to be up there amongst the best of them.

Yes, David Howell is already playing in his first tournament as our National Champion - the 7th Staunton Memorial which started yesterday at 2:30 yesterday afternoon, or 3:30 ish if you're Howell. To be fair to him I imagine he's been a bit busy since drawing with Gary Lane early on Friday evening. 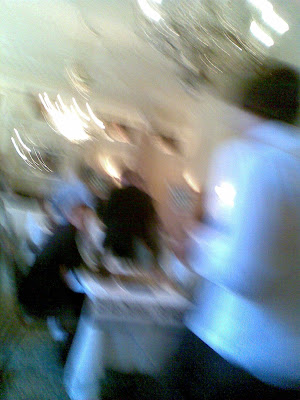 Attempting to snap a legend ... but The Corporal marches past at the critical moment

I have to say this year's Staunton has the potential to be a truly great event. Even the 'B' tournament, a ten player all-play-all, would be considered pretty tasty by most standards. Best of all, Victor Korchnoi's playing in it. Victor bloody Korchnoi! There. At a chess table. A few feet in front of me. Too good to be true surely?

Talking of Old Vic, I thought the following was rather a poor effort from the tournament brochure ...

(Other than the title being underlined in the original, what follows is exactly what is printed.)

"A Legend of the Chessboard.

A warm welcome to Victor Korchnoi playing in the Staunton Tournament for the first time. Victor Korchnoi is a Chess giant of the 20th century born 23rd March 1931 in Leningrad Russia, at the grand age of 78 he is currently the oldest Grandmaster still playing on the world Circuit.

Korchnoi graduated from university in Russia with a major in history, Victor started learning chess from his father at about the age of seven, in 1943 he joined the chess club at the Leningrad Pioneer Palace.

In 1951 he got the Soviet Master Title, 1954 saw him achieve International Master, Korchnoi was promoted to Grandmaster in 1956.

Korchnoi is best known for his matches played against Karpov for the World Championship in 1974, 78 & 81, our Chairman Raymond Keene OBE was one of Korchnoi's second's in 78 match along with Michael Stean.

In 1976 Korchnoi defected from Russia after the Amsterdam tournament now living in Switzerland, in 1977 Korchnoi wrote his Autobiography Chess is my Life with having a long chess career he updated it under the same title in 2005."

We'll overlook any factural inaccuracy and the delicate airbrushing of Raymondo's role as Korchnoi's second back in Baguio for now. What I want to know is - and people who live in glass houses shouldn't throw stones but I'm going to ask this anyway - do adults really write like that? I mean really?

It won't do. Not if you want to "... have the UK’s top chess tournament as a top media event" (from the tournament website) anyway.

Hey ho. Korchnoi lost his opening game against Cherniaev so presumably he's got more important things to be cross about. Let's hope he has better luck this afternoon against IM Lawrence Trent. 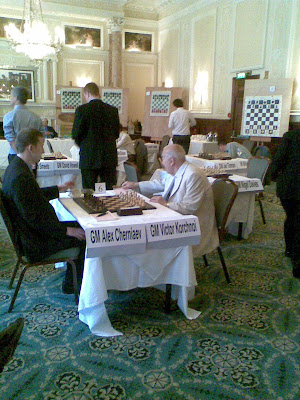 That's better ... but he was looking away.
I'm going to get a decent shot of Korchnoi before the tournament is over if it kills me 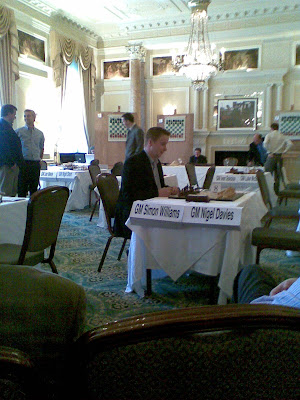 Simon Williams - S&BC Blog favourite and British Championship runner-up.
The campaign to get him to play a Classical Dutch against Korchnoi starts here

Bonus item for making it all the way to the end of today's post ...

Top stuff. Thanks to Neil Graham over at the EC Forum for the spot.
Posted by Jonathan B at 9:31 am

Can I ask why Mr Howell is dressed for a funeral?

It's not the reason. The reason is money.

The window for the Staunton is limited due to sponsors requirements and availability of venue I believe.

As much as I enjoyed the British Championship there is no comparison in the strength of that event and what is going on in the Strand right now.

I'd like Adams and Short to play in the British too ... but doubt they're going to at any point in the near future.

New English No1 next list?? The man with the guitar is on a hot streak!

Gawd, don't. He'll start boasting about how he's caused Adams to have a breakdown or something.