We are not amused II

Guest post by Martin Smith
Thanks to ALCHEssMIST, via Tom Chivers, here is another larger than life, and seemingly twice as real, chess sculpture to savour. This pair look like they could move at any moment – on the board and away from it. 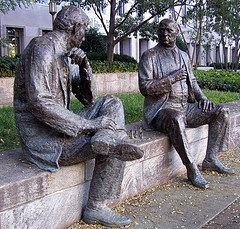 The Chess Players
Lloyd Lillie (1983)
John Marshall Park, Pennsylvania Avenue, Washington, DC
Enjoy the near symmetry of the arms, the contrasting disposition of the legs, the sympathetic sway of the bodies, how each figure is given character by the configuration of its limbs (the young man drawn together, pensive; the older man open, expressive).

The sculpture shows the civilising aspect of chess, cementing common interests, mutual respect and affection across the generations (the models are in fact grandfather and grandson). But this is not without tension between the self-justificatory claims of experience, and the untested optimism of youth. This is hinted at in the "we are maybe just a little bit not amused" expression of the older man. Indeed he looks, and is, literally, taken a bit aback. 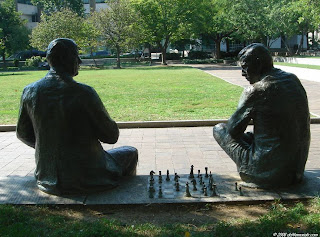 Taken aback view
This must be because of what is happening on the board. 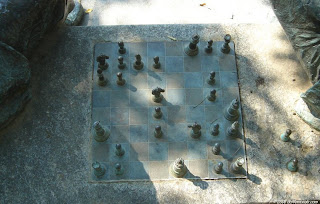 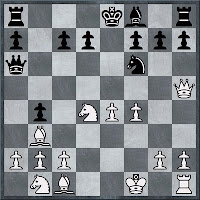 ALCHEssMIST view
White: Grandpa
Black: Grandson
If ALCHEssMIST's rendering of the position is correct, and it looks it, then the senior partner is in check and his queen en prise, so either Qe2 or Qb5 is forced, and either way there is still a lot to play for, though given the balance of forces we'd probably prefer White's N&B over the R.

But there's something a bit odd. Where is White's QR? It couldn't have moved, and it's unlikely that it was captured, so unless it has been removed as a souvenir, then it was never there. White must have given rook odds, and to get back to rough material equality Black must have lost, blundered or sacrificed a couple of minor pieces. Pretty duff play by the junior partner, and no wonder the old boy is displaying the booty like it's his birthday. 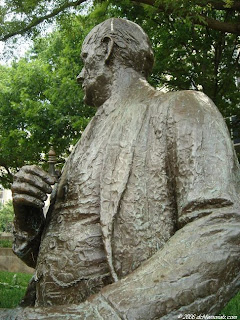 Even more so when you ask, if Black has just given check, allowing the Queen exchange, why didn't he just play 1...Nxh5 last move with an easy win? Even if the BQ was en prise (plausibly on e6 or c6) before moving away to a6 he could still have won a piece without the check. Not just birthday, but Christmas as well for Grandpa.

So he was not amused: by his youthful opponent's dismal play I'd guess. But it's a touch self-congratulatory. If you give rook odds it's not too clever to blunder additional material yourself, even if your opponent misses it.

If the sculpture is about the eternal youth versus experience dialectic, then this time around, with this demonstration of imperfect judgement by both parties, it is honours humanly even.

Photos by kimberlyfaye: Creative Commons
Posted by ejh at 11:20 am

Excellent thought provoking post Martin and thanks very much for the hat tip.

Hey Morgan, great reference - it's good to see the Queen decapitated, but not with her top off.