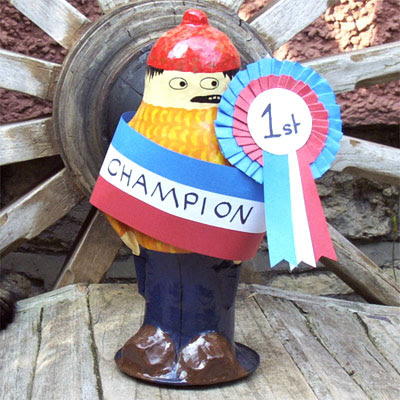 The only surprise was that securing the half-point he needed took about two and a half hours instead of the thirty minutes max that I'd expected, but David Howell wakes up this morning as the new British Champion.

Howell finished up on 9/11, only half a point clear of his nearest challengers although his victory seemed much more comprehensive than that. For the record Mark Hebden and Simon Williams finished second equal on 8.5/11, Richard Palliser fourth with 8/11 and Stuart Conquest and Danny Gormally tied for fifth with 7.5/11.

You can find a full review of the tournament on official website but for a final report on the S&BC Blog favourites I can tell you that Jack Rudd finished 7th-14th with 7/11, including five wins in his last seven games and Keith Arkell finished a little further back with 6/11. By his standards it was a very ordinary tournament for Keith although his defeat of Eggleston in round ten was one of my favourite games of the entire event and will definitely be featured here before the month is out.

But enough of such matters. For the rest of today let's focus on Howell.

About to play the Ruy Lopez Exchange ... and who can blame him
photo from the official tournament website

Last Tuesday I wrote of the difficult pairings Howell had been getting. One measure of the extreme toughness of his tournament was that not only did he play all of his nearest rivals - when was the last time that the British Champion had to have a two-point downfloat in the last round? - but he got the Black pieces against four of the five who finished immediately behind him. Howell's other game with Black, by the way, was against, Gawain 'Corporal' Jones who was neck-and-neck with Howell up until the eighth round when he rather fell away.

Five Black games against GM opposition with an average elo of 2522 ... and still Howell managed to score +2. That my friends is a deserving British Champion! Talking of which, two weeks ago I outlined my criteria for what I thought would make a truly deserving Champion. Howell fulfilled them all. He played the strongest opposition possible, he beat most of his nearest rivals, and he led from the start. He did all that and more, not even conceding any short draws, not even in the last round. 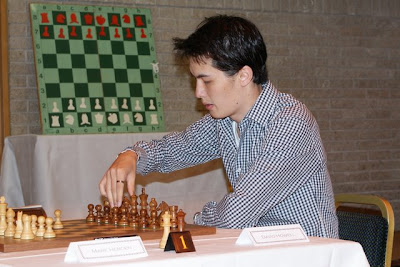 To finish today, let's have a look at a few of Howell's Black magic highlights. To start with there's what may well be my favourite move, his or anybody else's, of the tournament. 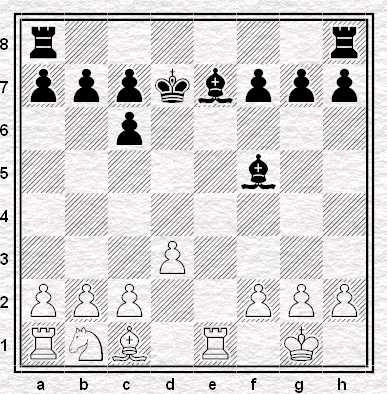 connects the rooks and leaves Black with the bishop pair and a position looking very much like an Interesting French Exchange. Who could ask for more?

Somewhat messier was Williams - Howell in round 8, the sort of game I like to watch but would want to resign from both sides if I ever had to play it myself ...

which brings us to the decisive game in round 10 against last year's champion Stuart Conquest.

It's amusing to see very strong GMs play as if they've never heard anything about the principles of opening play in their lives. After three hours they'd reached this position, 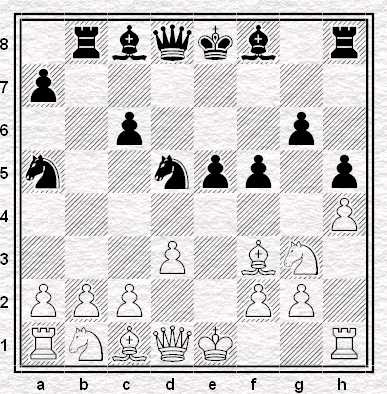 Black's position looks like Howell's had a sniff of the special salts with which Mike Surtees likes to refresh himself prior to games while White's looks like Conquest has chosen to make a move every second rather than each time it was his go.

Great stuff and the whole thing, two massive times scrambles and all, can be found below.

PS:
Champion's photo from www.papiermache.co.uk/
Posted by Jonathan B at 7:03 am

The pivotal moment of the whole Championship, though, was Hebden putting his rook on the wrong square when completely winning in round two.