Art, craft, and design: these teasing, shape-shifting categories were seen in Chess in Art XI in the industrial scale marquetry of Alan Boileau. They were at work, too, in Jaime Hayón's giant chess set installed in Trafalgar Square for a week in September. Jonathan B's Battle of Trafalgar, and part II, reported on it at the time, and here's a postscript on it from the Chess in Art point of view.

First off, who, or maybe what, is Jaime Hayón, Spanish Wunderkind, "Londoner born in Madrid" in 1974: artist, designer or craftsman? 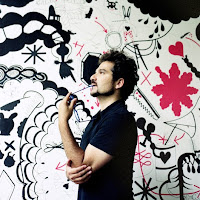 His creations run from small toys, via shoes and furniture, to stylish restaurants and large scale fantasy aircraft, all realised in refined synthetic materials ( glass, plastic, ceramic) and drawing inspiration from retro, deco, rococo, techno, baroque, and roll. His is not a mimsey-tinged world of wicker baskets, lace doilies, and hand-painted eggs (though they have their place, though elsewhere); it is fast-lane, high spec., Starck-staring, post-modern playfulness and flamboyance. Not "street-wise", though - he is no Banksy guerrilla artist: "salon-savvy" or "couture-conscious" is more to the point. Like all the most successful design work, you want to do more than merely look. You want to, have to, touch it, use it, get in it, off on it and, even if it's not a chess set, play with it. Irresistible. 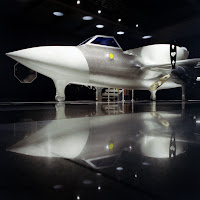 Not a painted egg.

Many of his creations are for the interior, but the ten foot chess set was for the big outdoors – not the boutique, but the Square. It is made in Baso ceramic, on a board of Bisazza glass; with upholstered cocoons as thrones; and lighting towers that, as Jonathan B observed, turn the playing arena into a boxing ring; all overlooked by Nelson, lions, plinths, porticos and milling spectators to complete the totalising spectacle. And although he can't claim credit for the last bit, it is Bizzazz indeed. 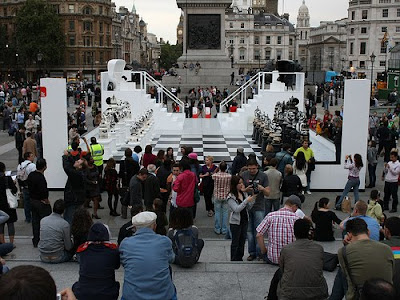 Did he strut his stuff on a chess set as a modern rite of artistic passage, a king size virility test loved up by Hirst, Emin, and the Chapmans of the BritArteratti, or rather, and tamely, because was invited to by the London Design Festival, providing the opportunity to make a truly site specific work: The Battle of Trafalgar (his title for it) installed in Trafalgar Square! Thus it is in a grand tradition of historical chess sets such as the Battle of Waterloo, Capitalists v Communists and so on, including one he may not wish to be reminded of: 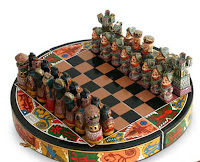 But whatever the motivation his set is expressed in his personal vocabulary, a pidgin of styles, a language that grabs your attention. 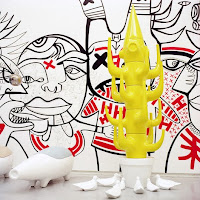 Hey, I'm talking to you.

The pieces themselves are inspired by the skyline of London's historic buildings. They lend themselves to it, Wren, Hawksmoor and all. You could shrink the Monument to the Great Fire for d1, and a reduced Tower of London would do nicely in the corners. 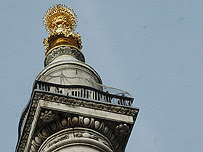 The signature decoration with its definite calligraphy and black and white colour scheme (embellished with a bit of bling) also appears in his graffiti-style art-works (there's a couple of, background, examples above). The marks are bold and humoresque, making each individuated pawn and theatrical piece a bit of a character, though the "encoded elements of the city of London and its history" (as the blurb puts it) are not so easy to spot: perhaps a bit of Olde Tyme Music Hall, perhaps a hint of Whitehall Farce, perhaps a reference to Changing the Guard, Regents Park Zoo, or the London Eye...

...or, to be frank, to corners of Berlin, Paris and New York, or wherever the Tournament (as the London Design Festival dubbed the design/installation/game show/shooting match: a case of re-packaging for marketing purposes) might play next. It is good sport, as ever, to play a game of spot the influence: so, is there a precedent in the ceramic art of his great, and prodigiously named, Spanish forebear Pablo Diego José Francisco de Paula Juan Nepomuceno María de los Remedios Cipriano de la Santísima Trinidad Ruiz y Picasso? 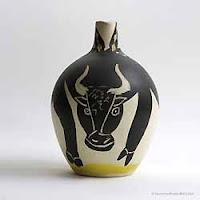 For all their extravagance Hayón's pieces just about work for chess purposes, and let's be grateful that the artist/designer allowed that function shouldn’t be overwhelmed by form, a point of detail lost on other artistic chess setters. However it was a close run thing. The surface decoration, not something we are used to down at the club, comes perilously close to disguising the pieces with dazzle camouflage. 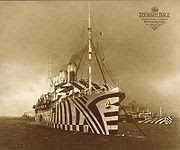 A chess piece in dazzle camouflage

So what do we make of him? Whimsical artist? Cutting-edge designer ? Craftsman upholding noble traditions of manufacture? Questions to intrigue, to discuss, and to celebrate in a Hay ón why festival. And whatever the answer, who could fail to be captivated by his chess creation. It succeeded in making a visual feast for a non-chess audience without giving offence to the time-tested standard chess set. It paid its respects to the host capital, while tipping it (and us) a knowing wink. It combined the fun of the game, with the seriousness of its play, and for week in September it brought a touch of chess magic to Trafalgar Square. Acknowledgements: Jeff. A. Goldberg for use of the "chess scene" and "boxing ring" photos - check out his site for excellent pics.
Chess in Art index
Posted by Martin Smith at 8:00 am

Giant chess boards are looking good but these seemed hard to play than smaller chess boards it will give you a top view and plan your move easily.

Yes, Chess, I agree with you. The top view makes it easier, and some of our guys said it was difficult to follow the game at ground level. Actually, the players were equipped with standard size sets which you can see near the end of Jonathan B's Part II post. I thought these sets were rather tasty in themselves, with a bit of the Bauhaus about them. Unfortunately they wouldn't fit in my pocket.