When we were Kings III

Last week I described Viktor’s astonishing blunder in game 13 of the 1977 Candidates Final and his belief that parapsychology and/or paranormal forces were being used against him. When you look at what was actually going on during the match, however, it becomes much less surprising that he developed these apparently bizarre ideas. I didn’t mention, for example, that immediately after the match Petra Korchnoi (then Leeuwerik) claimed that Spassky had “looked as if he were drunk” throughout the contest. True or otherwise - I’ll have to leave that one to the eyewitnesses - it’s undeniable that Boris’s behaviour in Belgrade was very odd indeed.

Being thoughtful souls the Yugoslavian organisers had reserved parts of the stage as relaxation areas for the players. Placed adjacent to the wings and curtained off from the audience’s view, these special ‘boxes’ contained armchairs in which the protagonists could rest during play. In the first phase of the match both Spassky and Korchnoi made liberal use of their rest areas while waiting for their turn to move.

The early games of the match were not a success for Boris who found himself 4-0 down after nine games. It was at this point that the match took a brisk stroll down Bizarre Street with Spassky beginning to behave “rather like a middle-aged Marxist leprechaun” as Ray Keene memorably put it.

From game ten onwards Spassky didn’t just visit his box when Korchnoi was on the move, he actually played the entire game from it. Yes the whole, complete, total game. He would venture out for the few seconds it took to make his move before immediately scuttling back to the safety of his rest area. He didn’t even need to spend any time at the table thinking because he analysed looking at the large demonstration board that had been located towards the back of the stage in a spot visible from both boxes.

Korchnoi evidently found playing a virtually invisible opponent extremely disturbing and said that he felt like he was taking part in a simultaneous display. The course of the match was immediately disrupted with Korchnoi himself taking a time-out and further delays resulting from a bitter dispute that erupted between the players.

Game ten actually took over a week to finish. Viktor did eventually emerge the winner but only after obtaining a lost position for the first time in the match. In fact by the time game ten was over he had already lost game eleven and he would go on to ship three more points in succession including a defeat on time in a favourable (“clearly superior, if not winning”) position and blundering his queen away as we saw last time. Suddenly Spassky was just a point behind.

Nervoses of players is normal, as in one match it is decided about prospects opening the way to glory and great sum of money (sic).
Bozidar Kazic

- the real cause of all the strangeness in Belgrade or was there something else at play?

As remarkable as a player spending virtually the entire game away from the board is, it doesn’t necessarily follow that Spassky was doing it to give himself an opportunity to conjure up the spirit of Aleister Crowley or Chan Canasta. Korchnoi’s camp, if not Korchnoi himself, felt that it was nothing more than an attempt to disturb their man’s state of mind - a desperate ploy from an all but defeated foe. Boris later countered this point of view saying that he’d first had the idea back in Reykjavik when he found that being in the spotlight for long periods of time made it impossible for him to focus. In his support many observers, Sir Stuart Milner Barry amongst them, argued that while Spassky’s behaviour might well have been eccentric he was doing nothing more than creating the conditions that best aided his concentration.

Clearly ‘cynical ruse’ and ‘genuine match tactics’ are plausible explanations of what Spassky was up to and yet both leave questions unanswered. Why, if this was a plan inspired by the match with Fischer, was it not employed during Spassky’s encounters with Karpov, Hort or Portisch? Why leave it until he was 4 games down against Korchnoi? Why, in two separate official documents, did Chief Arbiter Bozidar Kazic say that Spassky had told him he wasn’t sitting at the board when it was his own turn to move because “something” was distracting him when he sat at the table? On the other hand, if it was just a last chance saloon gambit how to explain the fact that Spassky had requested before the match had even started that rest boxes should be made available to the players? 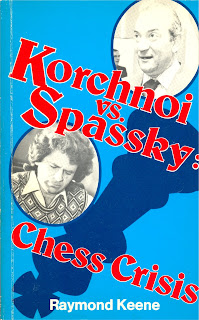 Lots of questions - but the biggest mystery of all is not so much the existence of the players’ boxes but their location. The players’ rest areas were not situated on their own side of the stage as you might have expected but instead were situated behind each other’s chairs. According to Korchnoi this was at Spassky insistence and although Kazic’s Arbiter’s Report is vague on this point it’s certainly true that when Korchnoi’s repeated objections led to positions of the boxes being reversed, Spassky quickly launched a counter-protest demanding that the status quo be restored.

Why was the placing of his box behind Korchnoi’s box so important to Spassky? I’ve yet to find a satisfactory answer to that question, partly because an open letter he published when his appeal was over-ruled does nothing whatsoever to clarify matters or quash suggestions that there might have been a hidden agenda at play. Spassky’s statement that Kazic’s decision, “does not supply me with the necessary conditions for quietness when I am on the move and it does not give me any guarantees that I will not be disturbed by my opponent” may well have been true but it’s far from obvious why it was more so just because his rest area was placed behind his own chair rather than Korchnoi’s.

In the light of an almost constant occupation of his rest area together with the determination to keep his box placed behind Korchnoi’s back, it’s not hard to see how the thought that Spassky might be up to something underhand could develop. For somebody predisposed to believe in parapsychology, as Korchnoi most certainly was (and is), extrapolating from “up to something” to off-the-board, indeed other worldly, attack is not an impossible leap to make. That Korchnoi’s results improved as soon as the boxes were switched over can only have reinforced his belief that Spassky was somehow involved in paranormal activities.

As it happens Spassky’s last win came in game fourteen, the first time his box was placed on his own side of the stage. Apparently not convinced that this would be enough to tip the parapsychological balance in his favour, Korchnoi decided to fight Spassky with his own weapon and he too played from his box. This led to a game totally unique in the history of world chess as for 99% of the session the spectators present in Belgrade that day saw a table, two chairs and a chess set and an otherwise completely empty stage. Even for a match that had already experienced more than its fair share of oddities this must have made quite a strange impression.

Boris wasn’t done just yet however. The session neared its end and with the shortage of time forcing both players to actually remain at the board for a change everybody was waiting for Spassky to make his 31st move. Little could anybody have known that he was about to crank the weirdness dial all the way up to eleven.

“Korchnoi said he felt like he was taking part in a simultaneous display ….”
Bozidar Kazic’s letter to the players – reproduced in Chess Crisis - written in response to an official protest from Korchnoi following game eleven.

“Clearly superior, if not winning”
again, RDK in Chess Crisis

“Korchnoi’s camp, if not Korchnoi himself ….”
Writing in The Spectator David Levy, closely associated with Ray Keene back in those days, concluded that Spassky had “decided that he was so far behind Korchnoi that fair means would not suffice for victory and foul methods had to be employed” – cited in BCM vol 98 #3 and Chess vol 43 #785-786

“… he’d first had the idea of such a strategy back in Reykjavik ….”
Boris Spassky cited in My Great Predecessors V (Everyman Chess: London 2006). Unfortunately the origins of the Spassky quote is not made explicit. Neither, incidentally, is the author of this section of the book made clear – clearly not Kasparov it's probably Plisetsky.

“… two separate official documents ….”
Kazic’s letter to the players after game eleven and Arbiters Report at the end of the match – both reproduced in full in Chess Crisis.

“According to Korchnoi this was at Spassky insistence ….”
Viktor Korchnoi, Chess is my life, Olms: Zurich 2005
www.edition-olms.com

“… Spassky quickly launched a counter-protest ….”
via his second Bondarevsky according to Kazic’s Arbiter’s Report

“… an open letter he published….”
Spassky’s letter is reproduced in Chess Crisis

Presumably Spassky doesn't have any inclination to write a book about his chess career with his take on all the off-the-board stuff that happened. It would make fascinating reading were such a book to be written though.

Certainly agree with that Angus.

I thank an anonmyous correspondent for pointing out three typos in the article - which have now been corrected.