I once heard an established poet instruct his young protégé to put away the poem he'd newly written, and not look at it again for at least six months. Only after finding the crumpled pages musty at the bottom of a half-forgotten drawer, the poet explained, only after rediscovering the words afresh, reading the words anew, almost as if a first time reader - only then would the protégé be able to assess whether his poem was worth reading, whether it really expressed what he thought it expressed, whether it was worth sharing, publishing.
With my chess games, as a rule it doesn't usually take me six months to dismiss my efforts as uninteresting to others. A few days later I see the strategical problems that gripped me on the board and I failed to solve - the tactical sequences that tortured my little grey cells until I blundered through them - the resignation that caused me a nightmare or two - or the smile that stays until morning with victories - I see all that effort and emotion - the game and everything - as nothing but the thuds of wooden swords, waved about haphazardly by toddlers pretending to be titans, fumbling impersonations of the grand battles that characterise truly great chess; a glib and obvious limerick that I dreamed a grand treatise or perfect sonnet, if you prefer. How quick the dream shatters.
But rules have exceptions, and today I'm going to proudly declare a loss I suffered last week against Redhill's Michel Abbink as: actually quite interesting. Or at least, featuring several interesting moments. The first occurred as early as move 6, with myself as black to play: 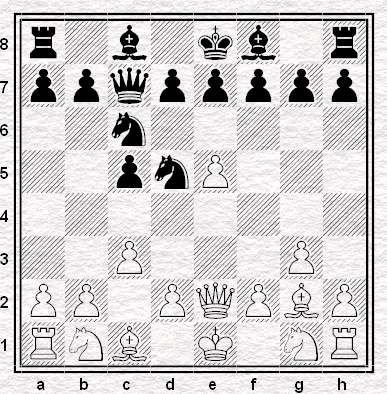 Not so interesting, you might think - obviously an off-beat line in an already off-beat Sicilian. Except the surprising 6...Qxe5!? is possible, since after 7.Qxe5 Nxe5 8.Bxd5 Nd3+, black is winning back his material in one way or another. After a long think, I decided not to play this, thinking that the relatively closed position after 9.Kd1 Nxf2+ 10.Ke2 Nxh1 11.Bxh1 wouldn't have suited my bishops and rooks: 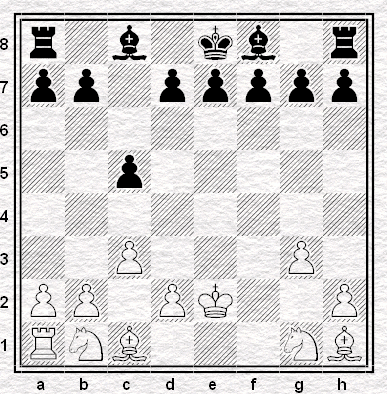 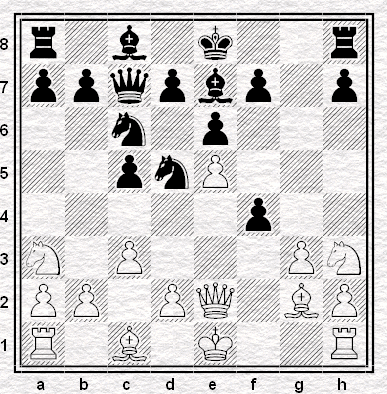 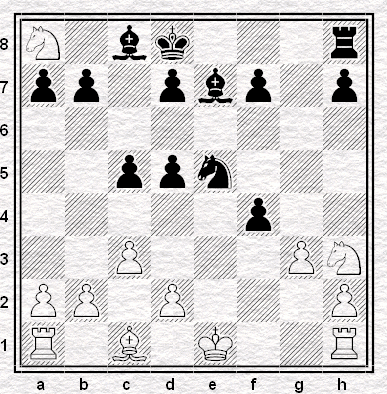 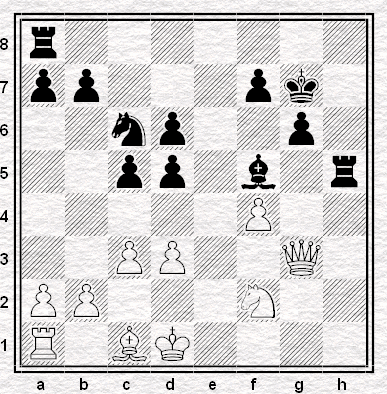 The computer doesn't quite agree, suggesting that white has a clear advantage. But from a practical point of view, the white position is not very easy to play at all - awkward, undeveloped, and with the expectation based on the material situation (and indeed the glances of some of the spectators) that the win should be straightforward. The game continued 24. Bd2 Rah8 25. b3 Rh2 26. Kc1 Ne7 27. Kc2 Be6 28. Qf3 Nf5 29. Rh1: 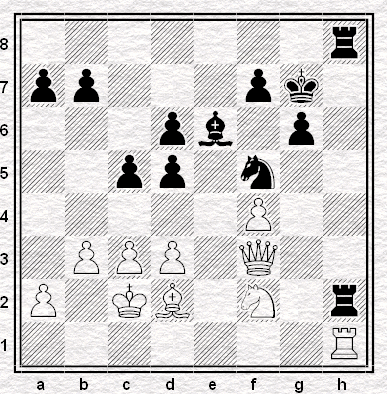 This is the final interesting moment of the game, interesting for all the wrong reasons, interesting psychologically, depressingly so. Faced with both chess and psychological problems in the conversion of his advantage, white has just blundered. But black is not free from psychological problems either: feeling a mixture of tired after a long evening and pleased with my creative play, I had at this point simply stopped calculating, my tactical radar hardly spinning, and I unthinkingly played 29... Rxh1, going on to lose. If I'd seen the position as a puzzle on a blog, say, I would have found the correct move in no time, I am quite sure.

Still, at least the game was interesting . . . Or should I have waited six months before deciding to publish this post?
Posted by Tom Chivers at 10:10 am

I don't suppose you spent any time seeing if a knight fork could be organised, found it couldn't and then stopped looking for tactics? I think that may be quite a common syndrome, pursuing the wrong tactical idea.

Yes - quite possibly I gave up on tactics because I rejected the tactical ideas I had seen (at some point ...Bxd3 is possible, but it allows an effective f4-f5 so I rejected it.) Good point.

Hi Jonathan B. Going off topic I noticed you mentioned playing for Southampton University Chess Club on the ECF Forum. I think you are a similar age to me, so when was this? I played for them from 1991-93. I remember Clint Wells (capt), Mark(Maz)Hann, Fraser McLeod and some guy called Jeremy(?) Fox something.

To continue the poetry analogy, the French poet and critic Paul Valery said 'A poem is never finished, only abandoned'...and do we abandon looking at chess positions?

It occurs to me that this is a bona fide, perhaps even perfect example of the winner of the game being the player who made the next-to-last mistake.

Yeah. The set-up in this competition is as follows. The away player offers the home player a choice of two finishes from three; i.e., offers two of rapidplay, adjourn, adjudicate. I offered rapidplay and adjudicated - I'm just too busy for adjournments - and he went for adjudication. As the game went, rapidplay would have given me better chances!

Deffo remember Fraser. Clint is ringing a bell too but I can't quite remember him.

Did you ever go to the Universities Team Championship. I went a couple of times I think - Aston and the Swansea.

I shared a room both times with Gareth somebody I think. Also remember Bob Noyce (mainly for it being extremely unclear how he qualified for the Southampton team. Think because he was 200+ nobody asked that many questions.

Do you remember the rock disco?

I don't remember you but our paths must have crossed!

I didn't actually go to Soton Uni, just played for them. I went to LSU, a far superior and now defunct college just down the road with vast numbers of girls - ha ha.

Fraser I think worked in the Uni library. Clint(on) was about 170, always got in time trouble, pleasant, wore glasses, emigrated to New Zealand.

Don't remember Bob Noyce playing for us though he certainly was around a lot. In fact I can't remember who was board 1. I thought it was me but I distinctly remember playing against Richard Webb on Bd 2 with Charles Morris on their Bd 1. I'm sure it wasn't Bob Noyce.

Note to those interested: I originally wrote "half-forgotten draw", not drawer, until my Mum told me this is an error; that it is drawer, not draw.

Turns out this is correct in the UK, but not in the States. Here's the relevant OED entry - 7b under draw (n):