When we were kings II

… we knew how to blunder

Last week I wrote of the golden age for chess that grew out of the Fischer/Korchnoi challenges for the World Championship happening to coincide with the cold war and a Soviet Union that wielded chess as an ideological weapon. It’s undoubtedly true that back then the game was much more prominent in the mass media than we find today but off-the-board factors are just one reason why the 1970s were so good for chess.

Looking at the game itself, Kasparov considered the developments of the era to be so fascinating that he had his minions ghostwrite a whole book about it. Although it’s definitely an interesting read Revolution in the Seventies rather lets itself down by only being concerned with the good chess of the time. That’s a great pity because not only is bad chess inherently fascinating (note to self: really must get back to this series) but specifically, the best justification ever produced for a chessboard cock-up comes from a 1970s candidates match. 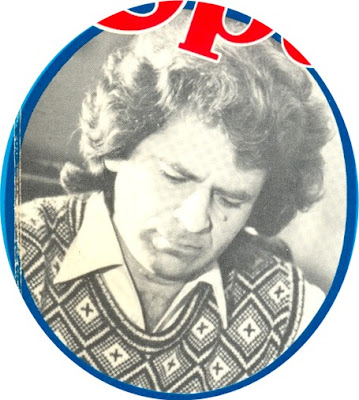 A decade summed up in one small picture –
The 1970s: bad hair, bad clothes, great chess

Take a look at this:- 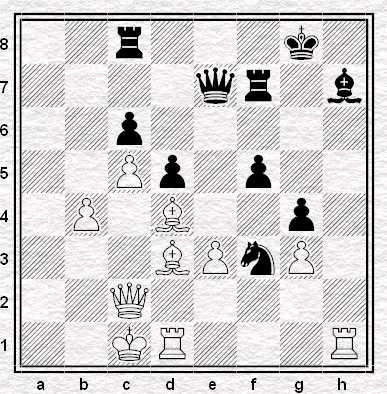 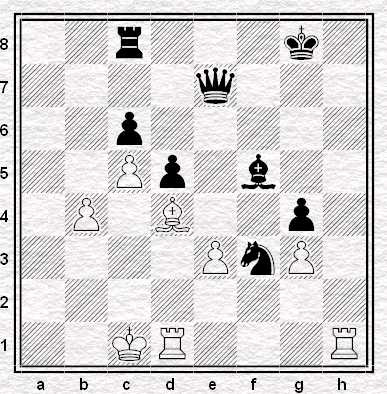 and then promptly resigned.

Vik must have been planning to deliver mate on h8 but had overlooked that when Spassky recaptured on f5 with his rook he created a loophole which allows his king to run to safety. This is the sort of mistake that would have me, an average club player, kicking myself for days so it seems barely possible that a man challenging for the right to play a World Championship match could balls things up in such a manner.

I thought up a mating combination with a queen sacrifice. Some voice whispered to me: ‘Go on, sacrifice, be a man!’ And I gave up my queen, but there turned out to be no mate, and I promptly resigned …

How can this behaviour be explained?

Well, we might begin by observing that Korchnoi was under a lot of pressure due to the match situation and was obviously in a disturbed frame of mind throughout game thirteen. He’d just lost twice in a row and a dozen moves before his blunder he’d approached the arbiter and requested that either the game be transferred to a room without spectators present or that the curtain be drawn across the stage to separate the players from the audience. Clearly not a happy bunny.

OK, but what about this:-

I left the stage and went to get my coat. When, a few minutes later, I walked across the stage, now wearing my coat, Spassky was still sitting at the board which I had left.

That does sound a little curious at first. As it happens, though, it wasn’t particularly unusual for Boris to remain at the table for some time after play had finished and in fact he’d done exactly that after games two and three, both of which he’d lost.

So Spassky hanging around on stage after the game was insignificant and Korchnoi’s blunder was nothing more than a high level instance of chess blindness brought on by the strains and stress of a difficult match? I’m afraid not. This was the 1970s remember - such prosaic explanations really won’t do.

The extraordinary but genuine truth is that Korchnoi was convinced that his thoughts had been invaded by paranormal forces and that Spassky was unable to get up from the table when the game finished early because he had been “programmed” to act as a “medium” for the full length of the session. True or otherwise, it’s undeniable that Boris was in the middle of staging an incredible comeback from what had appeared to be a desperate situation. After sixteen games he was just a point behind having been 4-0 down after nine.

Once more Korchnoi takes up the story:-

In the 17th game of the match I had a positional advantage. I was thinking of how to transform this as soon as possible into something more tangible. I saw a pawn sacrifice – with the aim of breaking through my opponent’s defensive lines. I had plenty of time on the clock and I again began considering the consequences of the sacrifice.

So far so game thirteen, but this time,

I sensed something … Spassky was looking at me, making hypnotic gestures with his hands. I distinctly felt that they signified: ‘Go on, sacrifice, be a man!’ I again looked at the pawn sacrifice. The fog in my head cleared. It turned out that I had overlooked something in not a very long variation – if I had sacrificed the pawn, my position would immediately have become hopeless. I took myself in hand and made another move.

For Korchnoi this was the key moment of the entire contest.

When a few minutes later Spassky came up to the board to make his reply, he was as white as a sheet. I had not obeyed him! At that moment, precisely at that moment, he realised that he had lost the match!

Ray Keene, present as journalist and Korchnoi’s second, complained of “too much speculation concerning parapsychology, death rays, black magic and witchcraft” on the part of those writing about the Candidates final but it’s clear that Korchnoi believed both in the existence of such phenomena and that they had been deployed against him in Belgrade. Immediately after the match had concluded he was reported to be “seriously claiming” in the Sunday Times that “hypnosis and counter-hypnosis” played a significant role in the contest and his conviction had evidently not wavered by the time he came to write his autobiography, from which the passages cited above are taken, a quarter of a century later.

So there you have it. Korchnoi blundered in game thirteen because Spassky managed to control his mind at a critical moment but ultimately won the match when he learned to repel such invasions. It’s easy to mock Viktor’s explanation but I find it infinitely preferable to, say, Topalov/Danailov’s “I lost because he had a computer hidden in the khazi” whine. At least Korchnoi actually believed what he was saying and hadn’t just made some bullshit up to try to destabilise the opposition.

That’s the problem with modern chess. There’s no authenticity in wacky explanations for blunders anymore - and that's just one more reason why chess was better in the 1970s.

Surprised there hasn't been more comment on this blog entry?

In particular I expected Korchnoi's infamous "medium" game with Maroczy's ghost to get mentioned in the comments, if not the actual piece :-)

Hello anonymous, thanks for dropping by.

I did initially include a reference to the Maroczy game but in the end decided to save it for it's own post at some later date.