The Board Beside Me IV

I am not going to tell you who played black beside Chivers in the game that is the subject of today's piece. In fact, the blunder he produced was so bad, I'm not even going to tell you his opponent's name, nor the league we were playing in, the date of the match, the name of our two clubs, nothing, just in case some Sherlock Holmes out there works out who black was. The risk of public humiliation to my team mate is just too strong, and what a naming and shaming it would be. Thus I give you, Anonymous A versus Anonymous B - player B being on my team, sat beside me, and to move: 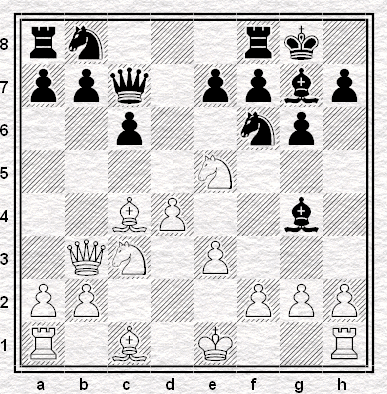 At first blush from the neighbouring board, this looked like a relatively ordinary if slightly awkward position - until I realised that the routine 10... e6 loses a piece to 11. f3, because the bishop will soon be trapped. What is black to do? One way or another, he is going to lose at least a pawn for nothing, and a significant pawn at that. I had the wacky thought that maybe 10... Nd5 was playable, sacrificing a different pawn to ease the pressure through exchanges, not noticing that 11. Nxg4 nets a piece for nothing. But you can make that kind of casual mistake when looking at other people's games, it doesn't matter.
What matters is what the player himself does. My team-mate B was a reasonably strong player and I felt confident he would find a way to make a battle out of it. And when he played 10... Be6, Chivers on the neighbouring board felt impressed by the audacity of the trap he was setting: seeing if his elderly opponent would blunder into the smothered mate that was not there. And lo, an unthinking white casually obliged with 11. Bxe6 fxe6 12. Qxe6+ Kh8 13. Nf7+ Kg8 14. Nh6+ Kh8, and after a few happy moments of, presumably, internal celebration here . . . 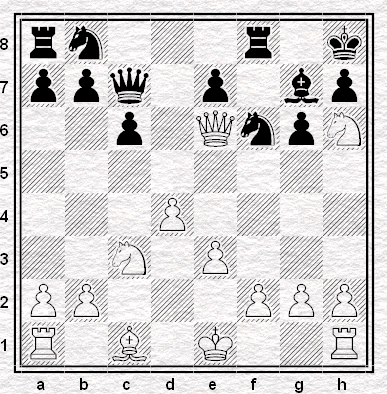 . . . he wafted his queen to her deathbed on g8. Yes, 15. Qg8+ was really played. But if only this story of the board beside me ended there.
At this point, I was now watching from behind B, and was completely elated. An early victory for my team mate! What a brilliant piece of psychology! Our team were firm favourites now to take the match, too! Player A, meanwhile, had wandered off, looking contented, deciding no doubt that the polite thing to do was to give Player B a few minutes at the board to compose himself before resignation. The egg that would be on A's face, when he returned to find the knight on g8! I walked around to the side of the board to watch B crown his fine coup with 15... Nxg8.
I watched Player B sit there, smiling away, savouring the moment. Then his hand reached out - but for the rook. My eyes ejected themselves out of my face with a hooting noise, like in cartoons. B retracted his hand. Ah! I thought, a moment's comedy for the spectators. The bluff that he was going to capture with the rook! Haha! Pints and chortles all round after this, surely. And then out B's hand came again, and 15... Rxg8 indeed was played, and mate duly followed on the next move with 16. Nf7#.
Soon B realised his mistake, since the reaction of the spectators must have alerted him to the fact something unusual had happened. I was too devastated at this point to pay much attention, but I believe he communicated something about knight not rook to his opponent, which A construed to mean that 13... Rxf7 should have been played. I don't know.
Back to my game I went, thinking only about the board beside me.

The very definition of tragedy.