Why I am not World Chess Champion

Of the many delights to be discovered in spectating the World Championship, being constantly reminded how bad I am at chess is possibly the most exquisite. Take the following position, Topalov having just played 20 ... h6: 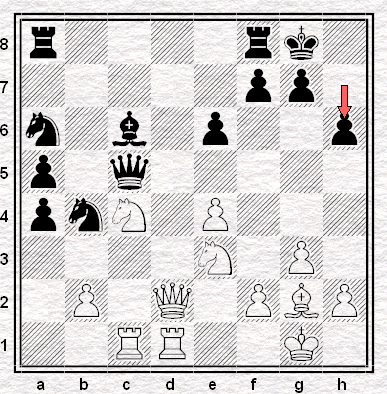 "Drawish now" I kibitzed. And why not? Black is more or less developed, whilst white will pick up an a-pawn, re-establishing material equality.
Drawish, right? Not exactly.
As the game unfolded, I was further reminded of Anand's 2007 Linares victory over Carlsen. In both games black seemingly-successfully defends against queenside positional pressure - but too late realises his forces have been misplaced, as white switches to a decisive attacking on the king instead. The 2007 game I played through more than once at the time, thoroughly going through the victor's notes in New In Chess. But if pattern recognition is the key to chess improvement, then the lessons from the game were alas far from learnt.
I have enjoyed being wrong about the world championship in other ways too. One of the tacit predictions I made to myself was that there would be no "psychological choice of opening style". Meaning, I expected neither player to particularly angle the game toward something unsuitable for the opponent - no equivalent of the Berlin Wall, no equivalent of those dodgy, dynamical slavs. Au contraire. Excluding the Grunfeld, Anand has played like Kramnik, Topalov's nemesis. And the similarities between the Slav endgame after 1. d4 d5 2. c4 c6 3. Nf3 Nf6 4. Nc3 dxc4 5. a4 Bf5 6. Ne5 e6 7. f3 c5 8. e4 Bg6 9. Be3 cxd4 10. Qxd4 Qxd4 11. Bxd4 Nfd7 12. Nxd7 Nxd7 13. Bxc4 and the Berlin Wall hardly need pointing out.

My overall prediction for the match was that Topalov - the best prepared player in the world, lest we forget - would win. I could only imagine that he wanted it more, with his many points to prove, whilst Anand does not seem to have particularly enjoyed being World Champ. At the half-way stage it's odds-on I'm wrong about this too.
Nonetheless, I'll venture one more prediction. Assuming Topalov doesn't win with black tomorrow, I think he'll be the first to blink and switch his opening move with white. Not only that, I think he'll switch it to 1.c4 in game eight, or possibly ten, if he is still a point behind then. A reversed Sicilian would be right up his alley, anything else would be a roll of the dice, and he could meet 1...c6 with 2.e4!?
Crazy? I've been wrong about everything else. Surely I'll get something right before the match ends?
Posted by Tom Chivers at 10:01 am

... Rg8 in the Slav was introduced by Kramnik against Topalov in their 2006 match of course. I wonder if Vlad got the idea from Game 3 of Kasparov-Kramnik 2000?

Incidentally, it's slightly curious to me that Vishy should adopt this 'play like Kramnik' strategy. After all it's not as if Kramnik completely crushed Toppy. He only won after a four game tie-break didn't he?

Talking of being wrong ...

I just kibitzed that Anand probably wouldn't take the exchange Toppy offered today and when I looked (less than 30 seconds later) he had :-(

Without Danailov's gamesmanship, Kramnik probably *would* have crushed him, though :-)

When I came into Tom's office at about quarter to six yesterday he was watching the Topalov-Anand game and decided that it was 'drawish'. In the ten minutes it took us to go downstairs to buy beer, Anand had resigned...

Point is, he was right! Anand only lost by a horrendous blunder :-(

That's twice now he has gifted Topa the full point.......