We are not amused VIII

Once again, after a little wait, chess of sorts, appears in a London art gallery. At Tate Modern this time, in an exhibition of multiple media art-work by Mexican Gabriel Orozco. In fact, there are three chessed-up pieces.

First along there’s a 16x16 chess board, in four colours, with sixty knights of the same stripe. No other pieces, no kings, so no mate – they are Horses Endlessly Running (1995). 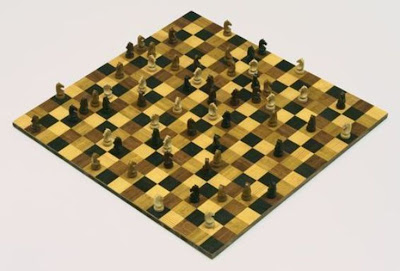 You can read in the Tate bookshop that Orozco is a “consummate games player”. Chess must be one of them because the knights are placed with a knowing eye. All but eight (I’ve counted them) are a knight’s move from a partner, and the others are just a hop away from finding one. For now the "horses" seem immobile and zugzwanged, but at any moment some deus ex machina might send all sixty spinning into an infinite repetition of moves.

The piece negates our usual motivation: we play to win (mostly). Same thing in another room where you can see Orozco playing with another game: bar billiards without pockets, the red hanging on by a thread, and no pots possible. 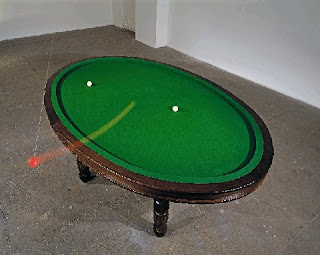 Go on. Grab a cue, make up some rules, and go endlessly funning, even if Orozco paradoxically says (in a video accompanying the exhibition) that his art work "is not about entertaining or mesmerising”. Instead, he says it “needs concentration” on “what’s behind the gesture.”

What’s that again? “Not about entertaining.” You must be joking, hombre. We are not amused.

Then there’s another chess-vibed piece, and this time you will be looking for "what's behind the gesture" as Orozco prescribes. It is Black Kites (1997). 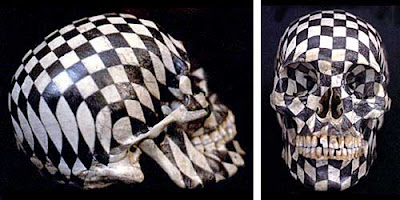 Not much of a laugh in this one, to be sure, just an eerie fascination, with our favourite check motif drawn taut over the grimacing death head. Exculpatory skulls seem to be a Mexican thing, as on the Day of the Dead when they sculpt them in sugar to honour the ancestors. Our man has taken a real skull and decorated it with graphite: a carbon based life-form reincarnated as carbon covered death-form.

It puts Damien Hirst’s For the Love of God (2007) well in the shade. He also encrusted a skull with the black stuff, but in the form of ostentatious glitzed-up diamond, in thrall as he is to the bloated money-bags of the international art market. The coincidence with, and contrast to, Orozco, is more than an accident. 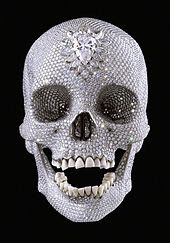 For the Love of Mammon.

There are several of these "invariants" in the show, and once again the bookshelves provide an insight. These “diagrams”, as Orozco calls them, are rule-generated: so the colours, shapes and orientations are determined by six instructions (including, explicitly, a knight hop) creating 672 end-states – all reproduced in one handy volume in the shop, though the three or four in the exhibition are enough to make the point. 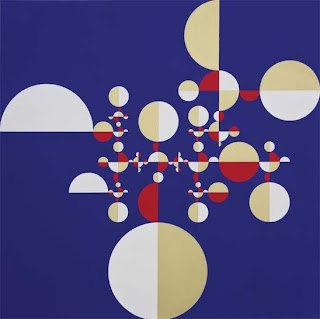 The Samurai series show a lot of Geometry, to use Levitt and Friedgood’s categories, but precious little Flow. If you’ve got the time, and instead of Geometry you want some of the other, pop in to Bridget Riley’s endlessly stunning little exhibition at the National Gallery. 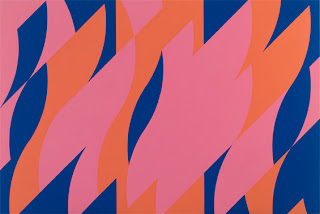 Horses for courses endlessly punning: it's the place to go for a lovely Flow job.

Acknowledgements
Black Kites images come from here.
For the Love of God from here.
Invariant Blue from here.
Thanks to Morgan for the reminder about the Tate expo.

I really like those chessboard skulls. You've had them before I think Martin.

When I snuff it I'm not going to leave my body to medical science - I'm going to leave it to some artist to do a similar job on my bonce. Will make a good trophy for the winner of the mid-season rapidplay I reckon.