Two former world chess champions battle wits to determine the greatest champion in history. After one is mysteriously killed, the other is unsuspectingly catapulted into a deadly conspiracy that he must win on and off the board if he is to escape the same fate. 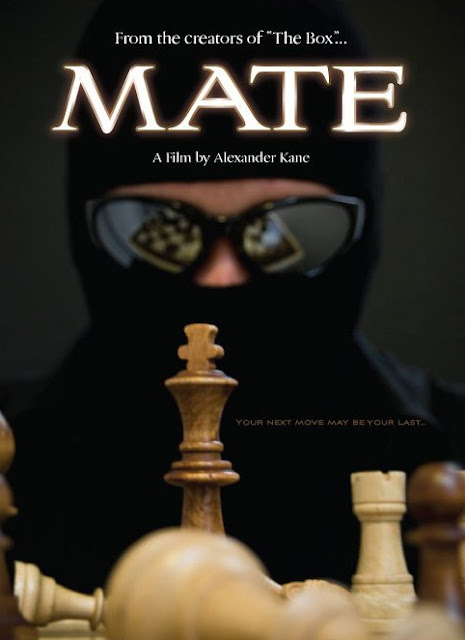 In a world of corruption and deceit, two former world chess champions cross paths and are unsuspectingly drawn into a deadly game of mystery and suspense. Michael Foster and Kyle Kessler are long time arch rivals in the highly competitive game of sixty-four squares. Each has staked his claim to be the best grandmaster of his time. Each has arguably been deemed the greatest chess champion to ever play the game. Yet, beneath the surface of tactics and strategies, there is a truth that engulfs them beyond their calculated geniuses; a truth that suddenly turns their world upside down; a truth that unfolds and forces them on the run from a group of killers who have coerced them into a dangerous game of intrigue. In the world of sixty-four squares, where lies intersect the truth, nothing is what it seems. Inside the mind of a chess king, reality is merely an illusion.

Yup. I've said it before and I'll say it again: Nothing is black and white in chess.
Posted by Tom Chivers at 8:08 am

Thinking of dumping the cap and adopting the balaclava look for future games at Golden Lane.

I very much doubt that any such film will ever be made, my reasons ranging from:

a. it's obviously rubbish, not that that stops other films being made ;
b. it's rubbish even by those standards
c. it was actually touted as upcoming nearly three years ago, when it appeared on Susan Polgar's ever-discriminating blog.

Meanwhile in further culture news, I thought the Rafa Benítez story a tad more convincing than most celeb-loves-chess news items.

One of these days, I'd like to do a meta-story on the "celeb plays chess" stories, and actually play such celebrities at chess. Tease out how good they actually are, and all that.

Good idea for a simul Jack.