Like many articles written by those who do not actually play, the story contained not only some errors, but tended to over-rate substantially the strength of its subject. Some problems with the story were highlighted by Dylan Loeb McClain in the New York Times, who cast doubt on the description of Mutesi as a "prodigy", observing, quite reasonably, that her age might well be greater than the fourteen officially attributed to her, and that her actual playing strength is not particularly high.

He's right on both counts, as he would have been right to note, among other things, that that article uses "matches" where it should use games and mistakes Fool's Mate for Scholar's Mate. For my part, I'd forgive the use of "prodigy" in this instance: a prodigy doesn't have to be a Mozart, and anybody who has got as far as Mutesi, from where she began, has achieved something extraordinary. For that matter, I'd also forgive the mistakes in the piece, simply because the piece itself is so engaging that its errors are insubstantial in comparison. 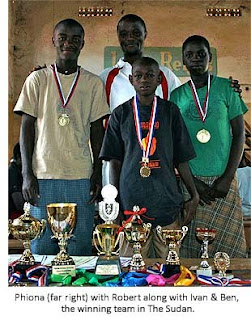 Talking of comparisons, if we wanted a piece without the sort of mistakes that a chess specialist would never make, you'd want a chess specialist to write it, wouldn't you? And would that have been impossible? After all, where were the world's chess press while Tom Crothers was writing about Phiona Mutesi?

All perfectly legitimate complaints without a doubt. But seeing as there was nothing to do, could they not have had the minimum amount of imagination required to go round the playing hall, go round the hotels, and find some stories? Find Phiona Mutesi? Or find somebody else, among all the hundreds of players from dozens of countries all over the world, who were sitting there right in front of them?

I mean, dear God, how hard can it be? The world's chess press attended the the single most interesting chess event in the world, for a fortnight, and the single most interesting piece, by many a country mile, that came out of that event was written by none of them. Did none of them have the wit to realise that something of the sort might be of interest to their readers? Did none of them even meet Tim Crothers - during the two weeks that the world's chess journalists were parked in a handful of Siberian bars talking to one another - and think, hmm, maybe I should find a story like that too?

Apparently not. New In Chess went all the way to Khanty-Mansiysk and all they brought back was a lousy piece of saloon bar prejudice. Perhaps, next time they are ruminating on how badly Kirsan and his cronies have performed, they might also like to consider how badly they themselves has performed.

Tim Crothers showed what could be done, and he doesn't even seem to know how the pieces move. Good for him: not so much praise for Dirk Jan ten Geuzendam, who, in common with some others of his profession, has a reputation for not asking difficult questions. Perhaps he should start asking them of himself.


[Photo and caption: Sports Outreach]
Posted by ejh at 7:55 am

By the way, I learned after writing this piece that the New York Times Chess Blog is closing. This is a shame.