The Board Beside Me V 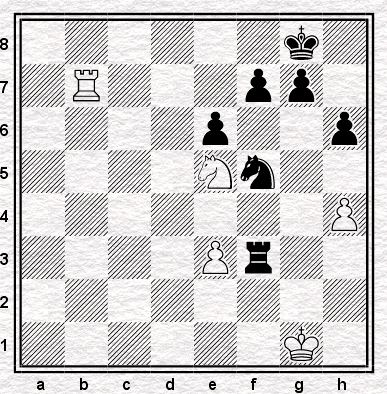 Our Guy v Their Guy, Aragón Team Championship February 2011
So I was playing in this match a couple of Saturdays ago. I was on board two, of four, and around the time I finished, this was happening immediately to my left, on board three. Black was to play.

Black is of course winning: White had been very lucky to survive a deeply dicky middlegame and rather than welcome the equal ending which actually arose, he'd tried to win it and only succeeded, as you may have surmised, in achieving a position in which both sides staged similar attacks on the opponent's king but Black's was a couple of tempi ahead.

A couple of tempi shortly became a couple of pawns and when the position above was reached Black, whose rook is attacked, had the opportunity to take a third with that same rook. At which point White's resignation might have been considered somewhat overdue.

I almost wrote "Black can win as he pleases". But the problem, perhaps, was that he couldn't win precisely as he pleased, since his pleasure was, apparently, to keep all four of his pawns, which goal could not be achieved by the otherwise obvious 1...Rxe3 2.Nxf7 Nxh4. So how to preserve the vital f-pawn?

Black hit upon the solution: the zwischenzug 1...Nd6 which countered White's attack on the Black rook with a similar attack on the White rook. 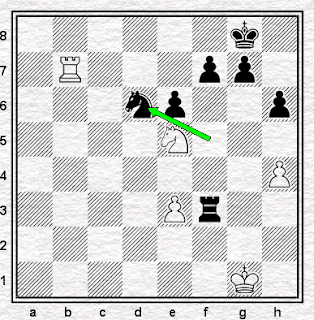 Ingenious! Now after the rook moves, Black can take the pawn on e3, which also means he'll be attacking the White knight. No doubt White also considered lines such as 2.Rd7 (or Rb6) Rxe3 3.Ng4 Rg3+, maintaining his attack on the knight and thus consolidating his material advantage. And of course, preserving the vital f-pawn. 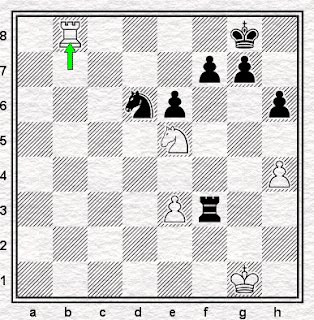 which he duly did. There followed a king move and the removal of Black's rook.

After which, Black resigned. He didn't look particularly distressed. He didn't actually look like he thought anything abnormal had happened. I suppose it's not compulsory.

"He didn't actually look like he thought anything abnormal had happened"

That sort of thing is pretty normal when I play.

Perhaps he just forgot his rook was en prise.

It happens quite a lot. You realise that you have to move your Rook / Queen but then you start thinking about other aspects of the game and see a good move, forgetting that you have a piece en prise.

Didn't Keith Arkell do this at the last British Championships?

Keith Arkell actually played the second move of a sequence first; he said to himself "I'll play 23.Qb3 and then Kf1-e2" and then for some reason played 23.Kf1??