Still Cagey After all These Years

Yesterday's post on the state of chess journalism over the last few decades prompted a reader to respond questioning my feeling that the British Chess Magazine's coverage of the 1978 Buenos Aires Olympiad is a prime example of very poor journalism. I shall answer our anonymous friend in the comments box to the original post in due course, but for today I want to thank him/her for drawing my attention to what s/he calls,

"Jon Mestel's brave and risky protests against the Argentinian junta".

This was not something of which I was previously aware, the BCM not having found Mestel's stance (whatever form it took) worthy of a mention. That sort of thing, I suppose, was just not their cup of tea.

Back in the day a chap might write half a page on a foreign chap's disorganised hotels, but he certainly wouldn't want to get involved in any distasteful business about death squads and whatnot. "Dirty War"? Is that something to do with house keeping not being up to scratch?

Anyhoo, if anybody out there has any more to say about Mestel's protest do please make a contribution to the comments box.  I'd love to hear more about this. 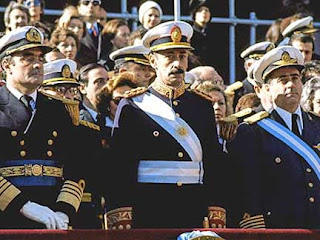 The comment sparked a memory, though. Hadn't I read something similar somewhere before? Another Olympiad, another stand on principle from Mestel and another questionable editorial policy from the BCM?

It took me an hour or two last night, but then it came to me: The British Chess Magazine of September 1986 (volume 106, number 9), page 410. Correspondence from Dr. Mestel observing that while the BCM had reported that some English regulars would not be going to the Dubai Olympiad the reasons why had not been given.

Well perhaps, you might be thinking, the BCM didn't know why the English players didn't want to travel. Ah, but they did.

"This issue was raised in my letter of last October which you declined to publish … It also arose in the press conference given by Campomanes at the GLC tournament, but again you did not air the issue."

And the thing that the BCM were so reluctant to tell their readers about? It was the fact that Israel were not to be invited to the Olympiad.

Fair enough, I suppose. These discussions about anti-semitism, international politics and FIDE discriminating against a member country are all a bit tiresome after all. A chap doesn't want to get involved in any of that does he?

Mestel organised a chessplayers' petition about human rights and the disappeared which he then sent to the junta. He didn't get great support; only one GM (Jan Timman) wanted or dared to sign the petition.
I seem to recall hearing Jon had some problems after the Olympiad finished before he flew home, but 30 years on detail is hazy. (No doubt Jon would remember.)

Thanks very much for your information. Hopefully we will be able to return to this issue in a future post.

Curious to know how Keene got the job of seconding Korchnoi. And why were none of the Russians appointed?

Korchnoi defected in 1976 before the start of the Candidates' cycle. I'm pretty sure he wouldn't have been keen to work with Soviet GMs and vice versa!

As for Keene, he and Korchnoi played in a tournament in Montreux just after Vik's first round Candidates' win over Petrosian. In his autobiography Korchnoi says Keene offered to work with him. In a report in the BCM Keene says that Korchnoi invited him to be his second. Kind of amusing discrepancy: I suppose both could be true.

Keene (and Hartston) had been in Moscow during the 1974 Korchnoi v Karpov match. They commented that they had unofficially assisted Victor as few of the Soviet GMs were allowed too. The Soviet Union wanted Karpov as Fischer's challenger.

By 1976, Korchnoi had defected and was short of supporters. Also there were new ideas coming from the UK that working with Keene and Stean gave Korchnoi access. The defences to 1 d4 involving very early Bb7 are a case in point.

Thanks for the explanation JB. Makes sense.
Re the wider theme of chess journalism, could it just have been fear? For a small publication (in relative terms) a law suit could put them out of business.So they just stick to the chessboard.
Also the chess world is a bit cliquey, and one could be ostracised for speaking up in some circumstances.

Good point. My feeling is that, regardless of what might or might not have happened later, at that stage Keene was a good choice as second. He was quite the theoretician as you say.

Talking about Soviets working for Korchnoi, we might also say that even during the 1974 match he found it difficult to get Grandmaster assistants. That, anyway, was part of his stated reason for defecting.

I do think that the 'small world' aspect of chess life does potentially make things difficult for chess journalism for the reasons that you say.

That said, I think at some point you have to grasp the nettle and say things if they need saying.

As for the risk of a law suit ... I might have been inclined to go with this explanation had there not been so many examples that we could discuss in which a threat of legal action is not really an issue and yet the BCM don't report it anyway.

E.g. Mestel's protest as our (presumably) other anonymous commenter tipped us off to yesterday.

It just occurred to me that a correction is due:-

Korchnoi did have one Soviet on his team: Jacob (I think) Murei. Murei had been allowed to emigrate from the Soviet Union during the 76-78 Candidates' series and worked with Korchnoi alongside Keene and Stean. I guess you'd call him an ex-Soviet by then, though.

By (genuine) coincidence, we're doing bash-the-chess-press again on Friday. If I find time (and that may not be until the weekend, if at all) I might use the comments box to tease out the issues a little further, since it is fair to say that there are good reasons, whether or not we consider them adequate, why the chess press has the failings that it has.