Once was enough VI : Marshall Attack 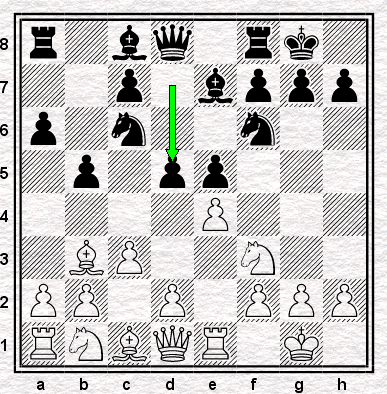 The Marshall Attack. Very big deal in English chess in the 1990s. Nigel Short would have played it against Kasparov, if Kasparov had let him. Michael Adams became - and possibly, remains - the all-time world authority on the opening.

In fact it was such a big deal I even played it myself. Once. Some distance from the standards of Short and Adams, I confess: it was in the first leg of a county championship quarter-final, a tie in which I was the favourite but nevertheless lost. Naturally, I blamed the opening, or at least my choice to play it, which, as we will see, was true up to a point. Even if it was not the entire truth. 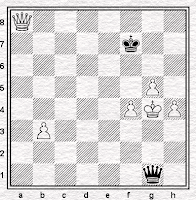 Until 1994, I'd generally been playing the openings I remembered from my schooldays, mostly the Scheveningen with the occasional Petroff thrown in against stronger players. But at some point that year I lost confidence in all of this, stopped playing the Sicilian, stopped playing the Petroff - for that matter, I also stopped playing 1.e4, which I've never gone back to - and started looking around for a Lopez that would work. It took me about ten years.

In fact I started by playing the Fianchetto, 3...g6 (a line I found in Ray's The Openings In Modern Theory And Practice, which I happen to have seen again, and bought secondhand, just this week) and played against Harriet Hunt. That game that ended in a fairly short draw, with Harriet, on receiving my offer, accepting and then saying "but aren't you doing rather well?". Despite this promising start I decided (with reason - 4.d4 exd4 5.Bg5!) that it probably wouldn't stand the test of time. Matter of fact it'd be appearing in this series if I hadn't played it once more, in 1997, on a whim.

So I had to find another Lopez, and I found the Marshall. It took me quite a long time to get round to playing it, because at club level, 1.e4 e5 doesn't often get you the Lopez, and even when it does, it doesn't often get you the main lines. It was my ninth 1.e4 e5 since playing Harriet before I got as far as 7...O-O and even then (against, coincidence fans, Adam Hunt) I got an Anti-Marshall instead. All told it took seventeen open games, two years and eight days to get myself an actual Marshall. Beware of getting what you want, because once I did, I was lost, in one sense or another, as soon as we were out of theory.

In some ways, I think it's ideal: instead of tough defence, which is almost always the way Black has it in the Lopez, Black attacks. It's quite a scary position for White after 17 moves or so, with all of Black's pieces piling in against the kingside. Easy to see how attractive it is. You look at the positions, they feel good.

That's easily established: there's only one Marshall book on my shelves, and that's the one by Nunn and Harding, published by Batsford in 1989 towards the end of the best years of that publishing house, as least as far as chess is concerned. 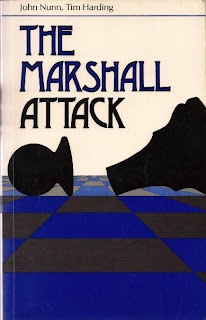 My copy has a Chess Direct label inside, though I'm sure I actually got it cheap and secondhand, probably at one of the rapidplays that used to run at Imperial College London.

I was put off not just by losing, but the way in which I lost: I didn't really seem to understand what was going on. In fact I still don't.

We'd followed theory, by which I meant something I could find in the Nunn/Harding book, until Black's 21st. 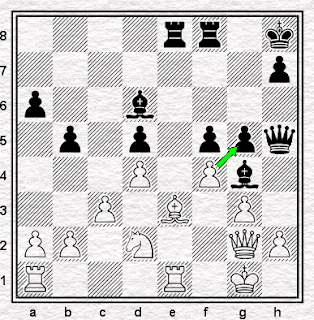 In this position, in the year of the book's publication, Andrei Sokolov had played 22.Qxd5 against John Nunn in Rotterdam. He didn't choose to play 22.fxg5, nor did either Nunn or Harding choose to analyse it in the subsequent book. But White did against me, and it looks just as reasonable to me now, with more than twenty years elapsed and all the time I want to look at it on a computer, as it did back then.

Where there's an obvious capture, that appears to win a pawn, and the book doesn't say anything about it, you'd assume you were missing something: something, now, that a computer would find for you, but something even back then that you could work out easily enough. But I couldn't work it out then and the computer can't work it out now.

So what's Black got? Obviously he shouldn't have continued 22...f4? - though it's an idea which obviously comes to mind, since what else has Black gained from White's f-pawn moving? - as 23.Bxf4 just seems to leave White two pawns up and Black with no attacking chances, but the alternative 22...Rxe3 just transposes into the game after 23.Rxe3 f4 24.gxf4 Bxf4 25.Rg3, as after 24.Qxd5 fxe3 25.Qxd6 Rf2! looks to be enough for a draw. Not that I saw that at the time, mind.

My great old Russian 1.e4 e5 Encyclopaedia throws in the suggestion 22...Re4!? but I'm not about to believe that one either, so until somebody puts me right I'm inclined to think Black had no better than to play into the game continuation, which looks forced, for Black at any rate, until 28.dxe5. 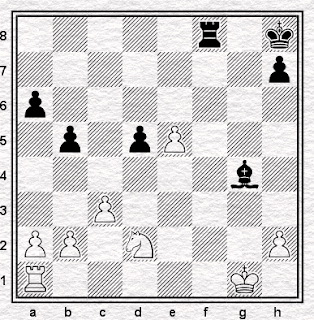 I thought Black might just scrape a draw here if he was lucky (and if I'd played 33...Bg6, which White had luckily allowed me, I might well have got it). But the whole experience put me off. Not going wrong once out of theory, but having no clue and being given no clue how I could have done better. Put me off irrevocably. And probably rightly.

Six months later I had my next 1.e4 e5 and by then, thanks not least to Mikhail Yudovich,

Nil. It's just not suitable.

Not because of that one defeat. (I said above that I gave up 1.e4 around then. I lost the first three games I played with 1.c4, its replacement.) Nor because of that one variation. Theory changes. Nor even because I prefer (from Black's perspective) the sidelines that White can play against 7...d6 to those which he has in the various Anti-Marshalls.

But it was obvious to me, struggling without the slightest success to see what I might have done better, that I was out of my depth. I just didn't understand what was going on.

But I was also out of my depth in terms of the sheer amount of analysis that seemed to be involved. There's lots and lots and lots of it.

Of course there is in many openings, or arguably in any opening if it becomes popular enough. (In 1996 there wasn't too much theory in the Berlin Wall. That's far from the case now.) But in some openings - the Najdorf and others come to mind - it's more crucial than it is in others. The Marshall is, I think, one of these.

Thing is, too, you're only ever likely to get to employ that analysis against players who know it better than you. Everybody else avoids it. (Think of those seventeen games with 1.e4 e5 that went by before I actually got the chance to play it.) And it's an unhappy fact that too many of those long and complicated lines end in draws. Which to me, means it's an opening for professionals. Players who are not just in a position to learn large amounts of analysis (and are capable of doing so, and retaining it, and for that matter working on it and improving it) but who are happy to do so if a forced draw lies at the end of it.

But not at club level. You can play drawing lines and you can play highly-theoretical lines, but you don't really want to play something that's both. Nor do you want to play twenty moves of theory, and then find yourself lost almost straight away. Why not just cut out the twenty moves?

All too difficult on several fronts. Wrong opening for the wrong player. Never again.

It is always possible to use the Marshall move order as a means of provoking an anti-Marshall. The validity of this approach depends on the appetite for the anti-Marshall positions instead of main lines. What's fashionable in the anti-Marshall changes over time. Playing the immediate h3 is the current favourite.

I'd guess that Aronian is now the top all-time player who employs the Marshall (regularly).