We’re off. Again. Yes, the British Championships have come around once more. Hands up who thinks it feels like a year since Sheffield.

As usual, we’re going alter our normal schedule and post every day until North Shields finishes on the fifth of August. Today, to get things going, we’re going to revisit a ghost of ECF past and then take a look at a ghoulie that may come lumbering into view in the near future. We'll kick off the post, though, with this year's tournament. 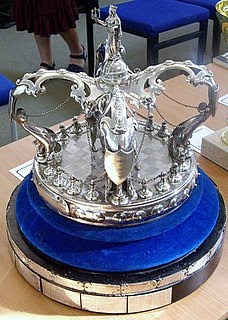 
I’ve seen it said that the absence of Adams, McShane and Short will make little difference and that the 2012 British will be just as much fun as ever. I understand that point of view, but still I find it impossible to agree.

For those playing in the festival it might well be true, but for spectators and for British chess in general, the non-appearance of the three highest-rated players in the country must inevitably detract from the Championship tournament. This is not to say that the events that took the big three to Sheffield should have been repeated and neither is it to cock a snook at this year’s top ten. After all seven grandmasters and three International Masters is hardly shabby. It's simply that while the Championship might well be as fascinating as it always was prior to 2011, it’s simply not going to hit last year’s heights.

On the upside, however, we can also be fairly confident that no damage will be done to English chess this time around. In considering the trade-off, I for one am prepared to count North Shields as a win. 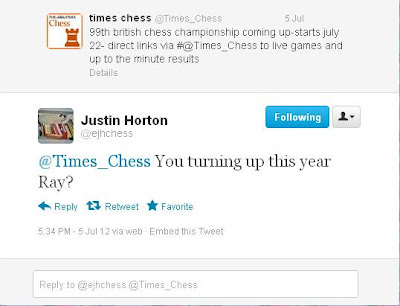 Let’s turn the clock back a year. For understandable reasons it was the end of the tournament that subsequently got most attention, but it shouldn’t be forgotten that the first of Sheffield’s surprises was Ray Keene turning up at the opening ceremony. It didn’t take long to emerge that Raymondo’s presence came as much of a shock to the English Chess Federation as it did to everybody else and although a carefully-worded statement followed it was entirely obvious that the President’s failure to discuss RDK’s visit with anybody else was anything but ‘Situation Normal’ as the ECF were trying to claim.

Back to the future and it’s still hard to see The Mysterious Appearance of Ray in any other way than exactly as it appeared at the time. Which is to say, it seems that at best CJ de Mooi acted as if he didn’t care what anybody else in the ECF thought and at worst the President deliberately withheld his plans from the board to avoid the possibility of anybody objecting. 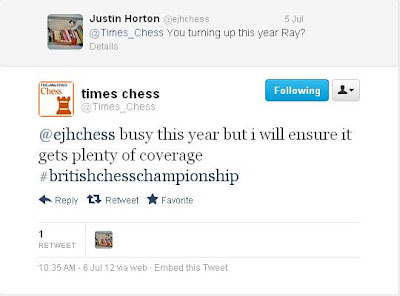 Some people have full schedules. Get over it.

So here we are once more. Another Round One at another British Championship, and once again the ECF finds itself being asked a rather fundamental question.

Alex McFarlane has noticed an interesting discrepancy with regard to the English Chess Federation’s involvement in the ill-fated FIDE law suit. The official line, Alex notes, was that


and yet, Alex says,

... the CAS report clearly states that part of the action taken by Georgia and the ECF was initiated on February 24th. (See Sec III para18)

It could be something, it could be nothing. It might just be a typo for all I know. Whatever the truth turns out to be, those who say that now is not the time to investigate (there’ll always somebody who’ll cry ‘too early’ just as there will always be those who’ll call ‘too long ago’ if you wait) or that this is a non-issue raised as part of a personal vendetta do our favourite game no favours at all. Alex’s questions as to what actually happened and in what order raise fundamental issues for the ECF. Exactly the ones that you might have hoped had already been resolved in the post-mortem to the various Sheffield debacles, in fact.

When it comes down to it, the question that English chess must answer is this: is the ECF an organisation that runs the game on a collective and open basis for the benefit of all of us, or is it the plaything of individual officers who are welcome to do whatever they might happen to feel like doing at any given moment? I’d like to believe that one day we'll get to the point where the stock response to suggestions that ECF officials are making private decisions on behalf of the organisation is simply, "Well, that's just not the way things happen in English chess." We're a long way from that, though. That is why, clerical error or not, the McFarlane question is an important one and that is why we shouldn’t wait until the British Championship is over before we give our answer. 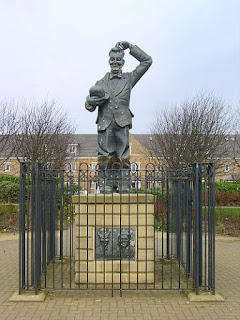 By the time you read this, some of the games in North Shields may have started. If anybody plays like I did in Wales, it’s entirely possible that some may even be finished. It would certainly be a great shame if this year’s tournament was overshadowed by chess politics, but I see no reason why it should be. In any event, we at the S&BC Blog feel that we can cover both and still find room for our memories of Penarth.

We’ll be back tomorrow with some advice as to what you can do if you ever find yourself stuck in the drizzle at the end of a pier. Let’s finish today, though, with a thought for all those who are pushing wood at the British today: whatever the event in which you’re taking part, I wish you all the very best of whatever it is that you call luck.

With regard to the ECF timeline,

The link that followed The ECF Board first discussed this matter at a meeting on 26th February 2011 was broken but it has now been fixed.