I had a particularly chessy summer in 2011. The Czech Open led into Dublin, but it was the Big Slick IM Norm event that kicked it all off, finishing on the Sunday of the Wimbledon final. The previous Tuesday, the venue in Croydon, not far from SW19, had some teething problems with their roofing and Round 4 was halted. It was Ladies' Quarter-Final day and you can read some weathered hyperbole about it here. 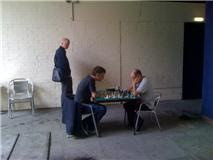 As you can see, Dave Ledger and Keith Arkell decided to continue playing outside. Everyone else either had a little break or tried to bail out the casino, with little success.

I'd survived the worst against Bob Eames but still had a scary position. 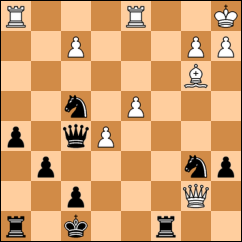 Obviously, there's nothing else. But playing such a ridiculous forced move after an hour's interruption took the edge off its psychological impact, especially given I'd mainly been worrying about the structural integrity of the playing hall. And I'm no architect.

The break had cleansed me of my negative mindset and deprived Bob of his positive one. He now erred with 26. e6? and my h pawn proved decisive shortly afterwards.


A heavy rain shower has altered many a sporting contest, from Interlagos 2008 to Donetsk 2012. But I bet it hasn't happened much in the world of international chess.


Ledger - Arkell photo by Simon Williams (www.gingergm.com)
Posted by PJM at 8:00 am

Didn't a heavy rainstorm cause play to interrupted at Baguio because it caused a power cut? Or am I hallucinating that?