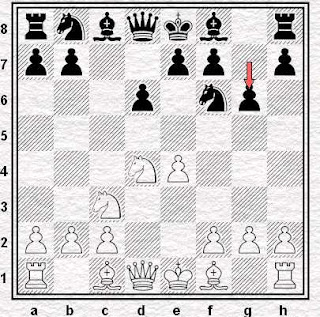 5 ... g6
Thomas Ernst was a big expert on the Dragon, but it was also in my repertoire, so I decided to play it anyway "to learn something". The main thing I learned was not to be naive.
Jacob Aagaard, Grandmaster Versus Amateur, (Quality Chess 2011)

Regular readers might have noticed that I'm rather partial to Jacob Aagaard quotes. It's no accident that two of the first nine SMAs (#4; #7) are his (another, #5, comes from one of Mr Vowels' books) and no surprise that last year's Grandmaster versus Amateur contains plenty more gems from the Aagaard keyboard.

The annotation I've chosen for SMA #10 refers to a chess opening, the Dragon variation, but it is the idea of chessic naivety that interests me most. Naivety, in this case, not relating to the beginning of the game but the very opposite end.

Endgame knowledge: retention and the subsequent use thereof. That is our theme for today. 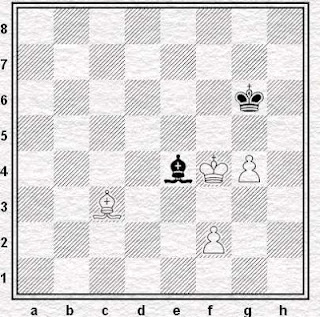 You may recognise this position as Mackle-Eggleston from the fifth round in North Shields. White has just played 55 Kf4 which, as it happens, turns a winning position into a draw, but what we're really interested in is what Black's about to do. Eggleston's choice, 55 ... Bc2, you see, is probably a mistake. Not because it hands the win back to White - according to Nalimov, it's still a draw after the bish goes to the second rank - but because Eggy is drifting away from the standard defensive plan.

As Tom Rendle explained, the bishop really belongs on the c8-h3 diagonal where it restricts White's king and the pawns all in one go. The king is tied to the g4 pawn and it's not possible to advance either pawn because f4-f5 allows Black to sacrifice his bishop and g4-g5 will lead to a blockade. Upshot: White can't make any progress and the game is drawn.


As it happens, I'm not able to watch the chess live at work and yet I can access the EC Forum. Normally this arrangement leaves me rather uncertain as to what precisely is going on, but when I saw Tom had written,

Mackle-Eggleston is a draw, it helps if Black knows the easiest way is to put the Bishop on c8 or d7 (which he hasn't done yet)

I was pretty sure that they must be playing out an ending that I'd seen in de la Villa.

I remembered that one of the 100 Endgames You Must Know involved a bishop attacking a couple of pawns from the front. I was entirely confident about that because I'd read the book from cover to cover last year. What I couldn't recall, naturally, was the actual position involved. I couldn't remember how far up the board the pawns were supposed to be and I didn't even know if it was an opposite-colour or same-colour bishop ending. They say that plans flow from the key features of a chess position, but there was I knowing full well what I wanted to do and trying to imagine which arrangement of pieces would allow the idea to make sense! 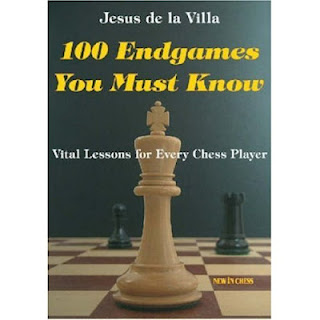 Back on the EC Forum the problem of remembering endgame theory cropped up. It often does - see also the first comment to a post I wrote last year about Queen vs Rook - although it seems to me that the "Will we/you/I remember?" question usually comes with the implicit assumption that you only look at something once. "Now we've seen it, in this game or in that Endings manual, will we remember it next time?"

When I was spending time with de la Villa I knew that I wouldn't remember much of what I was reading unless at some point in the future - points probably - I revised and reviewed what I was learning. I thought that this knowledge would in itself make sure that I actually did the follow-up work. I thought that I'd have a spare hour or two here and there and that I'd fill it by going over the old ground.

A rather naive view of life, that, isn't it? Usually, chessically speaking or otherwise, items on 'To Do' lists that don't have a deadline don't ever get done. There's always going to be something else that feels a bit more pressing.

"OK," I would tell myself, "I know I need to brush up on this stuff but it's not as if I need to do it right now. I'll do it tomorrow." And the next time I would say it all over again. 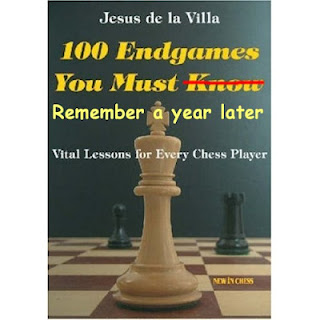 Mackle-Eggleston might well have taught me something about the kind of position where it is appropriate to attack two connected pawns from the front, but the main thing I learned from their game was not to be naive about the process of acquiring endgame skills.

It's the rest day in North Shields. Since there's no cricket, I think it's time I got down to some endgame work.

I have been using spaced repetition for a few years now to memorize openings. In the last year I've also begun to add positions from Rosen's Chess Endgame Training. I don't think I can yet point to a specific example where it has paid off, but I certainly do feel like I have retained some basic knowledge better than I have in the past.

What is "spaced repetition"?

I was going to attempt to explain this, but I'm only vaguely familiar with it myself. Wikipedia is probably easier.

Spaced is how I feel after trying to follow that...