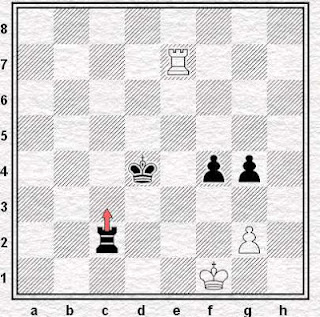 59 ... Rc3
This is the privilege of the attacking player in these situations. Before trying his main winning try, Miles first goes around in circles, giving his opponent maximum opportunity to go wrong.
John Emms, The Survival Guide to Rook Endings (Everyman Chess, 1999)

It's the nature of these two-week long tournaments. At the start they feel like they're going to last forever and yet, before you know it, they're almost half over.

Congratulations to The Corporal for racing into the lead. Currently it's four out of four for Jonesy with James Holland half a point back and Gordon, Gormally, Howell, Osbourne, Turner, Hawkins, Arkell, Hanley (CA), Harvey, Hanley (JL), Jackson and Foo the roll call of those with three points each.

As it happens, of all the games in North Shields so far it was one played by the last of that list - Foo I mean, not Grub - that really caught my eye. Other than the fact that, like many juniors, his elo rating bears little relation to his ecf grade, I can't say I know too much about the lad, but he's certainly begun the tournament like he means business. Unbeaten and third equal after four rounds? That's not a bad start for anybody, let alone a fourteen-year-old.

Actually, it wasn't so much the whole of Foo-Houska that I liked. Really it's the ending that stands out for me. The queenside pawns got cleaned up at move 60 and not an awful lot changed until Jovanka faced losing her extra pawn on her 130th turn. At this point the players agreed a draw, much to the chagrin of those amongst us who thought we'd been gifted another fifty moves of rook and pawn ecstasy. 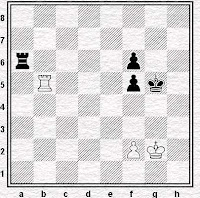 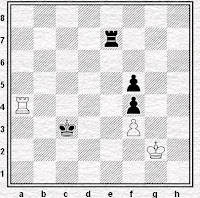 This sort of thing tends not to go down very well with some chessers, but I see no reason at all why Black shouldn't play on and on on if she wants to. OK, she's not really going to win White's pawn and even if she did, she's still not going to win the game. Nalimov assures me that you can remove the f2 pawn from the start position and objectively White is still quite safe, but why not keep going anyway? One feels that Jacob Aagaard (SMA#4) would probably agree. 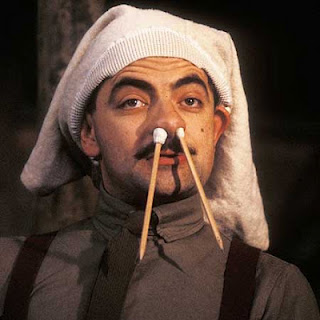 Seventy moves were played, but Houska's pawns advanced no further than an asthmatic ant with some heavy shopping

Which brings us to the ninth of our Sixty Memorable Annotations. I've used Emms because a rook and pawn ending seemed the most appropriate, but I could just as easily have gone for this position 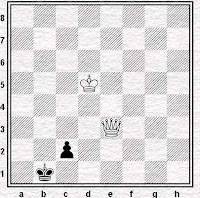 White to play
and de la Villa's observation that,

... it is a draw, but there are a couple of tricks worth knowing. If the white player is an expert, he will very likely try to take us to the critical position after going round and round.

There's something here about many stronger players being willing to go to any lengths to squeeze out an extra half-point, but that's not really our moral for today. More it's the principle that when the game is theoretically drawn the defender is likely find a 'going around the houses' approach trickier to handle than the attacker coming at him or her head on.

Think about Foo's situation. The defence looks straightforward enough when you click through the moves, but I'm sure it feels a little different when you're sitting at a board and have to play it for real. Perhaps you've been playing for five or six hours already. Perhaps you're down to thirty-second increments. Perhaps you're feeling the tension of the prospect of a good result against a higher-rated opponent. Perhaps you're battling against the feeling that the draw is in the bag and you can play anything and still not lose. Perhaps you know full well that the draw is in reach, but you're not going to be given it yet and meanwhile there's a little voice in the back of your head saying "careful you don't throw this away, careful you don't throw this away". Perhaps you're getting cross because the position is dead but your opponent won't accept it.

Playing on and on starts to look quite sensible doesn't it? It's not just keeping on trying to win but actually increasing your chances of winning by ratcheting up the pressure (or boredom, at least).

I know Foo-Houska isn't quite the same as Matulovic - Miles or de la Villa's queen v pawn position, but is it an ending of unnecessary moves? No, I don't think so. It was just Jovanka going around and around in circles - which is her privilege in this kind of situation.

There is also the alternative point that if you play on unnecessarily, particularly against a player who one day might be stronger than you, that next time you meet they return the compliment.

True Nonny, but the point here I think as that many chessers' definition of 'unnecessarily' is way too restrictive.

I don't think Houska played on too long here. If she ends up with the boot on Foo's foot at some point in the future then good

This reminds me of the end to a game Mortazavi - Mack in the Times school ch (back to the 80s here). Andy, as Black, had the drawn ending you give: pawn on f2 and king on g2. Ali (White) had the queen on e2 but his king miles away. So, 1...Kg1 and it's still a draw. But Ali had been playing this on for some time already (actually he hadn't even known that it was a book draw!); and Andy, as though to make his point in humorous fashion, played 1...Kh1 instead. And then 2.Qf1+ 1-0 !!

Before trying his main winning try

the Times school ch (back to the 80s here)

Two things occurred to me today that I forgot to include in the post.

First: me having knight v rook in the last round at a Golders Green rapidplay several years ago. I knew it was drawn, of course, but I had no idea how or what I was supposed to do. In finally drew it when I forked his king and rook but knowing that I had a draw almost in my grasp but never being able to actually finish the game off was pretty stressful - which in itself is a good reason for the attacker to carry on.

Second, Jonathan's comment about Queen v pawn on the 7th reminded me that on the first volume of Nick Pert's Killer Endgames includes the end of Nick Pert v Jonathan Rogers, British Championship 2006.

Pert not only played on with queen against rook pawn on the 7th with his own king nowhere, he even allowed Black to Queen and tried (for just a move or two) to win KQ v KQ. Hopelessly drawn of course, but he still tried.

I guess Jonathan is in an ideal place to say what it's like defending a 'dead' position at a British Championship.

I don't quite agree with this. I don't think the position involved is quite the same as QvP or RvN. We're not talking about a theoretical draw, but plenty of chances of slipping up, we're talking about no meaningful chances of winning.

It's impossible to draw lines in situations like this (or maybe any similar situation, since you're dealing with rules that are not only unwritten but unagreed) but personally I think if somebody went on that long against me in that situation I might dispense with the handshake at the end.

I had no idea that Nick mentioned the game in hid DVD! But his king was not miles away - had it been one squarer closer, I would have promoted my a-pawn and then be mated. So we were both double-checking things a bit. (Sixth or seventh hour, and all that).

So his message was perhaps meant to be "check it out and play it out if you are better - if you just agree the draw you may find you have missed a rare opportunity".

Generally, I would say - chess is a very complicated game and so even when we speak of "simple" positions we tend to speak in relative terms. It's simpler than move 15 in a sharp sicilian perhaps, but still ...! The fact that top players can fail to win K + Q v K + R shows you just how relative the term "simple" is in chess.

And as for the fact that the most simple looking positions can be among the most difficult to play precisely, I refer you to your own Penarth Pier ending.