It's tempting to simply shake our heads, leave it there, and walk on. However, let's give David Caddle - for it was he - a chance. What could he mean?

Quite true. I gave Simon Barnes a similar benefit of the doubt in an earlier instalment.

2. Chess is run by people whose primary interest is money 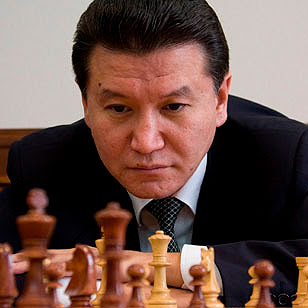 While I doubt Kirsan is out every lunchtime with his FIDE cronies drinking gin and eating churros, his disregard for the integrity of his activities is lamentable.

3. Chess can be damn complicated

Yes. I would suggest that chess is able to discombobulate the average person as much as the markets can.

4. In chess, even the best players choose the wrong strategy

Chess similes in a sporting context tend to mean little, but are otherwise harmless. If anything, trivialising the economy in this way highlights just how much the fortunes of billions are affected by the decisions of a few.

Take care when comparing things to chess. I might just overanalyse the crap out of them.

If the economy hasn't just twatted up a simple bishop ending, then it isn't like chess at all. Isn't like *my* chess that is.

- We could sacrifice the Queen if it meant the economy wins.

- The economy is controlled by Bishops from a long distance.

- The economy would be be OK if it wasn't for the government's continual unsound sacrifices.

Actually I doubt that Kirsan's primary motivation is money. Power is his drug, I think.

Do the two not equate?

Often, but they're psychologically different motivations.