What are buildings with the people gone?

Hurrah! The Grand Prix is coming to London. Or such was the feeling after the announcement was made* confirming the rumours that had been around for some time, that the leg scheduled for Chelyabinsk would, after a dispute with the organisers there, be moved to London instead.

That's the Immortal Game, as I am sure Ray knows, not that he's responsible for the typing. (Besides, these things are rushed out and sometimes typos happen: similarly, in "one of the world's most respected commentators on the sport" they may have forgotten to add the "dis".)

But let us not dwell on that, nor on the magnificence of


the Grand Prix in September represents the start of a long journey to restore chess to its rightful place in the public imagination after decades in the media wilderness.

or not for any longer than it takes to ask "how can something 'return' to where it's never been?"

Nor let us trouble ourselves too much with this

- at least, not beyond wondering whether we can actually find references to Simpson's as the "home of chess" soon after 1828, as opposed to soon after Ray started dining there - and noting that it's copied directly from Simpson's own website. 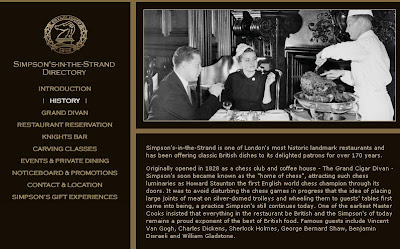 Nor let us even be too sceptical of Andrew Paulson's claim


possibly the best-known chess venue in the world

No, let us get to the meat of the thing, which hunk of meat is quite a large one, yet one which seems to have escaped people's notice for a few days after the announcement. Let us turn back to Mr Paulson:

As possibly the best-known chess venue in the world, it is the perfect place to kick off the new Championship cycle. However, the requirement to transfer the event to London from Chelyabinsk at this relatively late stage means that it will be a smaller, invite-only event.


it will be a smaller, invite-only event.

Yes, it's not an Open, we knew that, all the players are invited, or qualified, or....

...you mean you're not talking about the players? 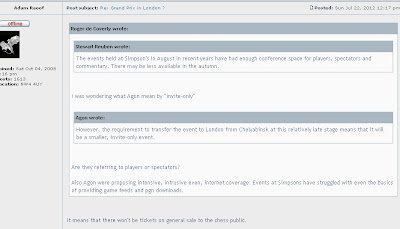 It means there won't be tickets on general sale to the chess public.

The London chess-playing public can't actually get in to see the chess? Then why in the name of God are they supposed to be pleased about the event being in London?

Sorry, could I look at that spiel from Paulson again? 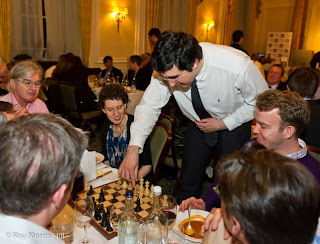 Where you won't be

I say "nobody can get in to see it". Actually I will hazard a guess that among the very few who will be able to get in to this "invite-only" event will be Andrew Paulson, Ray Keene and CJ de Mooi.

So there we have it. Although it does not have us.

Now I am not such a fool as to not understand that sometimes things happen and that venues obtained at short notice are often very less than ideal. However, if there were any indication that this matters a good damn to anybody, I'd hope to see it noted rather more regretfully in the press releases, i.e. rather more "we're really sorry that the public can't get in this time, we very much hope this won't happen again" and rather less "it is the perfect place".

entails an implict "and these ambitions do not include access for the chess-playing public".

And truly, there is something deeply objectionable about

which begins by excluding that public.


[* On 17 July, I think: I was travelling and only caught up with the news a bit later]
[Simpson's/Kramnik image: whychess.org]
[Ray Keene index]
[CJ index]
Posted by ejh at 7:55 am

It isn't known how many of the ECF Directors will be seeking re-election in October. Is it possible that invitations to be a spectator at Simpsons will be offered as incentives for support of established candidates? Not all ECF Council delegates, Congress ones in particular are accountable to anyone for their actions.

But a serious own goal in trying to make chess spectator friendly.