[Author's note: This post was written before Phil's interview with Gawain appeared yesterday. Save for the closing paragraphs, it remains pretty much as originally intended.] 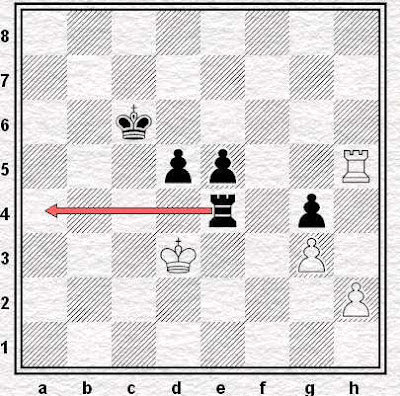 "The dice fell my way". That was how Gawain Jones tweeted his Championship win.

In the circumstances he could hardly have said otherwise, could he? If you win something and don't make some kind of reference to your luck then, regardless of the circumstances, you risk coming across as rather too impressed with yourself. Winning after tossing your queen in? You'd have to turn self-absorption up to eleven not to acknowledge that you'd been fortunate after that.

It's what we say because social convention demands it, but is it the truth? Is it the whole story? I'm not convinced. Things aren't always so out-of-the-blue random as they first appear and one of my games from Penarth, in which my near 2000 Elo-rated opponent dropped a pawn for no readily apparent reason, shows why. 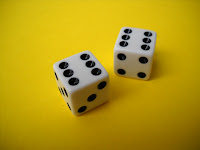 The position at the top of today's blog comes from my seventh round game in Penarth. White - your humble scribe - is obviously in some danger here, or would have been had Black not played 52 ... Ra4.

In the month since the game was played I've often thought about this position and how my opponent came to play as he did. Possibly he thought he was swapping e5 for my pawn on h2, overlooking that 53 Rxe5 Ra3+ doesn't force my king to the second rank allowing 54 ... Ra2+ and 55 ... Rxh2 because with the e-pawn gone d4 becomes available as an escape route. Maybe. Or maybe he simply forgot the rook was defending the pawn.

Whatever the reason, it's easy to see ... Ra4 as nothing other than an unforced error, as something I simply benefited from without contributing to in any way, as something I was lucky to get. That's how it looks, I know, but I think it's possible to explain the apparently inexplicable, at least in part.

Let's leave aside the fact that we were a few minutes short of five hours into the playing session when my opponent blundered and he might simply have been tired. Similarly, we'll ignore the issue of whether a chesser who prefers to open with the King's Gambit is likely to find a rook ending entirely to his taste. Both of these things contributed to 52 ... Ra4, no doubt, but the factor I'm really interested in today is rather neatly summed up by a paragraph in John Shaw's chapter in Grandmaster versus Amateur.

One of my favourite books is Rook Endings by Smyslov and Levenfish. I have read it from cover to cover several times, so whenever I reach a rook ending I feel I am on home territory; nothing bad can happen to me here. No doubt my confidence is excessive, but I do score well when I reach a technical position. 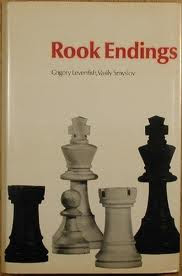 My feelings during the game were rather similar to Shaw's. I've not read Smyslov and Levenfish (yet), but over the last year or so I have spent a fair amount of time brushing up my rook endings. The one in Penarth was obviously rather unpleasant for me - when it began I was a pawn down and had a passive rook - but not for one second did I think I would lose it*. I was convinced that somehow it would work out for me.

Like Shaw I was ludicrously over-confident, but I don't think that hurt me at all. If anything, my absurd positivity was even more helpful than justified optimism would have been.

Do you remember the third World Championship play-off game where Boris Gelfand made his own inexplicable error in a rook ending? Vishy Anand's post-match comments are revealing.

I was extremely surprised by Rh7, because somehow I was hallucinating that I was getting a Vancura. So I found it very funny that you had the same thought, at least from your question to Boris. In fact when I got back to the room, I told the guys. They said: "Nice escape!" and I said "Well, but I'm getting a Vancura," and they said: "No, you're not, you're not getting anything remotely, you're getting a Vancura like three tempi down, forget about it." Only later, when I got back to the hotel, I realized how lucky I'd been. It again strikes me that sometimes, even if you're deluded, it can give you confidence and confidence is the most useful thing in chess.

Precisely how staying confident and positive helps when you're deep in the mire is worth a post or two in itself, I think. Is it that the opponent picks up on body-language cues and unconsciously downgrades his evaluation of the position? Is it simply that positive thoughts stop you from throwing in the towel and keep you playing long enough to give the other guy a chance to make a blunder? Your guess is probably better than mine.

I've no idea how it works, but I'm convinced that it does. There's a direct link between my absolute certainty that I wasn't going to lose and my opponent's blunder on move 52. Not a causal relationship, perhaps, but a connection. I'm 100% sure of that. 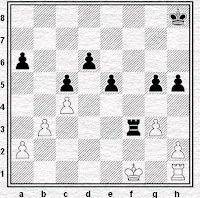 Back to Gawain Jones and the British Championship. Reading what he had to say about how his feelings after his monumental blunder in that first play-off game I'm struck by how full of self-belief he sounds.

He's just played what must have been one of the worst moves of his life and yet his conviction that he can actually play the game isn't shaken in the slightest. Can he put up a fight even though he's a queen down? Yes he can. Can he win the Armageddon game? For sure he can - and note, by the way, the implicit assumption that he would win the second game to take the play-off to the decider.

By itself it's not enough to explain Jones' success. Gordon fought hard too turning down a draw in an appalling position in game 2, after all. So, no, Jones' mental toughness wasn't sufficient, but it was absolutely necessary and Gordon's meltdown in game 1 wouldn't have happened without it.

That's why the idea of victory through random good fortune doesn't sit comfortably with me. It's too trite, too easy an explanation. If we really want to get at what happened up in North Shields we've got to understand the emotional resilience of the man who became champion and grasp the fundamental truth that while they could easily have fallen a different way, Jones was rolling dice that he had loaded in his favour.

* I was worried for a moment later in the game, but that's another story.

Book cover
Dice
Posted by Jonathan B at 8:00 am