From that Caissic authority, Shirley Robertson.


"Ben [Ainslie] is the best in the world at executing in a medal-race scenario. He's a world champion match-racer, so he knows all the moves, all the tactics. Match-racing is about quick thinking, planning three steps ahead. It's like a game of chess. Jonas's speed has been impressive this week but it's a small course and he won't get a chance to stretch his legs." 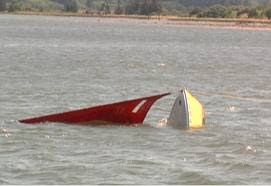 Too many mixed metaphors sunk this ship


She's not the only one at it.

Not sure I care much for "executing in", either.

I think this might be right. I had sailing lessons once. I thought I understood the rules and began well, then I'd start to daydream and have to take emergency measures to avoid disasters like running aground. I could describe many of my chess games similarly.

There might be a valid comparison here. With sailing being a race, there must be circumstances where you take an early lead and nurse it to victory. In chess terms, you gain an advantage early on and exploit it to victory. The stronger the player, the less likely they are to misplay their advantage. The other point they may be referring to is that sailing is often not one on one, but a series of races where the best overall performer wins. So if you are in overall first, you need to finish ahead, or not to far behind the team in overall second.