Cycling is big in Astana, as witness the professional racing team bearing the same name that takes part in the Tour de France and other big races. "The Astana team of a few years back is exemplary for how things are done in Kazakhstan," said the country's strongest grandmaster Murtas Kazhgaleyev. "They had Alberto Contador, Lance Armstrong, Levi Leipheimer and Andreas Klöden all together in one team! When we do things, we want to do it the best way possible".

Thus writes Peter Doggers on page 50 (or page 48 if you believe the contents pages) of the current New In Chess, in his piece Sasha & Seryozha up to speed about the 2012 Rapid and Blitz World Championships in Astana, Kazakhstan.

As it happens I read Peter's article just a few days after Alexandr Vinokourov won gold in the men's Olympic road race, after which triumph his past as a doper, while riding for the team, Astana, who are eulogised above, was the subject of a certain amount of discussion.

I don't know if Peter glanced at Astana's Wikipedia page before he chose to make Kazhgaleyev's optimistic claims the subject of his next-to-opening paragraph. Wikipedia is not of course to be considered reliable at all times and in all respects: but with respect to Astana, it might be a touch more reliable than an unverified Murtas Kazhgaleyev.

For the record, it's true that Astana did, indeed, have these four cyclists (and other very fine riders too) together in their team, during which period Alberto Contador won the 2009 Tour De France. How long did it last? It lasted, to be generous, for one season.

There were a number of reasons for this. One was that Contador, who had joined Astana only the year before, wasn't delighted to have Armstrong on board: and once Armstrong was, they didn't get on. Even while they were winning the Tour, it was announced that the team would break up: in fact practically the whole team left. If this was "the best way possible" to do things, it wasn't obviously so to all the riders. 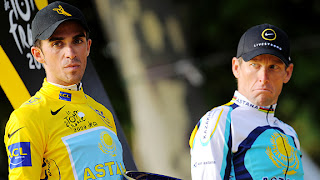 Contador and Armstrong: there was a lot of needle

It didn't take the Armstrong-Contador conflict to make that point. The riders spent much of the first half of 2009 not being properly paid, to the extent that they rode part of the Giro d'Italia with several sponsors' logos obscured on their shirts, these being sponsors who hadn't paid money they were contracted to pay. It may be that not paying your employees properly is "how things are done in Kazakhstan", but it is not, to my mind, "the best way possible" to do things. Possibly the thesis could be tested, by failing to pay Murtas Kazhgalayev. Or Peter Doggers. 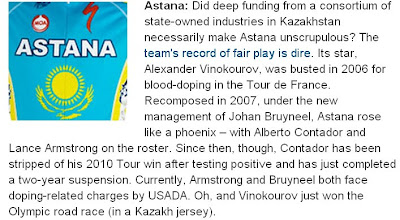 The Guardian helps Peter out

Astana had been barred from the 2008 Tour de France following positive dope tests in 2007 for a large proportion of their riders, a less-than-exemplary approach to the sport and one that brought Vinokourov a two-year suspension - the reason why he was missing from Kazhgalayev's list. It's true that everybody involved was sacked (though the team weren't so disenchanted with Vinokourov that they didn't bring him back as soon as they could) but it's also true that most of their replacements were people who previously or subsequently have found themselves in similar trouble. Armstrong is presently suspended from cycling as a result of doping allegations. So is Contador, whose 2010 Tour de France title has been stripped from him. Nor was his 2009 ride free from suspicion.

How would you sum that up? You could sum it up by saying that Astana had one season with a group of top riders and in that season, they won the Tour de France. You could, if you wanted to leave out most of the important bits. Or you could sum it up by saying that a team with a long record of cheating hired some top riders and other staff, nearly all of them with chequered records, then failed to pay them properly, suffered a number of internal disputes and shortly saw the team, for several reasons, break up almost as soon as it had been assembled.

Would I describe that as "exemplary"? Probably not. Or "the best way possible"? Not likely. At any rate it looks to me like a rather less perfect experience than Mr Kazhgaleyev would have us believe.

But you know, if somebody made that claim to me in the first place, I hope I'd check it out, before recycling it to readers, just in case it didn't stand up to scrutiny.

Anything else, it seems to me, would be less than exemplary.

[Astana image via Taringa]
[Kazhgalayev image via Echesspedia]
Posted by ejh at 7:55 am

Alberto Contador is not 'presently suspended'. He's currently second in the Vuelta a España.

This is true: this post was originally written some time ago (between the last NiC but before La Vuelta started, and for that matter before the appearance of the Guardian piece) at which time I believe the suspension was still in force. But I stand to be corrected.

It would be churlish of me not to add that I did actually see a chap in a Team Astana top in the Tourist Information Office at Holt a couple of days ago.

Thanks for mentioning my article! I'm glad that it's important enough to be dealt with here, where there's enough space to write about cycling, unlike in New in Chess Magazine.

I struggle a bit to see the point of this piece. Sports cycling is big in Kazakhstan, as mentioned by the country's top GM in a quote to a chess magazine. It's just background to a description of a chess tournament, written presumably before the USADA v Armstrong announcements.

. I'm not sure if the typos in the first quote were in my text

I struggle a bit to see the point of this piece.

I din't believe that there's any date on which this piece could have been written when it was true that both Armstrong and Contador were 'presently suspended'.

It's a meaningless quibble, of course, but that seems to be in the spirit of things.

I dunno. If I were putting together a snarky article about a writer not doing as much research as I'd like... I hope I'd fact check it.

I din't believe that there's any date on which this piece could have been written when it was true that both Armstrong and Contador were 'presently suspended'.