In last Saturday's blog we delved into the life of the surgeon William Tuckwell, the driving force behind the Brasen Nose Chess Club and its first president.

Tuckwell was one of six founder members who, some time in late 1809 or very early in 1810, got together to create the club. The others were Ashurst Turner Gilbert, Richard Stephens, Kenrick Prescot, John Lingard and a Mr Allen who was probably John Taylor Allen. Two further members were elected soon after: Samuel Hall in January and Ambrose Dawson the following month. Joining the club was no shoo-in: applicants for membership had to put themselves up for ballot, one black ball being sufficient, the rules tell us, ‘to decide the question against a candidate’.

The election of Hall and Dawson brought the total membership to eight, the maximum number allowed by the rules. Why only eight? The reason is ‘obvious’, we are told, ‘since at chess there are eight pieces – so in every chess club there should be only eight members – thus every man has his piece’.

Not immediately obvious to me though. But then I remembered that, as a Wikipedia entry puts it, ‘in play, the term [‘piece’] is usually used to exclude pawns, referring only to a queen, rook, bishop, knight, or king’ with the general term for pawn being ‘man’ or ‘chessman’ rather than ‘piece’. So, eight members of the chess club because there are eight chess pieces lined up on the first rank. Eight does seem to be an unnecessarily restrictive maximum for a chess club and I don’t think we’ll be applying such a policy any time soon at Streatham & Brixton Chess Club (how would we break the news to the other 48 members?).

Apart from William Tuckwell, all the members of the chess club were Brasenose men, and all went on to become clergymen, the most eminent of whom was Ashhurst Turner Gilbert, who has a Wikipedia entry here. Gilbert’s 1870 obituary in The Times records that while at he struck up an acquaintance with Robert Peel and they became lifelong friends. Gilbert was taking his MA degree at the time of the chess club and for several years he was a tutor at the college before being appointed principal in 1822. He was vice-chancellor of the university for a four-year term in 1836-40 and then became bishop of Chichester in 1842, no doubt with the approval of the prime minister of the day, none other than his old mate Robert, by then Sir Robert, Peel. 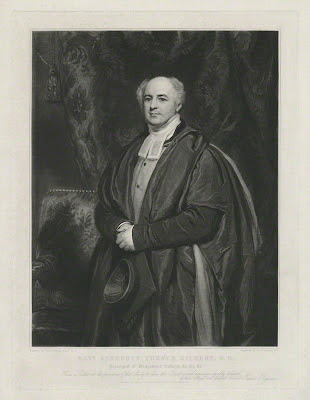 Brasenose College had strong affiliations with the North West of England, and Gilbert was one of three members of the chess club who had attended Manchester Grammar School, the others being Samuel Hall and John Lingard.

Samuel Hall graduated from Brasenose in 1809 with a first class degree and was elected to a fellowship in 1811. The Admission Register of the records that he was employed for many years in the tuition of the students of the college, and for seven successive years was vice principal. He had something of a reputation for conviviality and is mentioned in one of the satirical Brasenose Ale verses, which were written each year and recited on Shrove Tuesday (a custom which continues to this day). In 1819 he became one of the domestic chaplains to the Duke of Clarence, subsequently William IV, and in 1831 he was appointed rector of Middleton Cheney, near Banbury, a post which he held for 22 years until his death in 1853 at the age of 66.

John Lingard, son of a attorney, had gone up to Brasenose on a scholarship and in 1810 was studying for his MA. Shortly before his early death in 1832 he was appointed curate of St Michael’s church in by another old boy of the Brasen Nose Chess Club, Ambrose Dawson.

was also a young Brasenose graduate in 1810, and went on to obtain his Bachelor of Divinity in 1819, the same year as his chess mate Ashurst Turner Gilbert. In 1816 he was one of two ministers recruited to the newly-built (but now demolished) of ’s in , , the city of his birth, where he remained until his death in 1848.

William Tuckwell held his post as president of the chess club for only one year, stepping aside at the club’s in February 2011 in favour of Richard Stephens, another Brasenose scholar-turned-cleric. Tuckwell’s short tenure of office may have been a consequence of the in-fighting which by then had broken our amongst the club members (of which more in next Saturday's blog). Richard Stephens was a vice principal of Brasenose before becoming vicar of Belgrave near in 1824 where he remained until his death around 1870.

Charles Kenrick Prescot (1786-1875) took his MA at Brasenose in 1810 and succeeded his father as rector of Stockport in in 1820 where he remained for the rest of his life.

The identity of the last of the eight full members of the chess club, named only in the minute book as ‘Mr Allen’, was a puzzle until I noticed that one of the minutes bears the initials ‘JTA’. This means he is probably John Taylor Allen (1784-1861), son of James Allen, a hatter and hose manufacturer of , who matriculated at Brasenose in 1801 at the age of just 17. He was ordained deacon in 1811 and priest the following year, then had a spell as librarian at Chetham’s Library in between 1812 and 1821, as this biographical note on the library’s website tells us. He then resumed his clerical career, becoming vicar of Stradbroke in where he served for 20 years until his death in 1861.

By 1810 Allen had already made something of a name for himself for his essay on the subject of duelling, published as Duelling: An Essay Read In the Theatre, at Oxford, 10 June 1807, for which he was awarded a Chancellor's Prize. 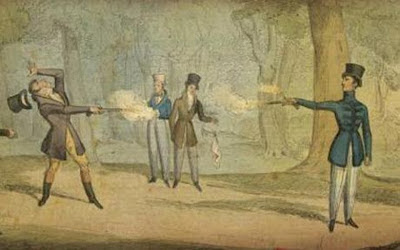 Victorian gentlemen settling their differences at the drop of a handkerchief.

According to Stephen Banks in A Polite Exchange of Bullets: The Duel and the English Gentleman, 1750-1850, Allen's essay was an early and influential outline of the arguments against duelling.


A ninth, ‘honorary’ member was added during 1810 after someone had the bright idea of appointing a poet laureate. I’ll have more to say about Thomas Dunbar and the commemorative poem he wrote for the club in a fortnight’s time.

Next Saturday: how it all went pear-shaped.

Links to the 2 previous episodes can be found here.
Posted by richardT at 11:00 am