For this, the second in a series of six blogs about the earliest known provincial chess club in , we start with this picture of in the early 19th century: 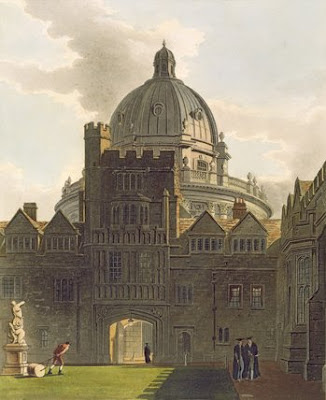 A view of the Quad (or Old Quad as it is now called) at ,
looking towards the gate tower with the Radcliffe Camera in the background.
From R Ackermann’s History of Oxford published in 1814.


The view of the quad is much the same today as it would have been to the members of the Brasen Nose Chess Club, except that the statue of Samson Slaying a Philistine shown in Ackermann’s view has long since gone. Most of the members of the chess club occupied rooms around the quad, and it was in those rooms that the chess club met each Thursday between January 1810 and April 1811.

At that time Brasenose was one of the wealthiest colleges. According to the history page of the college’s website, it was widely perceived as a place where the sons of gentlemen (there were no women at Brasenose in those days) got a little education and a lot of horse racing and fox hunting. Posh boys, you might be thinking.

It’s all very different today of course. Err, hang on though... that posh boy prime minister, David Cameron, wasn’t he at Brasenose? Indeed he was, though he preferred tennis to the turf and must have put in some serious studying because he came away with a first class degree. That’s something he shares with the chess players of 1810 – they were serious students too and achieved some of the best academic results of their generation. 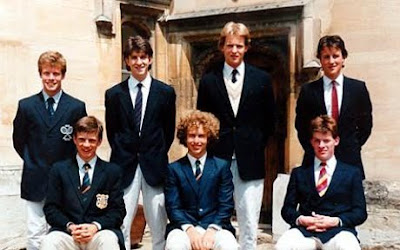 A talent for tennis perhaps, but apparently not chess.
David Cameron (standing on the right) represented at tennis as an undergraduate during the 1980s. Last year he described EU treaty negotiations as ‘like playing chess against 26 different people, rather than just one person’ and added ‘I am not very good at chess anyway’.

The young gentlemen who were members of the Brasen Nose Chess Club had much in common. All were from comfortable backgrounds; most came from the ; all were in their mid-20s; and all except one were postgraduates studying at .

The exception was the founder himself, William Tuckwell. He was a young surgeon who had recently moved to . According to Philip Sergeant in A Century of British Chess, he was a ‘good’ chess player and had taken lessons from ‘the great J H Sarratt, whose fee was a guinea a lesson’. There are some games of Jacob Henry Sarratt (1772-1819) here on the chessgames.com website and they are certainly worth a look, especially if you are brave enough to play the Muzio variation of the King’s Gambit.

Here’s a lively example, played appropriately in 1810, the year of the Brasen Nose Chess Club. No doubt the club members relished such swashbuckling chess and maybe even played through this game.

Sarratt was one of the pre-eminent players of the time and is credited with introducing into the rule that stalemate is a draw. It’s a rule we take for granted today, but before Sarratt’s time the treatment of stalemate varied widely. According to this Wikipedia entry, stalemate could be deemed a win or a loss for the stalemating player, an illegal move, or penalised by the stalemated player missing a turn. Sarratt was also a chess author, and the members of the Brasen Nose Chess Club may have been familiar with his Treatise on the Game of Chess, which had been published two years earlier in 1808.

William Tuckwell may have been rather better at chess than just ‘good’. If his son’s account is to be believed, he was ‘famed for his excellence’ at the game, as well as being one of the best piquet and whist players in . An hospitals website gives us some biographies of eminent past surgeons and Tuckwell merits a lengthy entry all to himself, from which we learn that he had come to at the age of 23 in 1808 and the following year was elected Surgeon to the Radcliffe Infirmary. 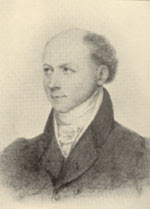 Tuckwell was, according to his son’s not-altogether-reliable account, the leading surgeon for a thirty-year period from 1815 until his death in 1845, a claim some other surgeons of the period might contest. He was something of an eccentric. ‘In costume and demeanour he was a survival from the more picturesque and ceremonious past. He pervaded Oxford in a claret-coloured tailcoat, with velvet collar, canary waistcoat with gilt buttons, light brown trousers, two immense white cravats propping and partly covering the chin, a massive well-brushed beaver hat.’ Apparently ‘one of the cleverest surgeons of his day’, he was also a friend to the poor: ‘During the thirty years of his celebrity his doors stood open for the first two hours of every over-busy day to the poor who chose to come, and who streamed in from the country round to be tended without a fee.’


But what was a surgeon, who was not a member of Brasenose, doing setting up a chess club at the college? We don’t know the answer to that, but perhaps he knew some chess players at Brasenose and took it on himself to get a chess club up and running.

Next Saturday: the other members of the Brasen Nose Chess Club.

Part 1: Those delightful symposiasts.
History Index
Posted by richardT at 11:00 am

Fact: I experienced the worst hangover of my life while in the building in the background in the top picture. This would have been, I think, in Cameron's first year. I have no reason to believe we ever met.

Sarratt's treatise on chess was entitled in some editions Sarratt on Chess. The name Sarratt comes from a Hertfordshire village which coincidentally lies close to the River Chess. Sadly, I can't find any evidence that it's ever been known as Sarratt on Chess.

You've reminded me Richard (J) of the many times that I have rambled over there in the Chilterns, around Sarratt and the valley of its local trout stream. Perhaps there's a post in it: "A Streatham Chess Stroll".