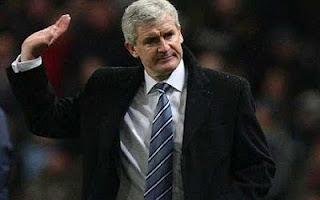 Who was Southampton's most pointless signing ever?


Mark Hughes: manager of Fulham [he isn't - see comments: JMGB], known as 'Sparky' to those who fondly remember his playing career, known as 'Mark Hughes' to me. A week or two ago he was also a man whose views on handshakes featured prominently on the sports pages. This was back when Ferdinand and Terry were the new Cheparinov and Short. (Last Sunday Suarez and Evra had a shot at becoming the new Ferdinand and Terry, but instead they chose to touch gloves)

Hughes, clearly annoyed at the way 'Handshakegate' overshadows such an important match, is still swimming against the tide in seeking to have such etiquette abandoned


Henry Winter wrote when pontificating on the subject of pre-game handshakes between professional footballers in The Telegraph.

Hughes believes that respect between adversaries can be earned only during the 90 minutes not in some staged ceremony beforehand. 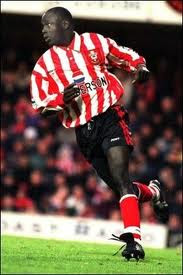 Ali Dia: played once for Southampton.
Came on as a sub for 53 minutes and then got taken off himself.
Still less annoying than Mark Hughes.


You know, the fact that he was one the least effective strikers that Southampton ever signed notwithstanding*, I pretty much agree with Hughes on this one. Handshakes after the game are all very well, but before? "Stop fraternising and get stuck into them, you pansies" is pretty much my attitude.

So why do I feel different when it comes to chess?

Let's cut 500 words of explanation and get right to it: it's coz it is different innit. Yes, in any other circumstance the first thing I'd do on meeting Mark Hughes would be to ask him for a refund of that portion of my season ticket
money that went to paying his wages. In the unlikely event of us ever meeting at the chessboard, though, it would be to offer a handshake.

PS:
That Ali Dia pic is internet-generic so providing a specific link seems a little silly, but I got the Hughes one from here and Bob and Boris from here

* I'd put him at least equal if not above David Speedie, Kerry Dixon, Augustin Delgado and Ali flippin Dia on that particular list.
Posted by Jonathan B at 8:00 am

it's coz it is different innit

Isn't this because football is a team sport and chess an individual one?

In the interest of accuracy, Hughes is manager of Q.P.R. Fulham's manager is Martin Jol.

thank you Freddie F. File that one in the increasingly bulging folder marked "Mistakes that I know are mistakes and yet I make them anyway."

I'll add a note to the text.