Funny how things turn out 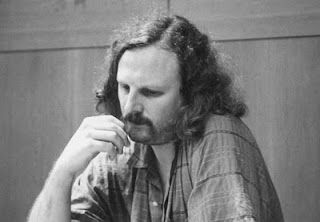 Long-haired opponents are the most dangerous. They always want to attack, and they know the openings well. - Vlastmil Hort, 1975

I wrote about Tony Miles just the other day. Just the week before, when I was composing the piece, I went to get my hair cut, at New Joan's in Huesca. I'm doing the same this morning, as it happens.

On the wall of the barber's is the poster depicted below. 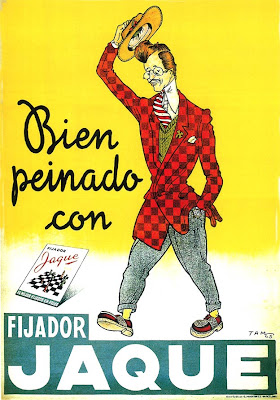 I don't know exactly when it's from. in the UK I might guess "between the wars", but in Spain, for obvious reasons, that expression doesn't exist. As for the translation - Jaque is "check", while fijador is "gel", though I'm far from sure that people actually said "gel" back then. Peinado means "cut" or maybe "styled", but do we, in fact, say "well cut" or "well styled" in English? Probably not. Perhaps "well turned out" might be an adequate translation. 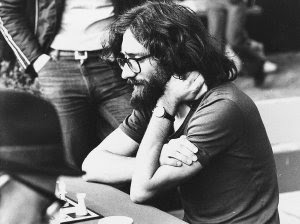 Thinking of chess in conjunction with hair put me in mind of a celebrated spat towards the end of 1973 in the letters column of CHESS. This was kicked off by a letter in the October issue by one Stanley Lorley, who appeared to be attempting to win an award for the composition of the letter likely to be viewed by future generations as most completely and utterly wrong. 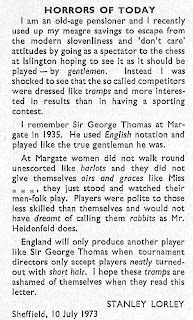 Extra points, surely, for invoking "politeness" while referring to people as "harlots" and "tramps". (We are most fortunate that bizarre misanthropic abuse is a thing of the past in chess publications.) 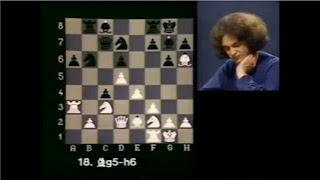 Back in 1973, however, it was apparently a different story. I don't know what the women so politely described as harlots thought about the letter - but as the November issue revealed, the tramps were very much not ashamed of themselves. 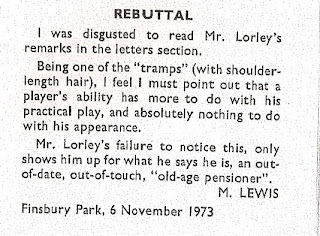 These days this would be a massive internet fight within minutes, but forty years ago one had to have a lot of patience to follow a flamewar, and it was not until December that a Leopold Winter fought back on behalf of the old age pensioners, issuing a challenge to the tramps to come and have a go if they thought they were hard enough. 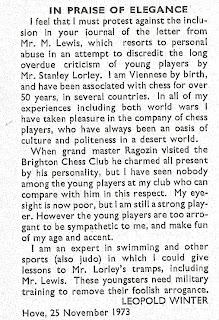 Below Mr Winter's letter, however, was one from Wolfgang Heidenfeld, which took a distinctly different point of view. 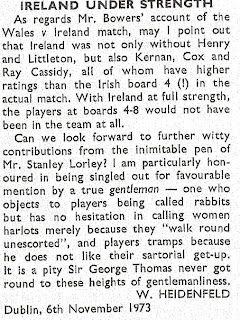 I don't have a subscription to CHESS these days (nor did I in 1973, thank you for asking) but I'd be impressed if today's letters were as entertaining as these. Still, being just as baffled by the modern world as Mr Lorley was in his day, I have no idea why these letters come out in different sizes.

Anyway, that seems to have been the end of the ruck, though on the subject of how-things-have-changed, I did see this letter in the issue for February 1974. 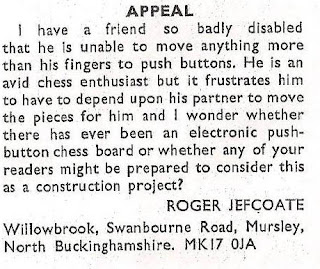 Obviously one hopes somebody was able to do something for Mr Jefcoate's friend, but what particularly struck me was the phrase

It surely can't be too long before younger chess players begin to ask, in connection with electronic push-button chessboards, whether there was ever any other kind.

But back to 1973. I trust Mister Lorley lived long enough to see England producing a number of players equal and even superior to George Thomas, a development about which he must have been decidedly ambivalent, given the length of many of these players' hair. 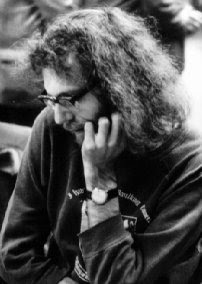 But what of Sir George, who died in 1972, the year before Mr Lorley wrote his letter invoking the late gentleman and Baronet? 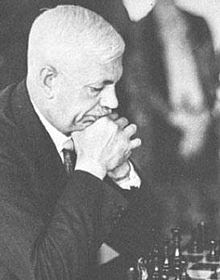 His Wikipedia entry includes the phrase "he never married", which might elevate some readers' eyebrows, given that it used to be obituarists' code for "gay". In point of fact, historiography doesn't appear to know whether or not George Thomas was gay, and quite likely, nowadays, most people couldn't care less either way. It wasn't like that forty years ago. I do find myself wondering what, if anything, his obituaries said in 1972. Or what Mr Lorley would have said.

Regarding the letter about input by keypad.

Actually by 1974, keyboards and typewriter style input to commercial and academic computers were becoming commonplace. Chess programs were then in existence as well, so it was possible to play both against the computer engine or remotely by keying in your move. The first commercial device, Chess Challenger, was only about four years in the future by 1974 with sensory boards first appearing in the early 1980s.

Put me in mind of I Ludicrous’s ‘Stuck in a lift with Noel Edmonds’:
“You must be nudging 70 if you are a day. That beautiful coiffured bouffant – we all know it’s a toupée.”

The letters that CHESS published in the 1970s are often superb. Certainly they're one of the reasons that CHESS was superior to the BCM then.

Letter to the Editor III

Letter to the Editor II

Letter to the Editor

I've thought for many years that this letter was so ridiculous, even for its time, that it might have been a hoax. I did a quick BMD check and have been unable to locate anyone called Stanley Lorley in Sheffield or anywhere else. It could, I suppose, be a typo for Morley or something. Who knows?

That's interesting. Have you checked out Leopold Winter?

Leopold seems genuine: born 9 July 1899 died in Brighton May 1985 looks a likely candidate. I'll research further later. I've long wondered if there was any connection between Leopold Winter and Edward Winter, who, we know, was brought up in Brighton (where he was taught by and played chess with RDK's friend Julian Simpole). When I tried to find out more about the secretive Edward, though, the only birth I could find in about the right year was, I think, in Newcastle. EGW himself is of course well known for writing spoof letters under a pseudonym.

As a member of Brighton Chess Club in the early 1960s I can certainly remember Leopold Winter. He was indeed always impeccably dressed and I believe came to the UK after the Anschluss. He had a heavy Viennese accent which did in those days make him the butt of a few juvenile jokes, but he was an efficient (if slightly fussy) Club Secretary. Julian Simpole (whom I also recall) will remember him, as will GH James – still a member of the Brighton Club.