In which your humble scribe indulges himself in rose-tinted nostalgia, like you do when you reach a certain age


The 41st Best Stand-up Ever
We'll be hearing more from Stewart Lee in the weeks to come. Hopefully, in better quality video clips


The Novag Super Expert is a thing. A thing with a silly name to be sure – conceived, it seems, by marketeers labouring under the impression that chessers of their time would consider a common or garden expert to be woefully inadequate as an electronic play friend – but a thing nonetheless. A very good thing, in fact.

Gather around, kiddiwinks, and let me tell you a tale of how chess computers used to be: 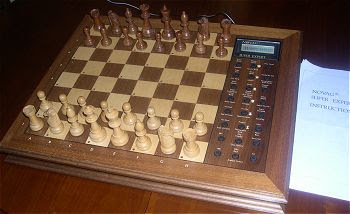 Then Super Expert came along, part of generation of chess machines that turned things around. For a start, each square on these new boards had its own light. Better still, they were ‘auto sensory’: you shoved the pieces around just like any normal set and the Bloody Iron Monster knew what had moved and where it had gone. Better stiller, they were neither iron nor plastic. They were made of wood and looked great. An infinite improvement over the cheap appearance of their predecessors.

This particular machine could play a bit too - in the 2050-2100 range apparently. Laugh it up if you must young ‘uns, but back then that was pretty much as good as it got.

It was the late 1980s. We didn’t know it, but times were a changing. Fritz was coming and he was bringing his mates. Grey squirrels arriving to pretty much wipe out their red cousins, the stand alone machines.

Be kind about our lack of foresight. We'd barely stopped playing with our Spectrums and our VIC20s. We had no idea of what was possible. At the time things like the NSE were considered hot stuff.

The Novag Super Expert. It got to be King for a few short years before it quietly slipped away. 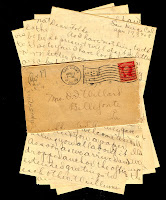 It seems some folk do still buy stand alone chess machines. I asked the ever helpful staff at Malc’s Chess Emporium who these people are. The 'slightly older' customer, was the rather tactful reply. People who’ve already been playing for some time; people who aren’t so confident with PCs. Newbie chessers? Never. They buy software.

Sad really. Do the folk who own(ed) Fritz 4 ever dig it out and give it a game for old times’ sake, as I did with my Super Expert only last week? I doubt the idea would ever occur to them. Not that they'd be able to run the old stuff on their computers now even if they wanted to*.

It seems things simply aren't quite as fashionable as they once were. That's why HMV and Blockbuster are in the poop, after all.

It's progress, I suppose, and the chess world is hardly going to be immune to it. Still our world was once Stewart Lee's world of matter too. We once had stand alone chess machines, and you can file them somewhere between letters and sticks in your list of super things.


* An observation I owe to Martin at C&B.


Letters
Stick
Super
Posted by Jonathan B at 8:00 am

A computer tip. If you have a yearning to run programs from before the days of Windows, search for and download Dosbox. This sets up a 1990s computer as a command shell within Windows 7 with the advantage that it's running on much more powerful hardware.