The twelve solutions of Xmas


Well that went well, didn't it? By some distance the least successful series of Xmas puzzles we've had on the blog. Obviously the different format didn't suit our readers. Apologies.

Anyway, I changed the format because

(a) I'd run out of puzzles, or at least didn't have any fresh sources for them ;
(b) I felt like a change of tack anyway ;
(c) I thought that unlike most puzzles, these wouldn't be solvable by referring to a computer.

This last turns out to be a false impression caused by my almost complete ignorance of Chessbase.

Even so, I think it might have worked as an idea and still might, given a retweak. So I may do it all again next year. Only you can stop me! If you feel able to give any feedback in the comments box (it was a good idea / it was a lousy idea / it might work as an idea if) then that would be welcome.

Finding the right level was certainly a problem: the idea was that by and large they ought to start easy and get get harder, since after the first few, potential solvers would know who at least one of the players was, and so I'd want relatively obscure games by that player. In retrospect I think this was wrong, though - we wanted relatively well-known games, or else it would be too hard. If there's a next time, I'll bear that in mind.

Originally I'd intended to start with Steinitz and work my way through the first twelve world champions, ending with the Korchnoi v Karpov position that I ultimately used on December 27. However, by the time I got started, I'd decided that I needed to begin with an easily-recognisable position, and in fact two or three such, to get solvers started. Which meant it was better to begin with recent history, and work my way backwards. 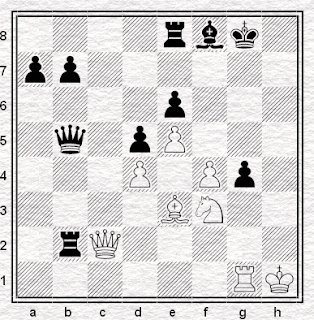 White may still be winning but never again had such a clear chance - and he went on to lose.

I assumed everybody would know that one! 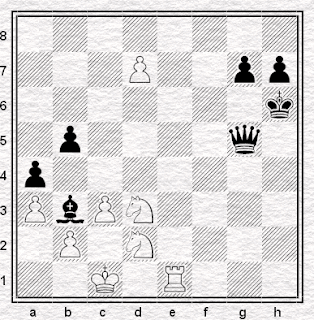 Nigel missed some further wins - and had missed one or two already - but this was the most straightforward. The game was drawn.

My first choice, before I decided to select twelve missed wins, had been game nine, where Nigel missed 46...Rc5! drawing. Or I could have used game eight where he missed 36.Bd4!. Or I could have chosen another opponent altogether. 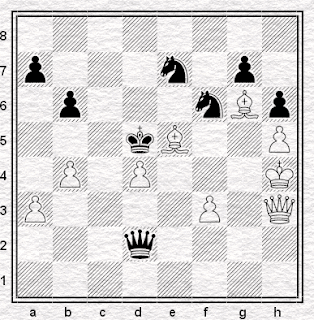 It was recalling this variation which gave me the idea for the series. Also a hugely important moment in chess history - and not only my favourite chess match, but my favourite sporting event of all time. I'll be amazed if we get through 2013 without it turning up again on the blog. 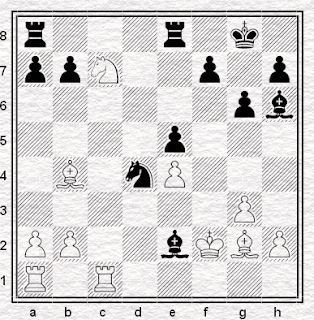 I assumed that by now people would have worked out the theme, and therefore that Fischer must be the next subject. So I thought I'd go for a less well-known game than the previous three.

I also considered Walther-Fischer (maybe I didn't want to use a game that appeared in My 60 Memorable Games) or Portisch-Fischer (maybe I was put off by the existence of two distinct wins at the same move) or Fuster-Fischer (maybe I wasn't sure the win was clear enough or the game too obscure). On reflection I think the Benko game wasn't the right choice: if I had my time again I'd use the Walther, for precisely the reason which caused me to reject it. 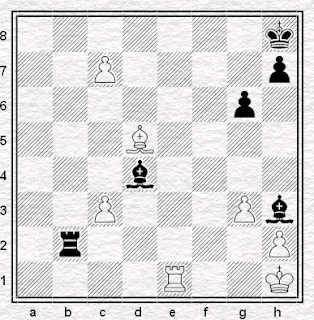 Not a great choice either, but in contrast to Fischer, for whom I had a number of alternatives (it helps having his Complete Games) actually finding lucky escapes for Spassky proved a hard job. Eventually I was tipped off by Bernard Cafferty's comment in his notes to this game, in Spassky's 100 Best Games - that, in another Marshall Gambit game, "Parma even missed a clearly winning move".

Eureka! Or, perhaps, not. Nominiations for more suitable games and variations are welcome! 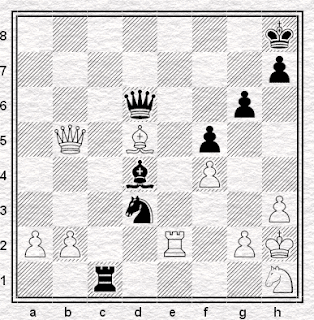 I found this in Leonard Barden's Evening Standard Chess Puzzle Book, which must have provided more material for this blog's Xmas puzzles than any other book. 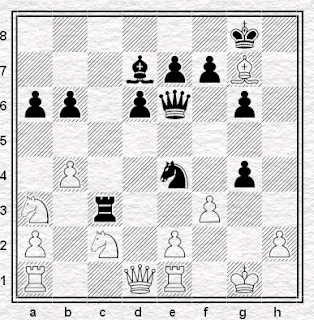 In the game White was still winning until 31.Rf1? when he could have won immediately with 31.Nc2! Qf2 32.Bd4 gxf3 33.Bxf2 fxg2+ 34.Kg1 after which he's going to be at least a rook up. I could have chosen this line instead, or I might (had I not accidentally given a clue on Twitter that I was considering it) have chosen the ninth game of Tal's 1965 match with Larsen. Regarding which: 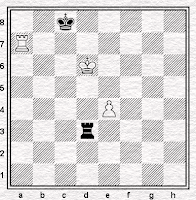 Black in that game has just played 54...Rb3-d3+. White has one winning move - all others draw. What should he play? Answer at bottom of column. 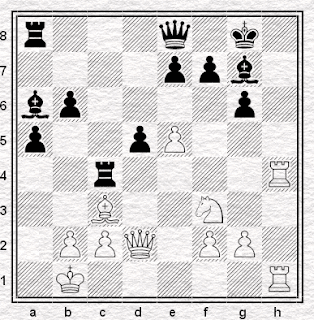 White missed more opportunites (though none quite so decisive or so pleasing) and was still winning right up until at least move 29. He lost on time in the end, which may go some way to explain the plethora of missed chances. 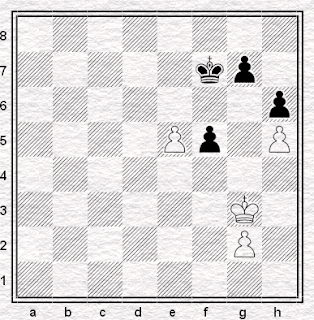 The Sokolsky-Botvinnik game from the same tournament is much better-known (Botvinnik talked in his One Hundred Selected Games about Sokolsky playing without a plan and was subsequently quoted by Kotov in Think Like A Grandmaster). Other games I looked at included Alatortsev-Botvinnik, Botvinnik-Bondarevsky, Bronstein-Botvinnik and Portisch-Botvinnik but none of them seemed to possess the sort of variations, ending in entirely clear wins, that I was looking for.

I was going to use Reshevsky-Botvinnik even though I hadn't settled on a definitive variation I was happy with, but then I found the Ilyin-Zhenevsky game by accident when looking for something else. I rather like it - not only a clear win but an instructive one. Also, as an endgame, a nice contrast to the other positions. 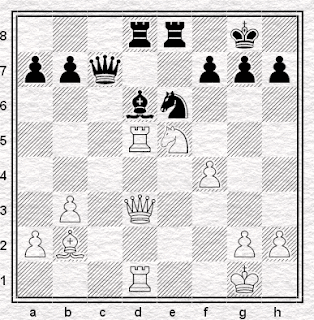 I came across this one simply by working my way through the Nottingham 1936 tournament book to see what I could find. 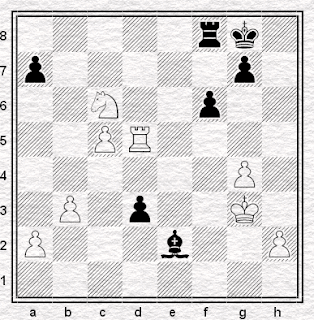 White may well still be winning after the game move but I'm not sure I see anything decisive. Nor am I sure I recall how I found this one: probably by looking up Alekhine's games against a number of likely suspects (Fine, for instance, and other world-class players who never won the title) in case anything good turned up. I eventually preferred this to the probably better-known Asztalos-Alekhine. 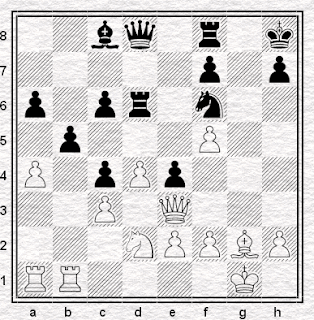 Curiously, the only one of our puzzles in which Black missed an immediate win. Not sure where I found it, but naturally when I'd come across it I checked it out in Aron Nimzowitsch: A Reappraisal, from which I took my main line. Nimzowitsch never did manage to beat Capablanca.

And that, as they said of the Lady of Shalott, is your lot. I worried about making them too easy: clearly, in the end, I made them too hard. If you have any feelings, strong or otherwise, about any of the positions, or the advisability or otherwise of running a similar series again, do say!

[Larsen-Tal solution: White wins with 55.Ke7!. White played 55.Ke6? and only drew, though Black's later errors gave him further winning opportunities. But why does 55.Ke7! win and other moves draw? If you don't know, you need to learn something abour rook endings.... ]
Posted by ejh at 9:55 am

Well, I thought I had a pretty good grasp on "historical" games. (Better than my teammates anyway.)
But those puzzles were way too hard. I mean it woudn't have been enough to have seen those games once or twice. I basically only recognized the games that I had seen "live".

I applaud the effort you put into this. Yes they were too hard.
Even actual positions from the games would have been too hard for me. Then again I might fail to recognise a position from a game of my own!
In an age of dumbing down it seems wrong to critize.
The solutions were entertaining, so thanks for that too and all you do through the year.
EGD

I enjoyed failing at these, especially when I guessed they would all feature world champs.

Thank you for all the hard work you put into this. I am sorry if my use of ChessBase to solve all but the first two causes you to doubt the worth of that effort. As I have mentioned elsewhere, I doubted whether anyone would be able to produce solutions without such methods.
By searching using fragments of the position that were unlikely to have changed in the variation (Huebner's White knight on h1 was a great help for example) I was able to find all the games within 5 minutes except the Botvinnik ending. Even there, once your hint made it clear that I should be only looking for K+P endings, it didn't take long.
The only variation that caused problems was the Portisch - Tal game. This required some tricky retrograde analysis since the "obvious" moves to get rid of the pawn on e2 (27....gxf3 28.exf3) didn't work. I still think that transpositions mean that there are 4 possible solutions to the puzzle as set, although the variation you quote may be the most plausible.
I'm afraid that I haven't got any good ideas as to how to retweak the idea. The ChessBase search functions are very powerful, although it does depend on knowing how to use them. One interpretation of the lack of comments and that everyone else found the puzzles too hard is that not many do use ChessBase in this way. My attempt to guess in advance which position you were going to use for No.12 isn't the answer!

I think it was a very creative way to create a set of puzzles, so thanks for you efforts, even if most of them were too hard for me. Maybe you could have just created a conventional set of "find the win" positions, by instead showing the positions where the win was missed, and also inviting solvers to name the game. Of course, that goes back to the original problem of people solving them using computers. But is this really such a problem?

Dammit, I knew the Petrosian one was an interzonal, but all the old memory was throwing up was Savon -v- Reshevsky.

I thought they were quite good actually, but Chessbase searchability is a problem, clearly.

I didn't see much point - either you know the position or you don't (usually, for me, the latter), so I didn't think for more than few minutes about any of the puzzles. I agree that if you'd rewound the position and also asked "Can you do better than the grandmaster?" then I would have been more involved.

I wouldn't mind seeing more of this kind of puzzle next Christmas - just maybe not all twelve of them.

I wonder if it's possible to have twelve puzzles on the theme of, cannot be solved in chessbase?

Well I quite enjoyed them! Incidentally I recognised Capa v Nimzo and about three others, but not the Topalov game. And did Hubner really miss a win I would expect an 80 strength player to see?