The Other Talent of Bill Hook: Another Look

Almost exactly a year ago we posted about Bill Hook, his chess and his art. It was prompted by his autobiography "Hooked on Chess".

We had a good look at his paintings, and some of his photographs, and were able to admire the range and depth of his talent. The blog finished with the hope that someone might get in touch and show us more of his work.

Well, someone did. In October last year the delightful Mimi Hook, Bill's wife, stumbled on our blog and made contact - opening up a treasure trove of Bill's art. Wonderful. You'll find it all on Mimi's Facebook page.
Selecting from Mimi's gallery (though bearing in mind that those images, and thus the ones below, are photographic reproductions), let's have a look at another sample of Bill's paintings, with the added bonus of Mimi's guidance on subject matter. First though, a reminder of this domestic portrait of the lady herself by Bill (in the book, as we saw last time), crafted with unobtrusive and affectionate admiration for his partner-in-life. 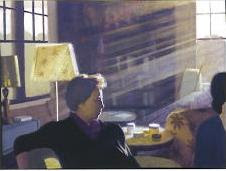 Although many of Bill's paintings show him to have been an exuberant full-spectrum colourist - as we'll see later below - the richness above is fashioned from a palette reduced to an essential minimum. The effect of is of calm and reassurance; as if to complement to Bill's own exuberant activity.

As you look through Bill's portfolio, you can't help but be impressed by the variety of his subject matter, encompassing all the genres of the discipline. There are competent - maybe more than competent - life studies, executed when a student...

...and, as we saw last time, stop-in-your-tracks portraiture.

He could also convey atmosphere, as in this local scene done in conventional style that could have been good enough - more than good enough - to have been a poster for the British Virgin Islands Tourist Board. 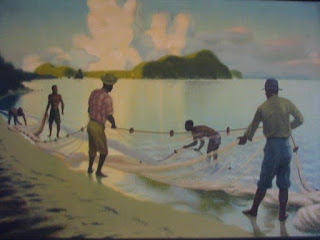 The skein of fishermen, labouring along the water's edge, is especially evocative ... and he found a limping rhythm also in the procession of verticals across the cluttered roof-scape shown below; but this time human presence is implied - he has composed a kind of still life, XXXL. 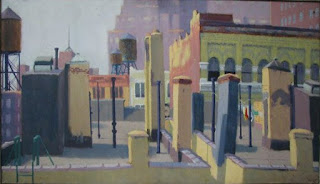 This next suite shows him turning up the volume, in carefully choreographed blocks of vibrant colour. They are in what might have been his signature jig-saw style...

... if full-blown abstraction hadn't taken him in this direction:

As Mimi says, the underwater feel is apparent on the left, whereas - as she sees it - it's the centre of the earth on the right in another favourite of her's.

Last time we saw an obviously chess-themed composition, this "semi-abstract": 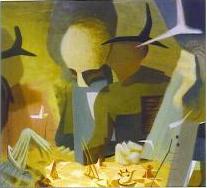 "Fisher's" (on the right of the strip of four above) is another chess painting: a geometricized group of engrossed players at the legendary club. Mimi says that Bill called the next one "Absorption" - possibly a chess hint. But, she says, not everyone agrees that there's a chess player in the composition. Is that one, centre-left, surveying the board, lost in thought, and, with chin in hand, striking a typical chesser's pose? 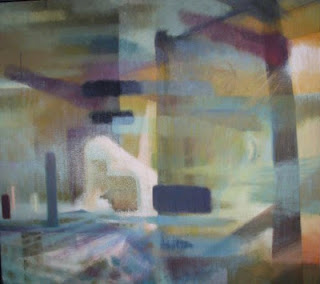 This more comprehensive survey of Bill Hook's paintings confirms that he was an artist of considerable talent. Thanks Mimi for giving us the opportunity to showcase his work again, and make it better known - among an audience that he surely would have relished: his fellow chess players (and anyone else looking in, of course). 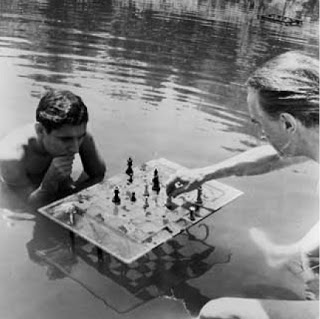 The Barbican in London has a Duchamp season coming up, including a screening of two Duchampian chess films on the 24th March. One is of him playing Larry Evans "underwater" (as their blurb puts it). Cue another look at The Other Talent of Bill Hook's Friend.

Thank you for this!

I know diddly about art ... but I see that his pet line in the Winawer with ... Qa5 and ... Qa4 is becoming quite fashionable these days.