Much of a MacCutcheon 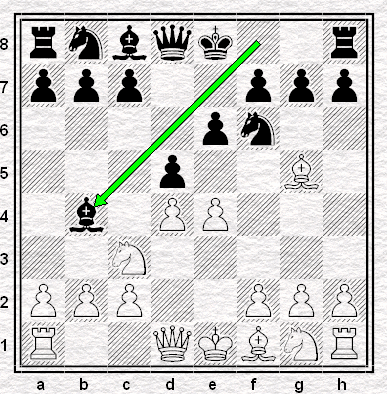 I've always liked the MacCutcheon, though it's never been a fashionable line.

It's been particularly unfashionable for a few years now as a result of critical developments in the 6.Be3 line (after 5.e5 h6) which continues 6...Ne4 7.Qg4! 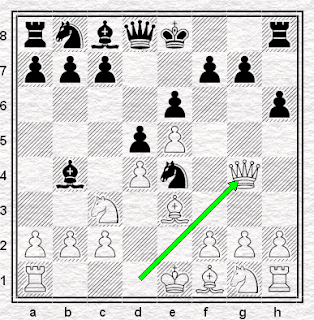 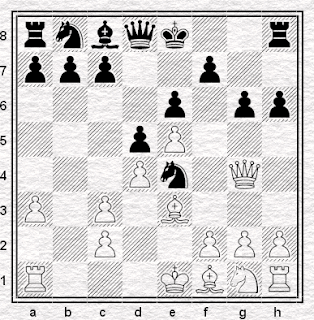 This is a position in which Black has recently been considered to be in trouble. 9...Nxc3 is thought to be too dangerous and 9...c5 10.Bd3 has also been adjudged better for White.

Viktor Moskalenko, however, has counter-attacked on behalf of the Black pieces by recommending 10....h5 in his book The Flexible French (New In Chess, 2008):

and he maintains his faith in the line. Moreover the MacCutcheon has recently been recommended by Watson in the latest edition of Play The French (Everyman, 2012) 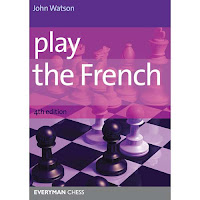 and by Antic and Maksimovic in The Modern French (New in Chess 2012). 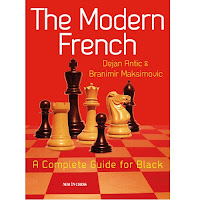 So right now, though the variation is still rare at the top level, three recent authorities consider that Black is surviving, and better than surviving.

When you start studying the MacCutcheon, which is not at all short of weird-looking moves and unexpected transpositions, you sooner or later notice, or have it pointed out to you, that in the old main line, which goes 6.Bd2 Bxc3 7.bxc3 Ne4 8.Qg4 g6 (or 8...Kf8, Antic and Maksimovic's preference but not mine) and normally continues 9.Bd3, one of White's apparently odd alternatives is 9.Be3.

This, at first sight, doesn't seem to achieve anything other than leaving the c3 pawn en prise, but it does all but dammit transpose into the aforementioned and highly dangerous 6.Be3 line. The dammit, if you will, is the pawn on a3, but what significance, if any, does it have? 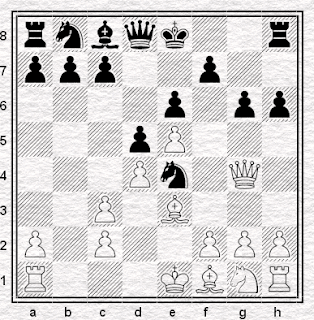 The reason I ask is that if the differences are negligible, it would puzzle me that 6.Be3 should be thought of as a threat to the MacCutcheon's viability while 9.Be3 is an obscure sideline. So what do our authorities say?

Antic and Maksimovic don't actually say anything about 9.Be3 since (as mentioned above) they prefer the line with 8...Kf8. (For the record, they then consider only 9.Bd3, though Moskalenko looks at 9.Be3 in this line too.) Watson, for his part, often follows Moskalenko's analysis, though they characterise 9.Be3 rather differently.


Although White has made an extra bishop move, Bd2-e3, he has gained a tempo by not playing a3.


Among other disadvantages, 9.Be3?! wastes an important tempo.

This isn't necessarily as contradictory as it seems, since Watson is making a direct comparison with the similar position arising after 6.Be3 while Moskalenko's comparison is with White alternatives to 9.Be3. Even so, if it's not entirely contradictory, nor is it entirely consistent, though there is agreement about one potential advantage, to White, of having played a3. This comes (after 6.Be3 Ne4 7.Qg4 g6 8.a3 Bxc3+ 9.bxc3) 9... c5 10.Bd3 Nxc3 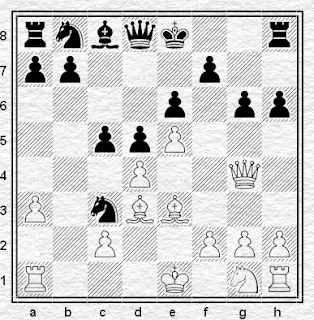 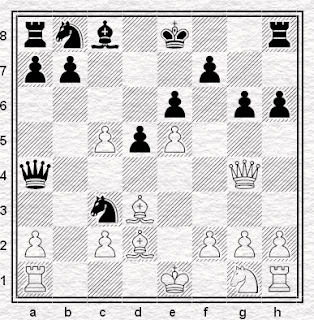 which is fine for Black. Moskalenko, in Watson's paraphrase


points out that the lack of a3 means that Qb4 isn't available for White. 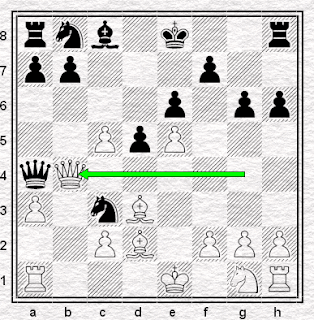 So that all seems straighforward enough - 6.Be3 is better than 9.Be3 because the former involves playing a3 and this is of benefit to White. Which may be so, but the curious thing is that neither Watson nor Moskalenko treats 10...Nxc3 as the main line against 9.Be3. Both prefer 10...h5, Moskalenko's "Black Jet" (or the first half of it, at any rate). 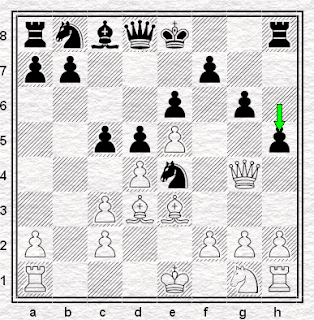 They also prefer it after 6.Be3, where it currently seems to be the move that has kept the variation going for Black. But, in either line, it's useful to note that if White plays 11.Qf4, trying to keep the queen on the fourth rank and hence maintain potential access to b4, Black plays 11...g5 (second half of the Jet) forcing 12.Qf3 with the following positions, depending on whether we arrived via 6.Be3 (with a3) or 9.Be3 (without it). 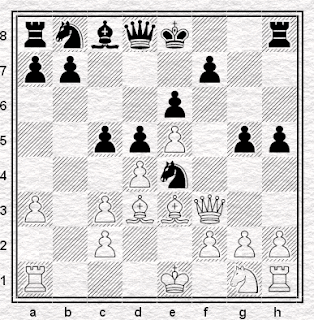 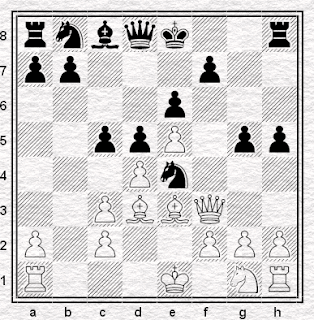 So what difference does it make?


As Mr Morrissey would no doubt tell us, one difference from the previous variations is that after 12...Nxc3 13.dxc5 Black doesn't have the Qa5-a4 manoeuvre since while the white queen, no longer on the fourth rank, can't get to b4, neither can it be threatened with exchange by ...Qa4 (which would just drop the knight). But Black has other options including 13...d4 and 13...Nc6, which seem reasonable enough.

Black presently seems to be holding comfortably enough in both lines, whether a3 is in or not. And what interests me is that in Watson and Moskalenko's main lines, with 10...h5, I can't see what role a3 plays either way.

So does it make no difference, in the "Black Jet" lines, whether the rook pawn stands on QR2 or QR3? (Such has been known.) If that's so, aren't the two variations of equivalent value, and does 9.Be3 merit the "dubious" marking which Moskalenko appends to it?

Or am I missing something and the fact of a2-a3 does make an identifiable difference in the Black Jet? If so, what would that difference be?

Isn't the reason that there aren't more MacCutcheons at the top level is because (almost) everyone plays 4.e5, because the MacCutcheon provides easier equality?

I believe your last paragraph regarding the strength of Nxc3 is correct.

Neil McDonald's How to play against 1 e4 (EverymanChess, 2008) also looks at the Mac.

FWIW, my attempt to study the MacCutcheon from the Black point of view ended in mass confusion. It just seems to be totally random.

What difference does it make?

Perhaps with his arm gestures, Morrisey is deciding to place the pawn on a3, no a2, no a3...

Another source from my far too big collection of French books...

Watson's Dangerous Weapons: The French (EverymanChess, 2007) has a chapter on 6 Be3 from White's point of view. Presumably a bit out of date now, mind.

Finally, the Chesspub database contains 56 Mac games of which 17 start with 6 Be3 and 0 with the Bd2-e3 plan.

For many years, there was an assumption that the moves of the Fischer game against Rossilimo analysed in MSMG were more or less forced. Apparently alternatives have now been discovered.

Re: a3, my feeling is that having played it has to be of advantage to White more often than not, if only because I can see what it might do for White (support a piece coming to b4, prevent an opposing piece coming to b4) but not so much how it might be a drawback. But as I say in the piece, in the actual Black Jet variations (I nearly wrote "concrete Black Jet variations") it's not apparent that it is, in practice, an active theme.