JOURNALISM NEWS: Controversy has broken out in the world of economics journalism after it was claimed that studies of Kenneth Rogoff "failed to take into proper account" his past as a chess grandmaster.

Sources within the profession have accepted that their profiles of Rogoff employed a flawed methodology. "We have to accept that we got it wrong", commented one. "We paid insufficient attention to a whole crucial section of his CV."

"We took into account his Harvard professorship and his time as chief economist at the IMF", the source continued, "but we should have been talking more about his previous career as a chess professional."

"Had we known he was going to foul up this spectacularly we would have put our feature writers on the job and had them write pieces saying how as a chess player he was probably socially inept and more than likely mad." 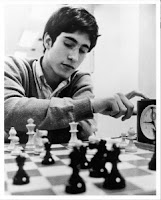 More dangerous than he looked

"But we didn't, because we liked what he was saying."

However, some commentators argue the problem was one of causation. It was not the economist's past as a chess player that should have raised suspicions, but his leading role with the International Monetary Fund. "This is why we need to encourage professional chess", one said. "See what happens when these people start doing something else instead."

Meanwhile the student who drew attention to Rogoff's full CV explained how he had carried out his research. "I just looked it up on Wikipedia", he said. "Isn't that what everybody does?"