Death does not become us 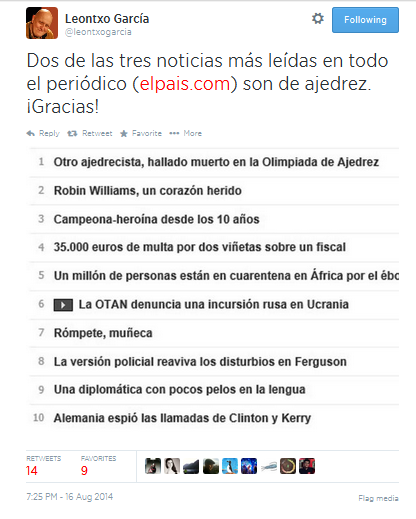 Of the three most read articles in El País, two are about chess. Thank you!

The top piece, one of the two to which he refers:

Another chess player found dead at the Chess Olympiad. 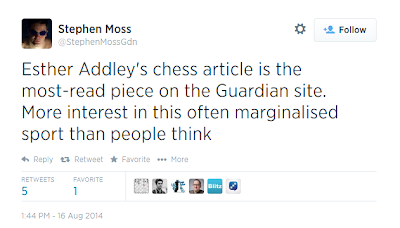 Now I don't particularly want to pick a fight with Mr Moss, Ms Addley or Sr García, but I confess to be having been taken rather aback by both the Tweets above.

Firstly, is the occasion of competitors' deaths at a chess event a proper time to point to the stories reporting their deaths as evidence of public interest in chess, let alone - Leontxo García - to congratulate oneself for the stories?

[More about the Guardian pieces tomorrow.]
Posted by ejh at 7:50 am

Indeed. No-one is claiming that the attention paid to Robin Williams' death is good news for comedy.

These stories are not about chess at all. They're about the idea that playing chess might kill you.

It almost certainly won’t, of course, but that sort of story is never going to attract clicks on the interweb.

Neither is anybody claiming that repeatedly saying 'Nanu Nanu' will eventually do you in.