Aberystwyth: "my sort" of chess

And so I awoke with a thirst for battle, but not a reckless battle, but one prepared beforehand, like a decisive encounter in a war. Hence the stages in my opening preparation, carried out on the morning of the game.

First I had to decide the question: should I play what I normally play, or should I try to surprise my opponent with my choice of opening? My second made his recommendations to me on both possibilities, and we began considering opening with the king's pawn. In its favour, apart from its surprise value, was the fact that afer 1. e4 Portisch feels much less confident...

"But if it should be a Lopez, what then?" I asked dubiously.

"But I never played it even as a child!"

"So much the better! Portisch plays only the variation with ...Bc5."

And I was shown a multitude of variations of primordial antiquity, which had been worked out taking Portisch’s games into account...

I hesitated, and was all ready to agree, when I suddenly sensed: this is no way to play! This is not the way to plan a decisive battle. After all, if I were to fail to gain an advantage from the opening, I would not forgive myself for having betrayed "my sort" of chess. 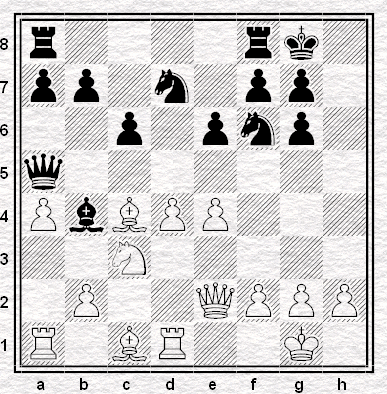 I had a disappointing time of it in Aberystwyth. Not that I was expecting to show up on the prize list or anything, but I'd hoped to give a decent account of myself, play a few titled players, maybe even have an influence on the championship by taking part in a crucial game and in the end I did none of these things.

None of these things except the last, since I did, in the end, in the last round, have a crucial influence on the women's championship.

As it was a morning start in the last round, not much time was available for opening preparation, but Angus French, who, though not present, kindly acted as my unpaid second*, sent me some of her games, giving me just time to cobble together a scheme against her apparently inevitable King's Indian Defence. 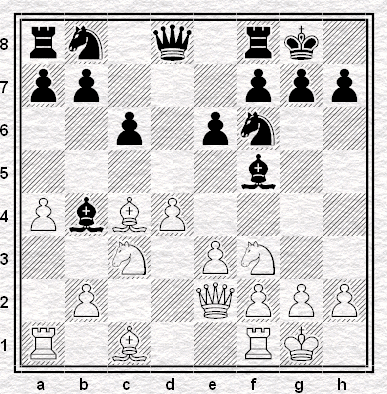 My preference when Black is for 9...Nbd7 and then 10. e4 Bg6 but hers was for 9...Bg6, a viable move and one I've neither played nor met. I have, however, looked at it, more than once, both to consider playing it and to consider how to play against it.

The books - where "books" means Burgess and Vigorito - prefer 13. Bd2, reckoning that Black is OK after she takes the pawn with 13...Bxc3 14. bxc3 Qxc3. Maybe she is and to be honest I hadn't really worked out what I was going to play if she had. All I was working on is that I've played a lot of Slavs and I just assume that if White gets that pawn centre, two bishops for two knights and a chance to kick the black queen around, that ought to constitute some kind of compensation for the pawn.

White doesn't have to sacrifice the pawn. But once he's offered it, Black does have to take it. Otherwise she's just playing with knight against bishop and against a pawn centre which - since the white-squared bishop is off the board - she can't put under very much pressure. It's just a mediocre position, or so it seems to me. So it seemed to me at the time. Not because I knew the theory, but because I knew a little bit, from experience, about that kind of position.

In the end she didn't, playing 13...Qh5. It doesn't lose, as such, but White's much better - and after 14. Qxh5 gxh5 15. f3, 15...c5? probably does lose. So pretty soon, rather than having two bishops for two knights and a big centre as compensation for a pawn, I had both those advantages and the extra pawn as well. In the end it was a nice game for me, an easy one, in which I just had to make a few sensible moves and then found I was winning.

If only I'd had a game like that much earlier on. But it can't have been much fun for Kalaiyalahan, who lost her chance to share the women's title without putting up so much as a squeak of a fight.

Now I can't know for sure what happened before the game, but I do know that in an earlier round, she'd lost on the Black side of the Fianchetto King's Indian. The Fianchetto is, as she will have discovered when preparing, my variation of choice when playing against that opening.

So I am going to speculate that having lost that game, in that line, and having discovered that she was going to have to play that same line again, she decided to drop the opening she knew and surprise me instead.

Which is OK. It might have worked. But as it turns out, I wasn't nearly as surprised as she was. It's a risk: if you don't play the lines you normally play, and hence that your opponent is expecting, you may well sidestep their preparation. But what happens if you're walking into their experience instead, while leaving your own experience at home?


After all...I would not forgive myself for having betrayed "my sort" of chess.

I took the opportunity to check the practical theory. It's a popular main line, with a divergence as to whether to defend the c pawn with Bd2. That being the move that can be played without thought, it's the most popular. Offering the sacrifice with e4 is second most popular, but accepting is a minority choice. Rather than .. Qh5, .. e5 is preferred which is presumably just marginally better for White. It's been played in a number of GM clashes, for example Gormally v Pert (N) from the 4NCL a few years back.

But I accept what you say about staying on your home territory. although it can make for unambitious opening choices.