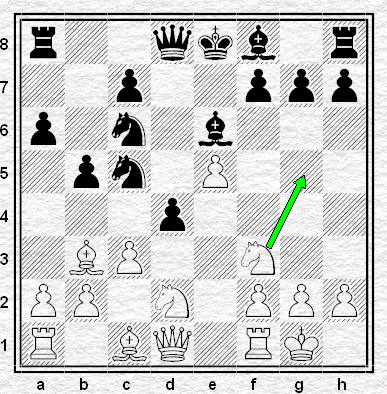 As soon as this was played the Soviet delegation exchanged knowing winks and made for the bar.

According to your friend and mine, in his notorious book of the match. It was 8 August 1978 and Karpov led 1-0 with eight draws, a misleading score in so far as the match sounds much duller than it really had been, both on and off the board.

My favourite sporting event of all time, the Baguio match, and this was my favourite move from the match. It was inexplicable, to my thirteen-year-old eyes, just putting a knight en prise for no reason I could fathom, not until somebody explained it to me. (I don't know who. Possibly Ray in his instant book, or possibly whoever was writing the notes for whichever newspaper I read the score in.)

At first I thought White had to have some kind of discovery, after 11...Nxg5, maybe 12. Ne4, but nothing seemed to come of it and indeed nothing does come of it. But even when you understand that White gets the piece back with 12. Qf3 it seems inexplicable in a different way. How did anybody think of that?

Nowadays computers think of all sorts of things that we find it hard to see ourselves. Perhaps we are so accustomed to surprise that surprise itself is no longer what it was. But back then, thirty-six years ago today, half a lifetime yet not so very far away, it was incredible.

In order to consider it you had to envisage the queen coming to f3, which you would never do. Why not? Because that square was never going to be free in the first place. Why not? Because the knight that occupied it had no reason to move. Besides, where was it going to move to? Not g5, where it would simply be en prise...

Korchnoi didn't take it though: he played 11...dxc3 12. Nxe6 fxe6 13. bxc3 Qd3 after which Karpov played 14. Nf3. Ray gives that move a question mark and prefers 14. c4, with the agreement of neither the computer, today, nor Kasparov in 1996, when he twice reached the position during his match with Anand. In game six Kasparov followed Karpov in playing 14.Nf3 - Anand followed Korchnoi in getting a draw - and then improved with 14. Bc2! when Anand unwisely repeated the variation in game ten, the notorious door-slamming game.

Curiously in 1978 it was Karpov who chose not to repeat the line. On the four further occasions that Korchnoi offered him the Open Variation he preferred 9. Qe2 or 9. c3 to the 9. Nbd2 of the game. Annotating game twelve Ray suggests:


the fact that Karpov does not try to repeat the opening of game ten makes one wonder whether the spectacular 11. Ng5 was bluff after all.

A reasonable point, though Ray doesn't tell us what Korchnoi's team might have discovered to make him so keen to repeat the line himself. But in the Spectator for 31 March 2001, annotating Kasparov-Shirov from Linares 2001, Ray mentions the line 11...Qxg5 12. Qf3 0-0-0 13. Bxe6+ and adds:


if 13. Qxc6, Black has the merry jape 13...Qxe5 14. Nf3 Qd5 15. Bxd5 Bxd5 when the white queen is trapped in mid-board and a drawish endgame will be the outcome. This resource was found by grandmaster Michael Stean during World Championship analysis in 1978. 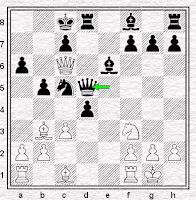 Not a decisive one, evidently, or else Anand would have chosen to take the knight when Kasparov offered it. But a shame Stean's find didn't appear on the board in Baguio.

But 11. Ng5 did, remarkably so. I don't know whether responsibility for the idea has ever been established - I've heard Tal and Zaitsev invoked, but do we know? - but I do know that it was Karpov who played it, and ever since he did, it's been among my favourite moves.