My grandmother was tall, six feet tall. The only trouble was she never reached that height when I was a child: she'd bent into an upside-down L-shape.

I read The Grass Arena in Aberystwyth, quite by chance: it was available in the Oxfam secondhand shop there, shelved (or just replaced) in the wrong location so that it happened to be there when I was looking for something else.

It was the old Faber and Faber edition, which was withdrawn from circulation in circumstances which don't appear to do much credit either to the publisher or the author. It disappeared so thoroughly that I couldn't even track down a suitable image that matches the front of mine. [EDIT: since added, 22 August, from a scan of my own copy.] 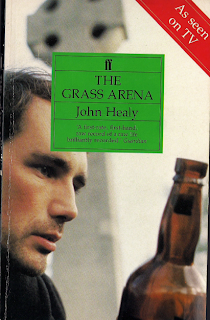 I'd not seen the film, though I've seen it since. I didn't go for it much, Peter Postlethwaite notwithstanding. I've not seen the more recent Barbaric Genius either, so other than that The Grass Arena involved drinking, homelessness and chess, I didn't much know what to expect. I read much of it up the pub, reading quickly, as one does when enjoying a book, while drinking, if not more slowly then with more thought, as one does while reading a book about the destructiveness of drink.

If you're also a chessplayer, which given the subject matter of this blog is more than likely, you're probably most interested in the chess - which, if you've seen the film, you'll probably expect to play a more prominent part in the book than it really does. You might also expect it to be more exaggerated than it is, since it's well-known, in the chess world if not outside it, that some of the claims made for Healy's chess prowess, both on screen and by Healy himself, are not to be taken seriously.

In the book the exaggeration is not nearly so blatant. But in truth Healy was a middling club player: in an equally important truth, to reach that level was an immense achievement for somebody who never started playing until he was almost thirty. And never mind the other circumstances of his life.

But while chess takes up about a third of the film, it's maybe a tenth of the book at most: the rest of it is about drinking, stealing, running away, being in the army, deserting, being caught. Being beaten up in cells and prisons and on the street. Being hungry, being cold. Being in hospitals and in prison. But making such a list, or one ten times the length, doesn't explain the book, still less how good a book it is.

When The Grass Arena was first published I was working in Oxford, my first real job, in a social security office where a few of our clients were living lives like Healy had lived. At one time they'd been called down-and-outs, vagrants, or tramps, depending on who was doing the calling and when they were doing it. By the late Eighties we tended just to say "homeless", which describes the status all right but forgets to describe the flavour. The flavour, and inevitably the smell.

You can see The Grass Arena as a redemption narrative if you really want to, though I'd rather that you didn't, since however interesting the exceptions are, the point remains that they're exceptions. For most of the people in the grass arena, then, in the Eighties and in the present day, there is no redemption, just the cold and hungry decline towards an early death.

Healy is in Oxford a couple of times himself in the book, spending some time at the Ley Clinic, which was set up in Littlemore in 1970. (It's now in Yarnton, at the other end of Oxford.) He was also in prison there, a prison which has since closed but one that I used to walk past on my way to a favoured boozer: sometimes you could see women by the walls calling up to their blokes in the cells. There wouldn't have been anybody calling up to Healy.

Anyway Healy is in Oxford again tomorrow, speaking at Blackwell's on Broad Street at 2pm.

I'd be there if I could. I've never been in the grass arena, but I've seen what it does to people.

It's always been possible to hate the people there - nice is what they're not - though it's not always been official policy, as it is now. But I've more than once been a hairsbreadth from the street. And I prefer the version which goes like this: there but for the grace of God go you and I.
Posted by ejh at 7:55 am

Am I right in thinking that prison is now a luxury hotel?

Am I right in thinking that prison is now a luxury hotel?

On Twitter yesterday somebody was talking about a nurses' home which has been converted into luxury three-bedroom flats, one of which was going for seventeen and half million nicker.

You'd like this, Justin, if you've not heard it before.