The flipside of Dominic Lawson II

As promised yesterday, here's Dominic Lawson showing who else he's prepared to insult.

If you insert the term "inscrutable Asiatic countenance" in Google, you only get a couple of results. One likes to think that this is because few people would use such a horrendously racist stereotype.

But Dominic Lawson has.

Exactly what you'd want from somebody invited to lead a multiracial community, don't you think?

More Lawson tomorrow. In the mean time, we might add to the list of constituencies of whom Lawson is liable to speak objectionably, feminists.

It's going to be an inclusive kind of Presidency, isn't it?


- - - - -
EDIT: Just this evening I came across this remarkable commentary. Do we really, in 2014, want our president to talk about girls dressing as if they "were on the game", or to use phrases like "debauched as her demeanour seems intended to demonstrate"? 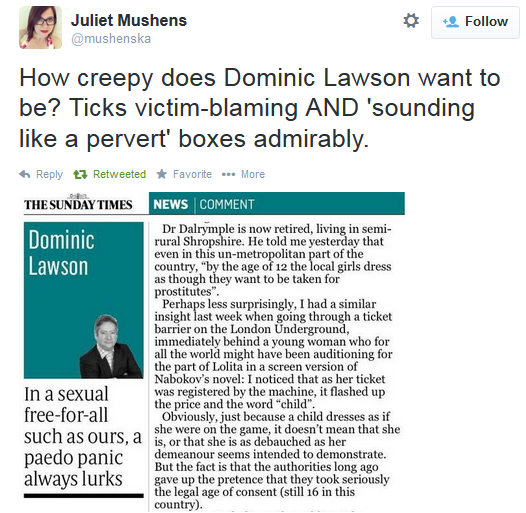 [Sax Rohmer, for those not getting Mig Greengard's reference]
[Thanks to Rob Thompson]
Posted by ejh at 7:50 am

I am just as unimpressed by DL's views on football or his general political views as you are, but I would expect these things will not feature very largely in his role as ECF President. The ECF (rightly) does have an inclusive agenda, but we should remember that Tories play chess, too.

He does seem to have the right credentials for promoting chess and I wish him well in the post.

we should remember that Tories play chess

The ECF (rightly) does have an inclusive agenda

On paper (or on Twitter) it does. But how do "inscrutable Asiatic countenance" and "poofter" fit in with that, I wonder?

Lawson was also famous for his dismissive verbal comments about chessplayers during the 1993 world title match, e.g. his comment after a minor error by Miles "That's why [those GMs and IMs] are in the analysis room earning pin money while Short and Kasparov are playing for millions."

What ejh said. I can think of a number of right-wing people in chess who would be fine when it came to inclusivity. (I can't, for example, readily imagine David Sedgwick writing articles like the ones quoted.)

Jack knows David better than me. But several well known players with right wing views used offensive language and stereotyping in the wake of t-shirt gate. I wasn't completely comfortable with the Paulson meme on this site either.

But 1994 was 20 years ago. The Conservatives were defending clause 28 at that time. I would not be surprised if DL's public opinion change at the same time as Cameron's in 2004.

Well I guess the ECF could ask him, couldn't they?

Maybe Niall Ferguson is available for this position?

It would be tempting to say that the issue doesn't arise, but regular tournament players can think of a number of historic examples.

"I can't, for example, readily imagine David Sedgwick writing articles like the ones quoted." (Jack Rudd)

However, I feel that I'm a rather unlikely champion of inclusive Toryism. I can't recall having written a political article of any description for over thirty years.