The flipside of Dominic Lawson IV

Yesterday we were discussing, in passing, Dominic Lawson's time working with Ray Keene, not least as his editor at the Spectator, which periodical Lawson edited from 1990 to 1995.

Now Ray has, of course, been exposed over the past year as a gigantic plagiarist, a matter which one might expect to concern anybody who was a professional journalist, like for instance Dominic Lawson. But as this blog has often documented, Ray's habit of stealing other people's work and passing it off as his own is merely an outgrowth of a much older habit - the practive of reusing his own work, in different places (or even the same place) and passing it off as new. Having established to his own satisfaction, over many years, that he could get away with that, it was just a short Penguin-step to the industrial-scale plagiarism of the past few years.

One would expect the recycling habit to concern professional journalists too, what with the issues it raises of copyright theft, cheating the reader, journalistic integrity and so on.

Still, an editor doesn't necessary read everything in their magazine. Manifestly so, since amazingly, the immense amounts of recycling that went on in Ray's Nineties Spectator columns went unnoticed by the various editors of that periodical. Nor indeed were any of them apparently aware that Spectator material was being recycled in books such as this* 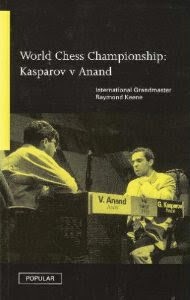 without the unsuspecting buyer being informed that the material they were buying had already appeared elsewhere.

But Ray's recycling habit didn't begin with the Spectator in the Nineties. It's much older than that. Today we can present an early example - though not Ray's first, naturally - which is the instant book he produced on the 1983 match between Kasparov and Korchnoi, the Candidates semi-final. 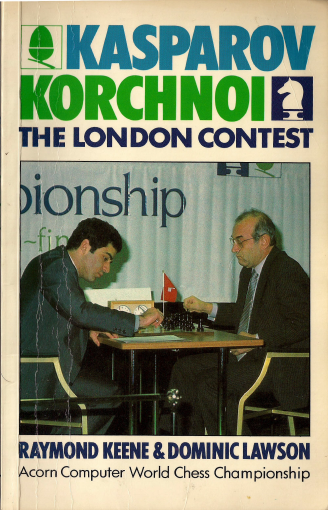 As with other books of its type, Spectator notes were copied out in the book often word-for-word, though with some additions and deletions. Additional games, as well as the match scores, were given, and these, too, were often similarly copied. No reference was made to previous publication, previous copyrights or anything like that.

So, for instance, the notes to this game, which appear in the book, with no suggestion that they are anything other than original - 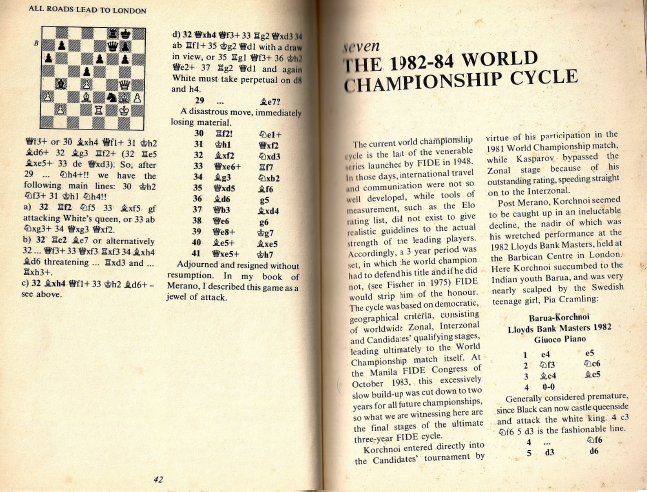 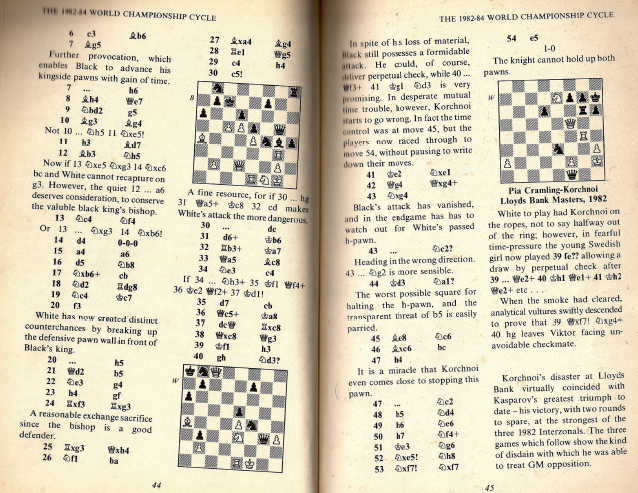 - were in fact largely recycled from a 1982 column. 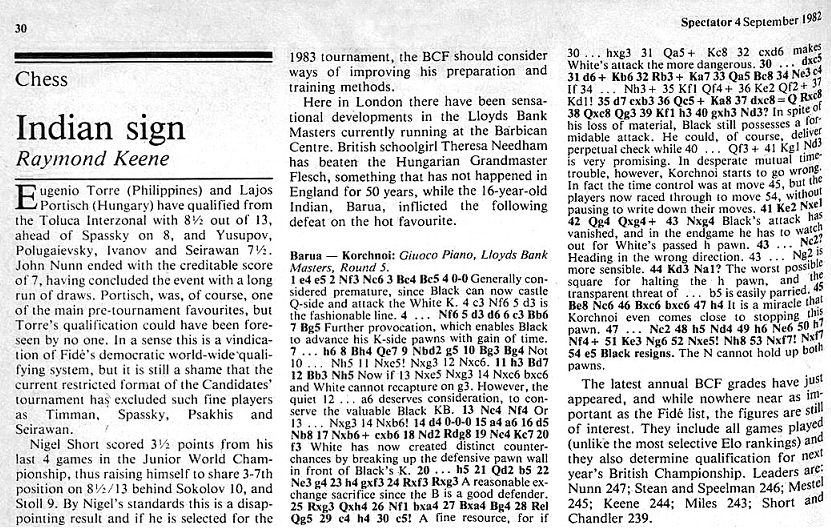 There are several similar examples in the introductory part of the book. Regular readers have seen many similar examples before, so we won't overload you. However, there's a nice annex at the bottom of this post where you can see them.

Not all the notes to the match games are copied (if only because the periodical didn't actually cover all the games, har har) but the decisive games mostly feature extensive borrowing, as do one or two others besides. Here's game one 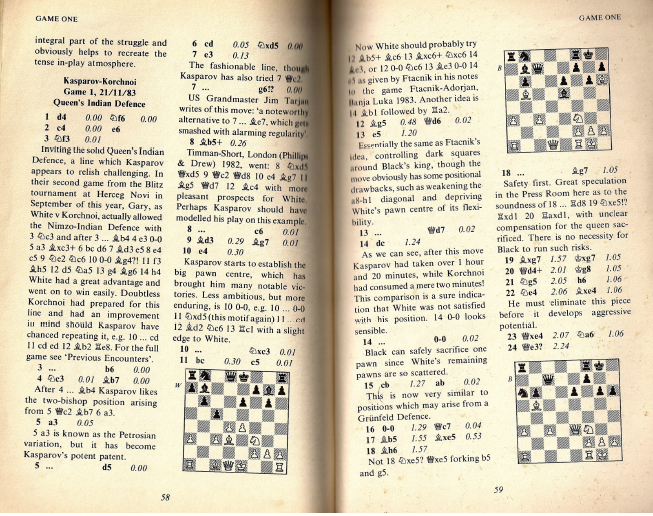 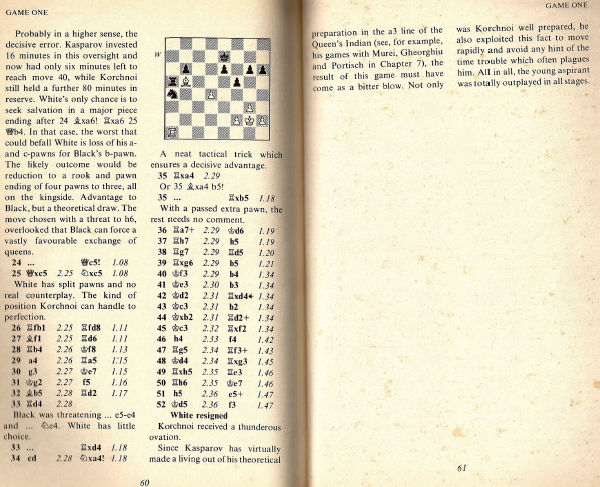 and here's the original, the Spectator from 26 November 1983. 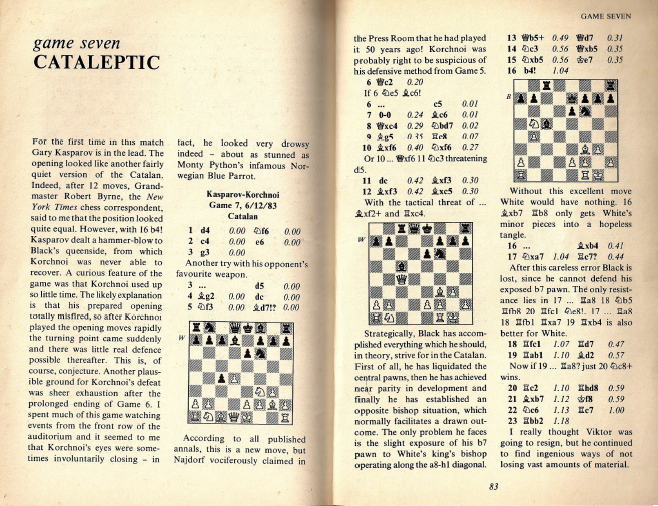 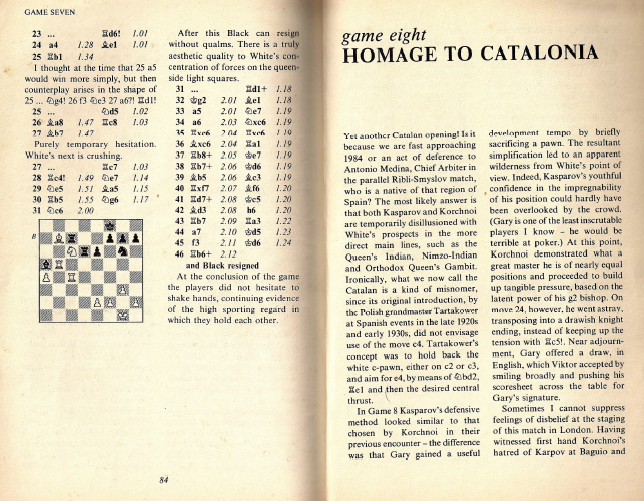 is ripped off from the Spectator for 17 December 1983 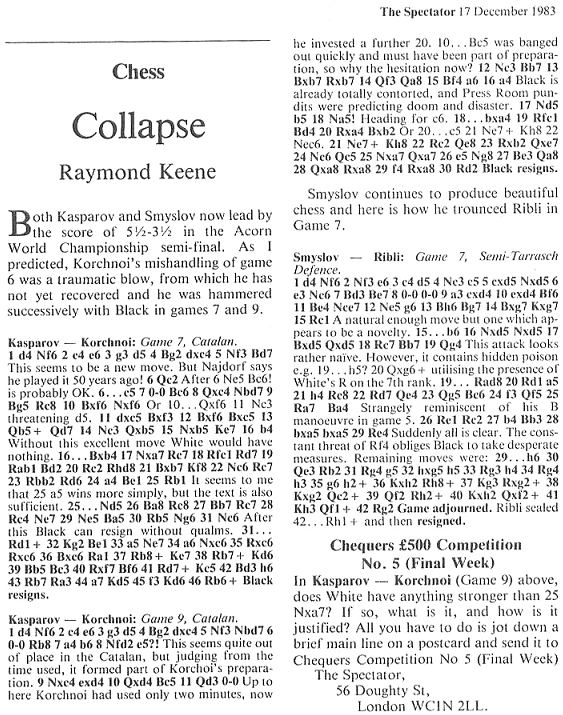 as indeed is game nine. 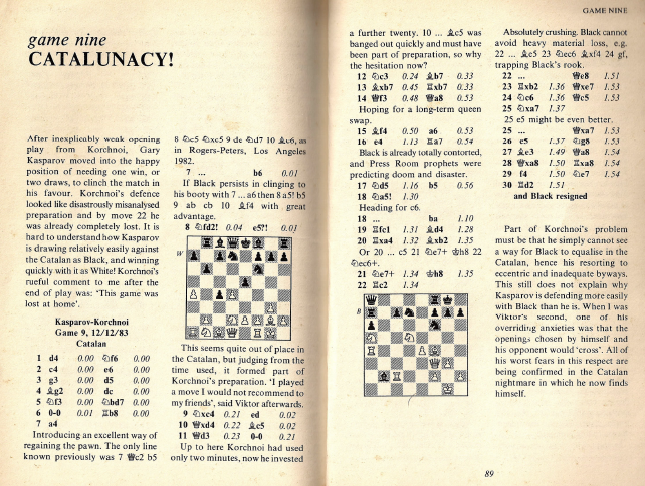 Again, we'll leave the remaining examples to the annex. (In some ways, with Ray, you can never make the point often enough. But in other ways, perhaps you can.)

But as readers will be aware, the book had more than one author: although much of it was written by Ray, parts of it (including the most unfortunate passage which we saw on Thursday) were written by Dominic Lawson. 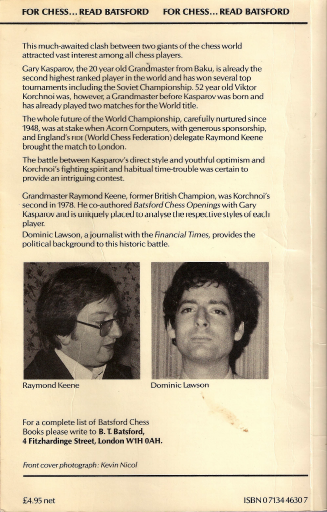 Now if Lawson actually says so, I'd be prepared to accept that he didn't know anything, at the time, about how Ray's parts of the book came to be produced. And assuming that he didn't (and knowing is better than assuming) I'd also be keen to know whether he ever did find out - and whether he approves.

I also wouldn't mind knowing what he feels about his chum's massive plagiarism habit, what with him being a professional journalist with a particular interest in issues of ethics.

It's an integrity thing.

Because integrity is important, isn't it?


EDIT: Tell you what, let's ask the man directly.

Sorry to bother you. I am a member of the English Chess Federation and I have some questions I wanted to ask you about your literary relationship with Raymond Keene.

1. When you co-wrote a book about the 1983 Kasparov-Korchnoi match with Raymond Keene, were you aware that large sections of the book were copied wholesale out of old Spectator columns, without readers being made aware of this?

3. You will of course know that over the past year or so Keene has been exposed in Private Eye and elsewhere as a massive plagiarist. You write frequently about ethical issues. What view do you take of Keene's recourse to plagiarism on such an enormous scale?

The Murei and Sax games in the introduction 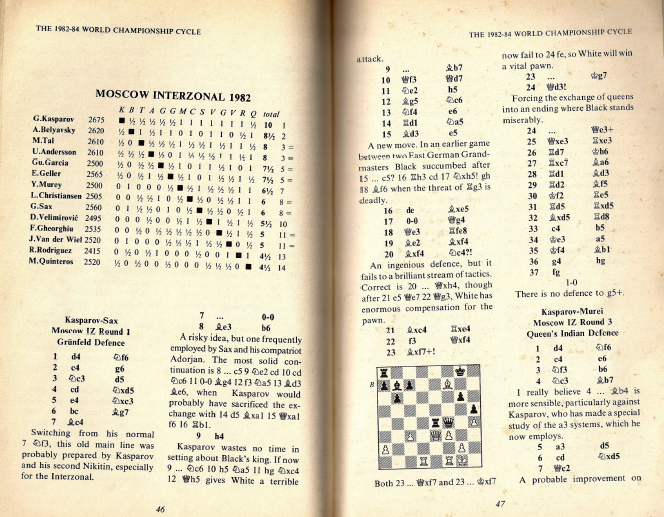 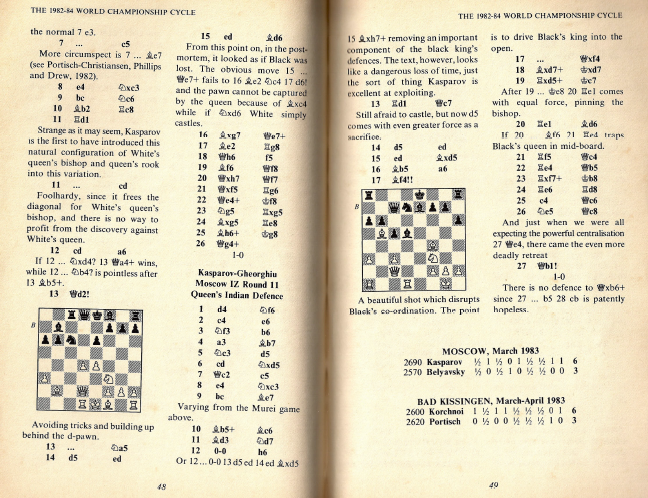 are both taken from the Spectator of 18 September 1982

but the Gheorghiu notes are from 2 October. 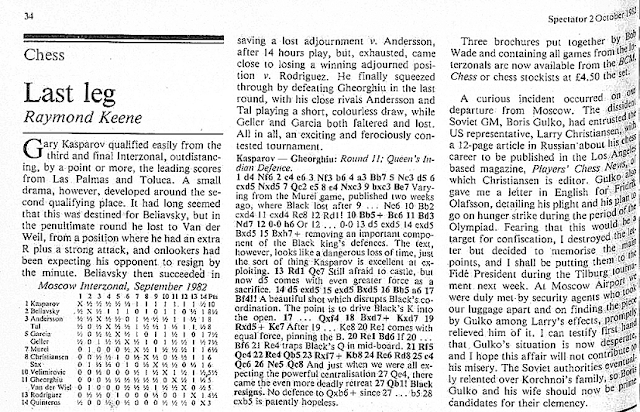 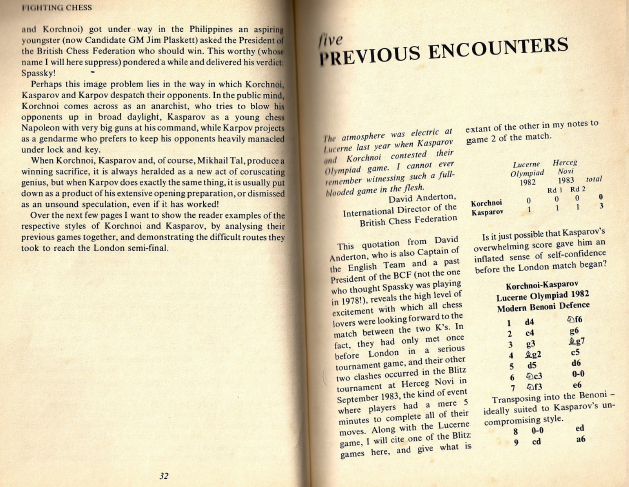 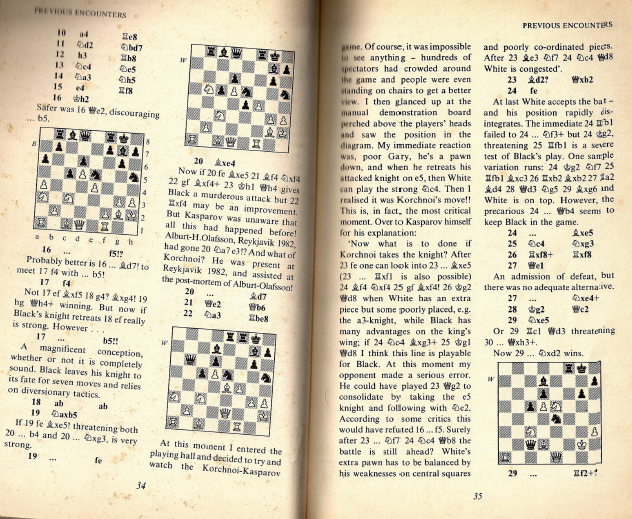 were borrowed from 20 November 1982 and are strictly speaking attributed to Andrew Whiteley! 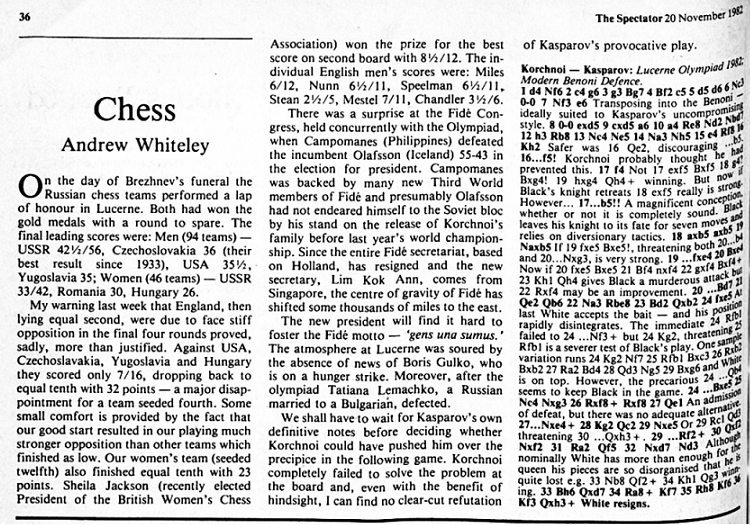 The notes to game ten of the match 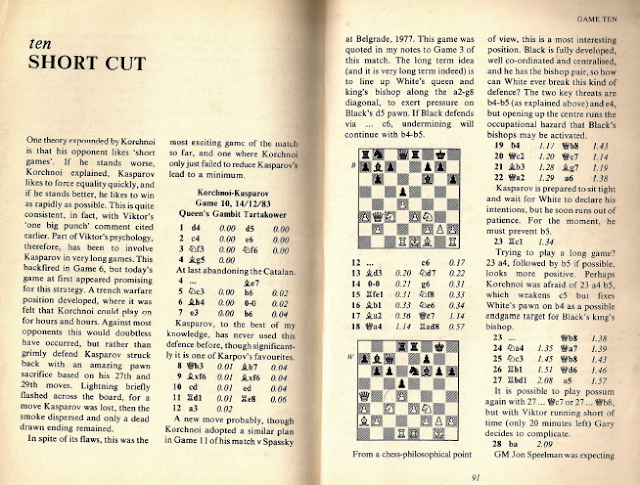 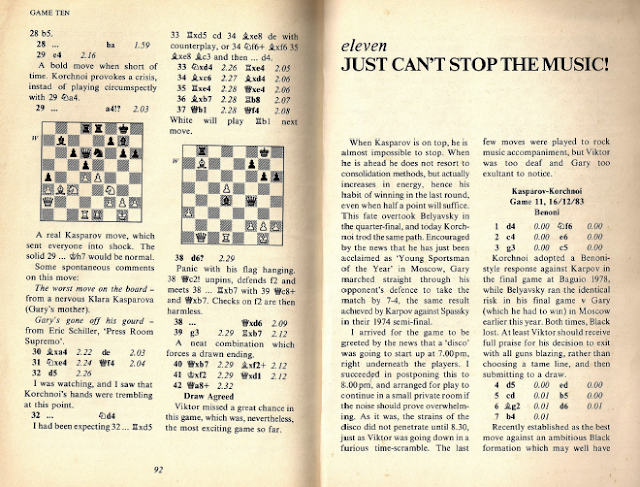 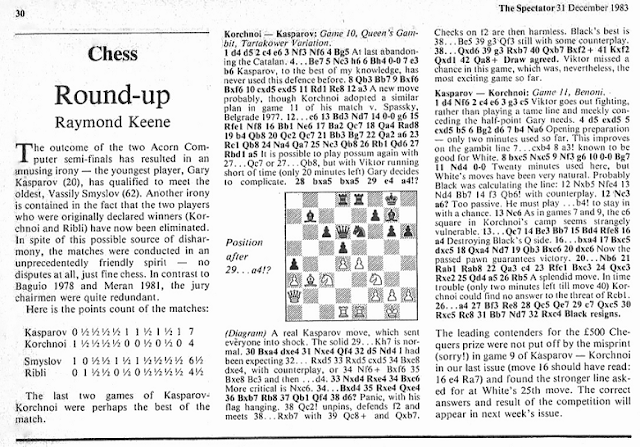 Game eleven is much more lightly copied, but readers will detect certain borrowings without difficulty. Finally, although the notes to game two itself don't appear to be copied... 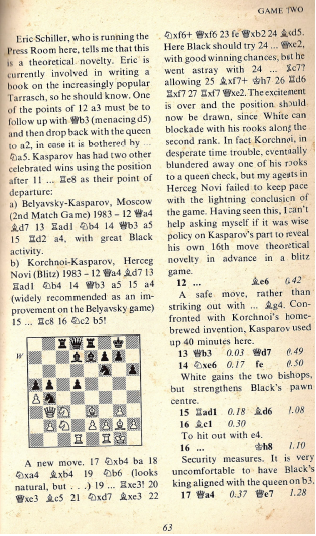 ...Ray didn't have to do everything himself. See if you can spot the copying! 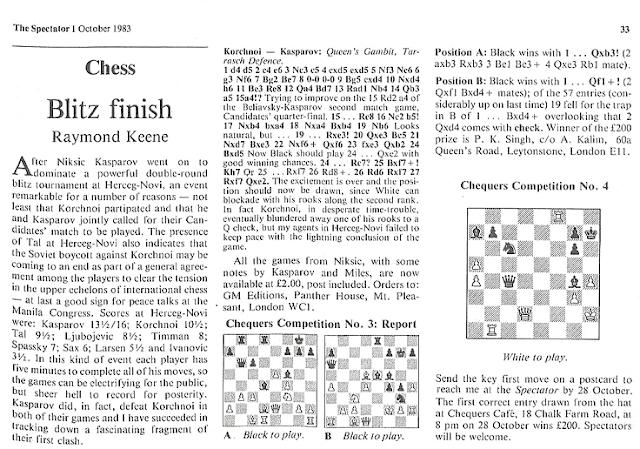 Back in the 1970s and 1980s it was common practice to produce instant books for important matches and tournaments. It first became mainstream chess publishing in 1972, Gligoric's book on Fischer-Spassky being one of the first. The common feature that these books shared was that they were usually based on the writer's newspaper and magazine reports. I don't recall any disputes between book and magazine publishers over copyright and attribution, so it was accepted practice even if not documented to standards a nit-picker might desire. It could be inferred the Spectator was fully aware of the instant book in 1983, not least because Keene's columns had been used as a book source for a similar publication on the 1978 match, to the well-documented disapproval of Korchnoi.

Endlessly recycling previous columns or other people's books is different. There was an established market for instant books in those pre-Internet days and repackaging newspaper and magazine columns supplied it. It also meant you got the material you wanted without needing to buy the entire magazine and archive the relevant cuttings.

so it was accepted practice

Not really though, since it was then, as it is now, proper practice to say so when you were publishing material that had previously appeared elsewhere, and Ray knew this damned well since he offered that information when he felt he had to. Just by chance, for instance, I happened the night before last to be looking at his book with David Goodman on the 1984 USSR-Rest of the World match, in which the authors give thanks for permission to reproduce notes.

Everybody knew what proper practice was, and is.

It is of course not just about copyright issues: it's about not cheating the reader by conning them into buying something they may have already seen and paid for. And I think everybody understood that too.