We had a first look at the two volumes of the Surrey County Chess Association Match Books, 1884-1967, in Preface, the opening episode in this, the third strand of posts on the chess history of our locality (see Streatham Strolls and Brixton Byways for the other two). Running these three in parallel inevitably means overlap and cross reference - but hopefully to mutual advantage rather than tedious repetition. This post is a case in point. It concerns one of Streatham's several en passant chess professionals and one of Tim Harding's Eminent Victorian Chess Players: Isidor Gunsberg (1854-1930). 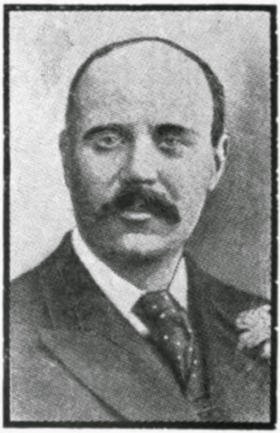 Here he is again, looking rather dapper, and rather more Edwardian than Victorian. It is as he appeared (according to the excellent Chess Archeology, from whence this picture comes) in 1905 in the American Chess Bulletin - which is just after Queen Victoria hung up her crown in 1903 - when he was about 50 years old.  Some time later Gunsberg, chess professional and one time contender for the World Championship (see here), appeared in the Match Books, playing for the Surrey County - which is perhaps surprising as these are a record of amateur matches. So what was he doing there?

Before documenting Gunsberg's appearances in the Match Book Volume 1, and picking over this curiosity, let's just recap briefly on his Streatham connections, as previously reported on the blog.

It was Jonathan B who first introduced readers to I.G.'s local associations by snapping one of his many addresses in our neighbourhood, the one at 47, Knollys Road.  The blog subsequently ticked off a couple more for him. One in Clapham South, and one in Streatham: 7, Woodfield Avenue (as the Kelly's Directory for 1930 confirms - thanks to John Brown of the Streatham Society for this detail), which is where Gunsberg ended his days (the building no longer stands). In response to the sad news of Gunsberg's death in 1930 the then Secretary of Streatham Chess Club, a Mr W. Spearman, fondly reminisced - in a letter to the Streatham News - about how he had encountered Mr G. in Mephisto mode at the Crystal Palace some 50 years earlier.

The Streatham News had also, some time before, reported Gunsberg's visit to a Streatham v Balham contest in October 1895, at which he took notes and offered advice to the combatants. He would then have been living in Brixton (this info from Tim Harding's EVCP), which perhaps explains his local interest.

But this was not to be the last time that he would support local chess: in 1920 and 1921 (when he was in his late 60s, and in the twilight of his chess career) he turned out for Surrey in county matches played nearby or in London - and this is intriguing as current opinion in Surrey chess circles has it that the County Association then, just as now, would not have paid anyone to play (due to a lack of both cash, and authority). Constitutionally short of money himself, Gunsberg was declared bankrupt in 1923 (detail from EVCP again) - but he may, one imagines, have played gratis to support his county, even if he might have been pleased if some anonymous benefactor had slipped him an appearance fee on the side.

There are four records of him playing for Surrey in the Match Books - with a fifth loose-leaf at the back.

On Saturday 10th April Gunsberg went the short few miles to Bromley to play 1st board against Kent. He drew with E. E.Middleton in a 91 board match. Here is the first page of the two-page record:

The Match Book gives details of the top 50 boards only, spread across two pages, with the first 25 on the page reproduced above; and it somehow fails to give the sub-total over those 50, or even the full 91 board result.

By my count the 50 board tally was 28.5/21.5 to Surrey, and according to Times of the 12 April, which reported the match, the full result was 57/35 (and that, oddly, adds up to 92, not the Match Book's 91). This "mammoth match" said the Times "was arranged for 100 players a side" (and somehow 8 or 9 boards went AWOL). The match "concluded proceedings" at the end of the Bromley Congress won by Sir G.A.Thomas. A certain Mr W.H. Watts may have had cause to rue his participation in Section D of the tournament when his game with the white pieces against Mr. R.E.Kemp finished abruptly: "(1) P-KB3, P-K3 (2) P-KKt4 Q-R5 Mate". To compound his embarrassment the score was given in the Times of 10 April.

Whether or not Gunsberg was happy with his own draw, he may been pleased to see the ladies in action for Kent: Mrs Holloway on board 8, Miss Finn on 20, and Mrs Stevenson on 23 - and together they scored 2.5. He had lectured at the Ladies Club some 20 years previously, of which Kate Belinda Finn (1870 -1932) had been an early member. She had also competed in the Ladies International Tournament in 1897, posting Irish nationality. According to Tim Harding's authoratitive articles here she retired on health grounds part-way into the tournament. 1897 was the year of this charming picture.
Miss Finn was British Ladies Champion in 1904. Playing above her on Board 8 was Edith Martha Holloway (1868-1956) the first post-WW1 British Ladies Champion (and she was playing above her husband, on board 16) - she was to win the Ladies Championship again in 1936 at the age of 68(!). A nice detail is that Mrs Holloway - then "one of the brightest names in British women's chess" - was the daughter of the sculptor John Denton Crittenden (c1834-1877). Chris Ravilious and Brian Denman (whose article here has been invaluable) say that she may have modelled for one of his works, a family group. I wonder if this, er, statuesque figure is her as well:
Mrs Stevenson, board 23, lived in Clapham but was a member, with her husband R.H.S.Stevenson, of Lewisham CC (and thus eligible for Kent; he was likely to have been the Kent match captain). She died tragically in August 1935 walking into a rotating aircraft propeller en route to the Women's World Championship in Warsaw (info from John Saunders' Britbase).

For yet a bit more Isidor, an actual game this time, we can turn to the 16 board match against Middlesex played a Central Hall, Westminster on 15 January 1921 - he lost on board 1 to A.C.Condé; and Surrey went down 7 - 9. The BCM in February said that "Gunsberg lost through trying to win a won game" [but see comments, and read this correctly as "a drawn game" MS] , and in April gave the game score as follows (adapted into algebraic notation, the notes are by E.G.Sargeant who had a ringside seat on board 2).


Gunsberg was back in action at the Central Hall just a few weeks later on Saturday February 26th against Kent again, also over 16 boards. R.P.Michell lost on board 1, while on board 2 Isidor was once more up against his nemesis Mr Middleton and no doubt thirsting for revenge, only to be frustrated as the latter was recorded as absent. Surrey was victorious: 11.5 to 4.5.

Both the above matches are on the same spread in the Match Book, and here is the Gunsberg detail:

Next we can log Gunsberg's participation in what was the first Croydon League v The Rest of Surrey match - to be a regular annual fixture until 1926. The 1921 edition (in what may have been the inaugural year of the League), on Saturday 30 April, was played at the Winterbourne Road Schools in Thornton Heath. It says something for the flourishing state of chess in the County that this should be another monster match of 100 boards with, on this occasion, Surrey running out winners 63 to 37. Gunsberg beat B.H.N.Stronach (of Brixton CC, playing for the Croydon League) on Board 1. 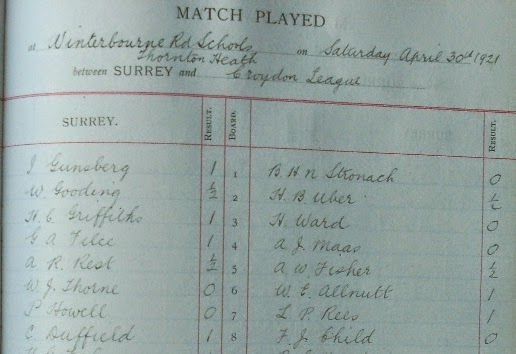 On account of their Clapham address the Stevensons here played for Surrey - he won on 20 from where he could watch his wife lose on 21. Mr Spearman (mentioned above) won on board 25, and was not, on this occasion it would seem, distracted by nostalgic thoughts of his fellow board 1 on Mephisto duty so many years before. Leonard Percy Rees, the architect of the Croydon League (and much else besides, as we noted in the first episode), won for them on board 7 - a kind of captain's innings.

We should round this post off with Gunsberg's appearance in what was hailed as a "World's Record Match" - on Saturday 16 April 1921 - even if that means backtracking a fortnight. Which we will: next time.

Excellent stuff as always, Martin. I'm interested in the Fool's Mate game from the Bromley Congress. W.H. Watts was a well known chess publisher, author and player of the time. I checked the contemporary report of the tournament in the BCM which reports that both Kemp and Watts scored no points in Section D. Watts was a pretty strong player who wouldn't have lost to Fool's Mate. So what actually happened? Did he have some reason for losing deliberately? Was the game declared void?

I like the phrase 'lost through trying to win a won game', although it doesn't really seem to correspond with the facts.

Also 'in these days of Ruy Lopezes and Queen's Pawns'. Nothing much changes there.

Those were the days - 100 board county matches and copperplate hand-written records.

Skulduggery, Richard. Looks like some side bets were placed...

John: "...lost through trying to win a won game": well, it's the story of my life (tho' seldom even a won game); and it's what it says in my notes from one slow afternoon in the British Library - but in cold the light of blog it does look a bit implausible. Does any one out there have BCM Feb 1921 to hand, and could look it up on page 59, please?

"Gunsberg lost through trying to win a drawn game" according to BCM Feb 1921.

"Allingham, with the consent of the Surrey match captain, played DuMont in Hospital, after an operation on his foot, damaged as a result of an accident, and did not suffer for his courtesy, losing a piece by an oversight."

Harold Miles Silvanus had played in 1920 Bromley Congress although the BCM misspelled his name as Sylvanus. Another competitor was the chessing dentist F. St. J. Steadman, who has recently been mentioned in Another Place. My 1920 BCM bound volume comes from the Birmingham Chess Club.

Thanks Richard. That's cleared up the "won game/drawn game" point.

Dr. Steadman was a member of Brixton Chess Club.

I misquoted the BCM: "...the latter losing a piece by an oversight".

R.H.S. Stevenson features large in the history of the S.C.C.U. being the secretary from 1911 to to 1938/9, a reasonable stint in anybody's book. He was around for so long that there is more than one trophy named after him, one (strictly its relacement) is currently awarded to the runner up in the Open section of the counties competetion (the Union stage). (More details on the SCCU website)